The Ironic Masculinity of Adrian Adonis

“Adorable” Adrian Adonis’ work in the ring spoke for itself. 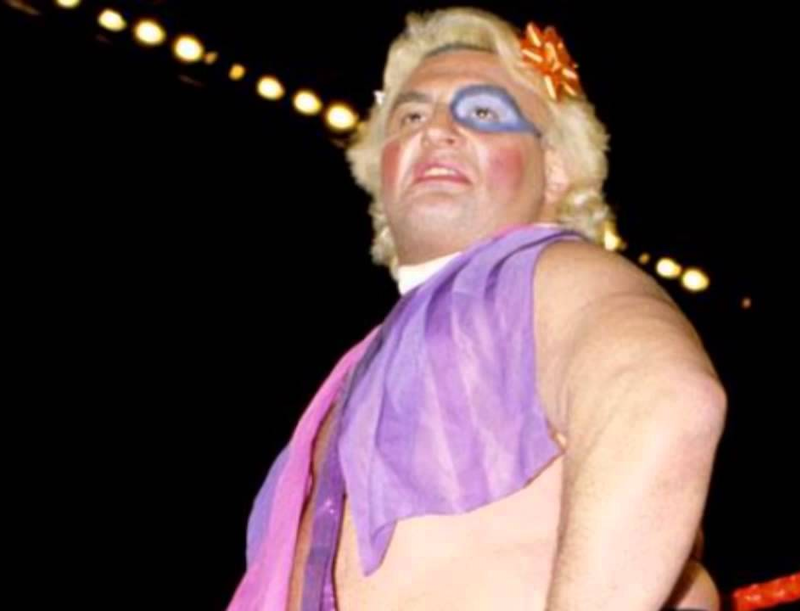 I was raised in principal part by a father who harbored an abiding and perhaps even excessive interest in hair care, musicals, fancy clothing, and domestic tasks such as cooking and cleaning. He was also a large, densely built former college football player with a violent temper. As a young boy, it seemed to me that these parts of his character were in constant tension; was he a gentle, artistic soul or a lumbering brute? I had my own problems in school and at home, however, so such questions were often put aside in favor of hours spent watching and reading about professional wrestling in my bedroom. While engaged in furious, secretive fandom, I was struck by the transgressive way in which many male performers chose to depict themselves. I’d no idea what "transgressive" meant much less why such depictions mattered in a broader social context, but my sense of puzzlement existed from the outset.

I doubt that these performers realized they were doing anything beyond entertaining the multitudes and eking out a grueling living that offered them neither health benefits nor days off.  Yet they were, in some small and unintentional way, suggesting a path forward to a generation of impressionable viewers. In The Arena of Masculinity, University of Toronto professor Brian Pronger argued that the irony of male homosexuality offered the potential to gradually but significantly undermine hegemonic, orthodox masculinity:

With the clarity of a gay ironic perspective, orthodox masculinity is dismissed as insignificant and paradox is allowed to shine. So that while lifting heavy weights one needn't pretend to be what one is not. It proves that you don't have to be butch to be strong; you don't have to be masculine to be an athlete. That insight has great power. It destroys the athletic arena of masculinity, exposing athletic masculinity as nothing more than a myth. Irony is power, the power to destroy superficiality, in this case, orthodox masculinity.

My sole criticism of Pronger's book is that this ironic perspective needn't extend only to males who are exclusively or even mostly homosexual. I've had a long and enjoyable sideline in competitive athletics that has, at least in part, involved lifting some heavy weights; at no point in the process was I ever pretending to be someone I wasn't. That point seemed clear enough, inarguable really, to anyone who spent as much of their youth obsessing over the work of provocative WWE star “Adorable” Adrian Adonis.

Wrestling under that alliterative "Adrian Adonis” alias, Keith Franke worked a rather typical tough-guy heel gimmick: leather jacket, rule-breaking attitude, taunt-laden interviews. Franke was, for the better part of his career, a technically proficient if largely unspectacular middle-of-the-card professional wrestler. He enjoyed successful runs as the tag team partner for charismatic villains such as Jesse "The Body" Ventura and “Captain Redneck” Dick Murdoch, carrying them in the ring in much the same way that they supported him on the mic.

As his career neared its conclusion, Franke, who’d spent most of the 1980s employed by the WWE, was transitioned by Vince McMahon from badass motorcycle biker tag team champion to gimmicky caricature. McMahon, who later crafted an angle wherein an African-American strongman would impregnate an 80-year-old female pro wrestler and who’d entertain thoughts of running an incest storyline with his own daughter, repurposed the overweight and nearly washed-up grappler as "Adorable" Adrian Adonis, an updating of the "gay gimmick" that had successfully drawn heat from crowds since the halcyon days of Gorgeous George. What's perhaps overlooked by history is the fact that "Adorable" Adonis, like Adrian Street and Gorgeous George before him, was never portrayed as an explicitly homosexual character (frequent references to his "San Francisco fans" aside), merely an effeminate and shockingly brutal villain who went to great lengths to emasculate his opponents.

Owing to Franke's considerable wrestling ability—his skill as a chain wrestler and bump-taker somehow remained intact despite the fact that he was by this point well over 300 pounds and completely out of shape—the Adonis character came off, at least to a naive young version of me, as genuinely menacing. His well-worked "hair versus hair" match with "Rowdy" Roddy Piper at Wrestlemania III, which saw the mammoth Franke taking bumps and falls that would have made the legendarily masochistic Ric Flair proud, proved far more compelling than the Hulk Hogan/Andre the Giant main event. Although the bout ended with Adonis having his bleached-blonde locks shorn by interloping good guy Brutus "The Barber" Beefcake, my sympathies were with the villain.

That was pretty much the end for Adonis, whose in-ring performance deteriorated significantly as his well-publicized substance abuse problems worsened. A last-gasp comeback that saw him sober and 50 pounds lighter was ended prematurely by the unfortunate automobile accident that took his life.

There were others like Adrian Adonis, of course. Dusty Rhodes, an endomorphic former lineman at the West Texas State (now West Texas A&M University) turned lisping, rhyming, ass-wiggling, and belly-jiggling spokesperson for the "common man." Dusty's son Dustin, reached his greatest fame playing the androgynous, masculinity-imperiling Goldust character. Handsomely mustached "Ravishing" Rick Rude saw nothing wrong with performing a seductive striptease that seemed to be intended for gay male viewers rather than the scattered handfuls of women in attendance at the arena. Jesse "The Body" Ventura never met a feather boa he didn't like. But it was Adonis whose example most resonated with me.

Adrian Adonis was, like my father, a superlative if unprepossessing athlete; both played oddly effeminate characters with hard, menacing edges. Except my father wasn't playing. I'm not sure what he was doing, actually. But he did somehow succeed at instilling in me a contempt for thoughtless, knee-jerk masculinity: sitting at a bar, guzzling beers and remarking carelessly about women and past sporting exploits, was anathema to him. His own views about women were hardly progressive, colored as they were by the prejudices of his 1940s childhood and the tiny community in which he was raised, but neither did they bear any relation to the sort of thoughtless misogyny that continues to manifest itself whenever men are assembled in large clusters.

Adonis was perfectly capable of sashaying to the ring, then "blading" both himself and his opponent as they proceeded to deal pretend-yet-real damage throughout a 15-minute match. Perhaps alone among the innumerable users of the “gay gimmick” in wrestling, Adonis overcame this central tension between masculine and feminine: he was an obnoxious asshole who transcended easy categorization. While watching old WWE Network footage of Adonis—already dead by 199—kick the crap out of whatever less talented opponent had been set against him by Vince McMahon or head matchmaker Pat Patterson (McMahon's right-hand man and quite possibly the most successful openly, albeit discreetly, gay professional athlete of the 1960s and '70s), I struggled to fit together the conflicting, contradictory pieces of myself.

It’s a silly and solipsistic question: "Who am I?" As if the answer to that question was as important as life itself, as if the question's resolution meant anything to anyone who wasn't you. But while the answer matters little, the process of arriving at it, when shared with others, can be of significant value. My father, trapped in this gender paradox, in turn demanded that my half-brother and I display the unbridled manliness and aggression that enabled him to succeed on the football field. Although both of us came to look the part, and could when prodded act the part, such pressure was too much to bear. My father’s own contradictory behaviors, the ways in which he and Adonis and many others weren't manly, proved far more instructive.

I spent many years working in academia, where refinement and intelligence allegedly rule the day, and in which it was possible that my down-to-earth manner of self-presentation and meathead tendencies were viewed at times with bemusement or even suspicion. But I long ago reconciled these contradictions; I’m not what I am, and, like Adrian Adonis, I prefer to let my work speak for itself and let the listener arrive at their own answers. This is no grand solution to more deeply rooted and intractable problems of gender construction in our society, but it’s one way of obviating pressures to conform to orthodox gender roles, pressures that are sometimes felt every bit as acutely by men as they are by women.