Transphobia in the WWE

World-renowned strongman Mark Henry participated in one of the most transphobic moments in sports entertainment history. 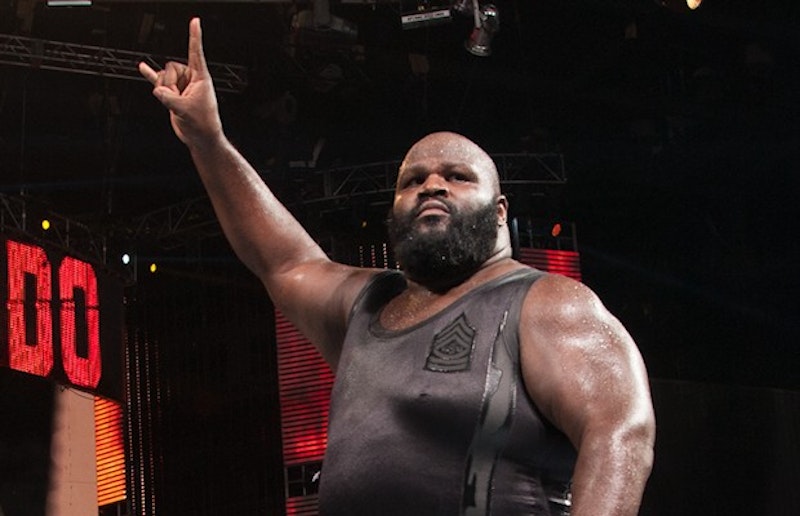 Stop me if you've heard this one: a guy is either getting intimate or is about to get intimate with a person he assumes to be a cisgender woman. At some point in the proceedings, the other person is revealed to have the “wrong” sex organs. The guy, who was mere seconds away from absolute bliss, proceeds to go apeshit, leaping around the room, shrieking like a banshee, and otherwise reaffirming his 100 percent red-blooded heteronormative credentials. Dramatic irony at its finest, as everyone from Some Like It Hot's Billy Wilder to It's Always Sunny in Philadelphia's Rob McElhenney has discovered.

Although one can't abolish all instances of the loathsome "tranny trick" any more than one can totally efface blackface from the historical record, evolving cultural norms have transformed what had once been reliable comedic fodder from decades past into something that warrants present-day trigger warnings. Witness, for example, this scene from WWE performer/world-class strongman Mark Henry's late-1990s run as "Sexual Chocolate.” Or don't witness it, since it’s both trigger warning-worthy and more than a bit cringe-inducing.

Autres temps, autres mœurs, indeed! Were the late-'90s really such a cultural wasteland, and were we teenage males such barbarians, that something so undeniably vulgar slipped through the cracks without public condemnation? Mind you, Henry's received shoddy treatment from the WWE since the beginning of his wrestling career, but this particular incident stands out even among the corpse-rapings, home invasions, and bra-and-panty mud matches that characterized the "Attitude Era."

To recap the bit, for those of you who lack the stomach to watch:

Mark Henry, who is infatuated with the pro wrestler Chyna, is left to his own devices with one of Chyna's ostensibly female friends. Henry, who is playing a sex addict ("Sexual Chocolate"), is seduced by this woman, and allows her to perform oral sex on him. While attempting to reach under the woman's skirt, Henry receives what to him is an unwelcome surprise. He reacts in the exaggerated manner of most ham actors, then takes things to the next level when he runs into a nearby bathroom and vomits into the commode.

Mark Henry's mother and thousands of other fans, some not even in their teens, are watching this sketch as it plays out. Chyna, who is working a "confounding gender expectations" gimmick as a muscular woman who wrestles men, comes back on camera to complete the emasculation of Mark Henry. Her friend is revealed as complicit in this angle, so eager were they to "tear off a piece" of the massive Henry.

So I'm left to write: WTF? There was no blogosphere in this Web 1.0 era, and no group of concerned netizens available to register their disdain at this deplorable sequence. But it bears reexamination now, because it's indicative of everything that remains flawed and fractured about our understanding of gender as distinct from the biological notion of sex.

The "victim," of course, is meant to be Henry. He's the butt of the joke, a joke so foul that he's left retching up his guts in the toilet despite the fact that he undoubtedly enjoyed what had just transpired prior to learning the "awful truth" about his paramour. But what of the trans person who performs oral sex on him? Are they also a victim? A manipulator? Is manipulation the only way that a "real man" such as Henry would consent to be touched by an individual he'd likely demean with a pejorative term such as "she-male" or "female impersonator?"

Issues of race, masculinity, power, and privilege abound in that clip, but it can't be redeemed as satire or written off as farce. For all his accomplishments as a businessman and promoter, WWE chairman Vince McMahon was a tone-deaf humorist at best. Here the trope he chooses to invoke is already so fraught that he can't fail to make a complete hash of it.

Is this little takedown enough to bury such a hackneyed and half-baked approach to drawing cheap laughter? Likely no, if its recurrence on crude sitcoms such as It's Always Sunny in Philadelphia is any indication. Many, including McMahon and Sunny's creator Rob McElhenney, would likely contend that nothing is sacred, that everything is fair game as far as comedy is concerned. And I suppose they'd be partially right, because anything can conceivably amuse the multitudes, but they'd also be completely wrong, because issues of human worth and worthlessness are no laughing matter.

As for Henry, what did he think? When asked in 2015 to pinpoint the moment when the WWE’s “Attitude Era” went too far, he didn’t mention this one. “I guess it was seeing Mankind and Undertaker in that Hell in the Cell match, jumping off the top,” he told Digital Spy. “I thought that was a little much.”