Retired pro wrestler Big Van Vader's feats of athletic derring-do are one of my most distinct childhood memories. 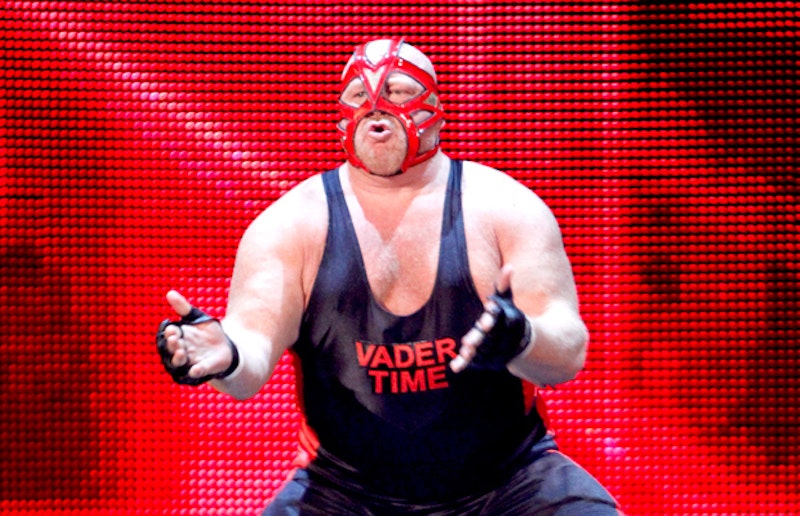 I refuse to dwell on my childhood, which means I’ll probably never be able to write the kind of abuse-laden bildungsroman that used to top the bestseller charts and win recognition from Oprah’s Book Club. That’s a shame, because like most of us lazy freelancing Millennials, I could really use the money right now.

Professional wrestling, particularly the NWA-into-WCW wrestling of 1989-1995, occupies a place of prominence in those few memories I’ve bothered to keep around. No one else in my family besides my meathead father cared about it—rightfully so, given that it's ridiculous—and I was left alone to consume as much of it as I wanted.

Each appearance by a wrestler who struck my fancy prompted an expensive dip into the archives. I bought back issues of the “Bill Apter mags,” participated in VHS tape trading, and, upon becoming fascinated by NWA promoter Jim Crockett’s importation of Japanese talent in late 1989, purchased Japanese wrestling videos.

That was a huge waste of time and money. Although I became knowledgeable about pro wrestling, it was to the detriment of other aspects of my life. I was never picked on by the other kids in school, but also never enjoyed their company. I wanted to be left alone with my videos.

What I enjoyed were performances by Dusty “The American Dream” Rhodes. Rhodes, who was probably the favorite wrestler of at least half of the kids growing up in the New South, never let his obesity get in the way of scintillating interviews and well-worked 30-minute draws with the likes of Ric Flair and “Superstar” Billy Graham. During his most important matches, he almost always “bladed” or “gigged” the purplish patch of scar tissue on his forehead—a creative decision that enhanced the legitimacy of his efforts, and distinguished Southern wrestling from the bloodless squash matches staged by Vince McMahon’s cartoonish WWE.

By 1990, though, Dusty began to decline as an in-ring performer. When he bolted WCW for a brief, polka-dotted run in the WWE, I gave up on him. Not that it would have mattered: Once I saw Leon “Big Van Vader” White demolish Tom “Z-Man” Zenk at the Great American Bash in 1990, I had a new obsession.

I’d always admired the sport’s so-called “giants”—huge, overweight men like Bam Bam Bigelow, Kamala, John “Earthquake” Tenta, King Kong Bundy, and the One Man Gang—but most of these grapplers were immobile and unathletic. Some, like the legendary British super heavyweight Giant Haystacks, appeared to be in danger of suffering from heart failure each time they stepped into the ring. Promoters went out of their way to depict these men as unstoppable monsters, but few of them seemed particularly imposing.

Big Van Vader, by contrast, was an absolute beast: He wrestled stiff, often throwing hard punches instead of the lazy “potatoes” delivered by most wannabe tough-guy grapplers, and manhandled the opposition. Unlike other wrestlers of the era, he didn’t need his foes to leap into his power bombs or assist him when he pressed them overhead. From the outset, he struck me as more than a mere performer; what he did in the ring looked real.

In 1992, I watched a tape of a match in which Vader, representing New Japan Pro Wrestling, wrestled Stan Hansen, another badass gaijin performer for Giant Baba’s All Japan Pro Wrestling outfit. This is still the match most people associate with Vader (well, this match or the one in Germany where he was wrestling Mick “Cactus Jack” Foley and Foley wound up losing a chunk of his ear).

Hansen, who was near-sighted and even more prone than Vader to landing stiff punches, opened the match by breaking Vader’s nose with his bullwhip. After an exchange of blows, Hansen dislodged Vader’s eye from its socket. What followed was a wonderful moment in which Vader, who was wearing a black mask, leaned back against the turnbuckle to remove the mask and push the eye back into its socket. When he turned to face the camera, we saw that Vader’s injured eye had swollen to the size of a grapefruit. Then he completed the match. I was amazed.

In the early-'90s, I still didn’t grasp the intricacies of the pro wrestling industry. Although I consumed VHS tapes of un-dubbed, un-subtitled NJPW matches, I remained unsure of what was actually happening in Japan. I realized Antonio Inoki, the owner of that promotion, was some kind of a big deal. I understood that wrestlers such as Keji Mutoh and Tatsumi Fujinami were top stars, and far superior performers to juiced-up freaks topping the cards in the WWE. Nonetheless, everything happening in Japan struck me as mysterious and compelling: the matches were presented without storyline buildup, almost as if they were actual sporting events, and the quality of the work was far rougher than the US equivalent.

Even by those standards, what happened between Vader and Hansen was unbelievable. It was, for reasons that are now obscure, perceived by my pre-teen self as the greatest thing that had ever happened. I’d always viewed sports stars with a certain kind of apathy—Joe Montana and Michael Jordan were too slick, too polished for my liking—but Vader was awe-inspiring.

I stand by that assessment. Leon White began his sporting life as an offensive lineman for the LA Rams, segued into real estate development, lost a crapload of money in that venture, started wrestling in the AWA as “Bull Power” under the tutelage of Greco-Roman specialist Brad Rheingans, and then was given his Big Van Vader gimmick by Inoki. After that, he proceeded to become the best super heavyweight wrestler of all time. He moved better than the Undertaker, he was scarier than Andre the Giant, and he had as much raw strength as Mark Henry. Here was a 400-pound man who could perform moonsaults, hurl wrestlers unaided into the air, and take ridiculous bumps.

Vader’s matches against Sting, the best worker among the various babyface main event wrestlers of the late-'80s and '90s, were classics. His series of bouts versus Mick Foley in 1993, including a bloody brawl on WCW Saturday Night and a Texas Death match at that year’s Halloween Havoc, trumped anything Foley did before or since, including his legendary Hell in a Cell showdown against the Undertaker. Even Vader's WWE work, most notably his feud with Shawn Michaels, still holds up.

But Vader proved a very difficult person to work with, at one point trading blows backstage with Paul “Mr. Wonderful” Orndorff and later attacking a talk show host on “Good Morning Kuwait.” He got fatter and slower as his career progressed, understandable given that his peak years had come during middle age. His final appearances in TNA and WWE were phoned-in, lackluster.

I suppose many people wallow in the past. How else, after all, could one explain the spate of raunchy teen comedies written by 50-year-olds starring 40-year-olds that are marketed to 30-year-olds? However, I have nothing noteworthy about which to wax nostalgic. My youth is a faraway and alien country, accessible only through YouTube videos of beefy, bloated men trading chair-shots and dragging razor blades across their foreheads. Those grainy clips remind me that Vader used to be my hero, whatever that meant at the time.

It’s one of the few things I don’t want to forget.