Shogun Warriors join together for nothing in particular. 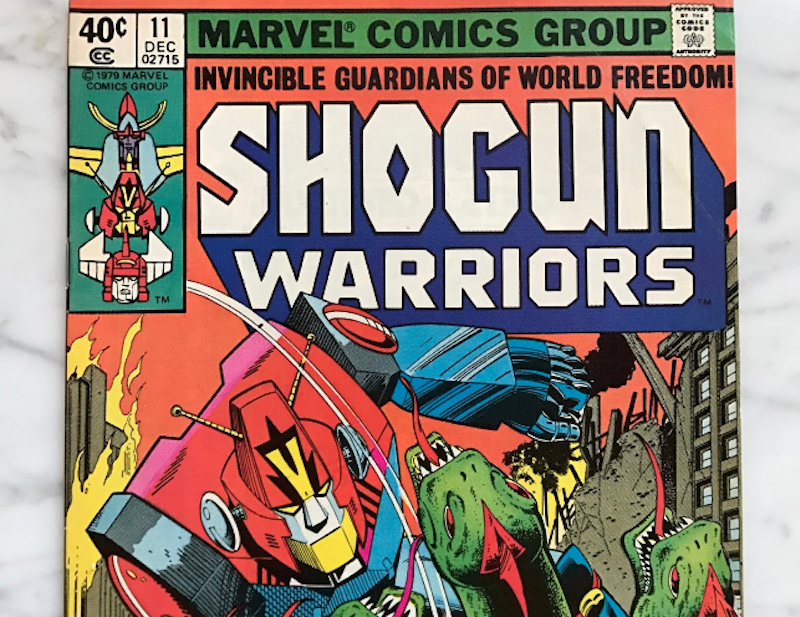 This is part of a series of posts rereading comics from my childhood. The last one on Jack Kirby's Captain America is here.

“The Hand of Fate”

Shogun Warriors, for those who didn't see television toy commercials in the 1970s, were giant battle robots—somewhat like less successful transformers. They also, according to this comic that I’ve virtually no memory of purchasing or reading, were able to break themselves up into a bunch of smaller robot vehicles. This is supposed to be really cool. The centerpiece of the story involves protagonist Genji Odashu giving the command to split her Shogun Warrior Combatra into robot-controlled battle components as she fights a giant hand with five-dragon heads in Tokyo. Shockingly, the dragon heads themselves can detach from the giant green hand, so it's a five-on-five battle of robot parts vs. dragon-hand heads until scripter Doug Moensch runs out of space and decides to put everyone back together again.

The big robot that’s made up of small robots isn't just a nifty gimmick; it's also a metaphor for the comic’s central theme of Three Musketeers-esque solidarity. The three Shogun Warriors—Combatra, Dangard Ace, and Raydeen—are spread out across the globe. Combatra is, again, controlled by Japanese pilot Genji Odashu, who lives in Japan; Dangard Ace, piloted by African marine scientist Ilongo Savage, and Raydeen, which is not toothpaste, but yet another giant robot controlled by American test driver Richard Carson. Compared to most Marvel comics of the time—or for that matter of today—a superteam with only one white guy was (and is) unusual. So is having a comic that isn't relentlessly focused on the United States.

In Shogun Warriors, villains and heroes alike realize (unlike many of their peers) that a threat to the world means a threat to more than just North America. In 2017, Ghost in the Shell whitewashed its main character, but in 1979, Shogun Warriors kept faith with its Japanese origins and its Western audience both by creating a super-series in which Japan, North America, and the rest of the world were all part of a single planetary narrative, drawn together like dragon heads in a single hand. "There's something about being a shogun… that makes you… well, brothers …almost merged together," Richard Carson muses to his jealous girlfriend Deena. Different races and nationalities come together like pieces of a giant robot to smash monsters.

It's inspirational, heart-warming, and a little silly. But in comparison to contemporary superhero films, it does a decent job of inclusivity. Yes, the remote leader of the team is inevitably some mysterious mustachioed bald white guy scientist. But, on the other hand, it's Genji—the woman of color—who gets the bulk of the action. She even flips the usual gendered script, and reveals her secret identity to her weeping boyfriend right before she tells him she's got to ramble and whooshes off with her giant robot into the sky. Unity in diversity in this comic doesn't mean, "lots of different people defer to the white guy," a la Black Mirror's "USS Callister." Given the era and the competition, that's somewhat commendable.

The multiple bits coming together to form a whole is also an analogy for the structure of the comic itself—though here the result is less a giant, powerful machine, and more a pile of discarded, semi-rusted hunks of metal in a junkyard. The narrative is supposed to be part of a serialized story arc involving a number of attacks on the Shogun Warriors, leading to a showdown. Ideally, in serialized fiction, each episode or issue would involve an adventure in itself, advancing plot and characterization alike. The issue should stand alone, the way that Combatra's foot can turn into a tank and drive off and shoot at a dragon head.

Shogun Warriors isn't a tank; though; it's like a sad lone tread and a bit of a turret gun abandoned in a convenient corner.  The battle with the dragon hand, it turns out, was just a test of some sort; the critter doesn't bother to finish the fight, just flies away when the page count starts to run out. Character development is mostly along the lines of "there are other Shogun Warriors out there, and they have romantic interests." The last page shows scientists looking earnestly at some meteor. The comic doesn't have the goofy trope bricolage of the Tarzan comics of the time, nor the logical consistency and actual forward momentum of the Claremont/Byrne X-Men. And it isn't as visually inventive as the best manga or anime; the five-dragon-headed hand is ridiculous and fun, but one cute gimmick isn't enough to build a whole story around.

Thirty-five years later, I still don't know what that meteor meant—and I don't really care. Shogun Warriors was part of my past, but even in retrospect, it’s not an important part. It doesn't fit into anything bigger or cooler; it's just a mediocre comic.