A forgotten funny animal comic pointed one four-fingered paw to the future. 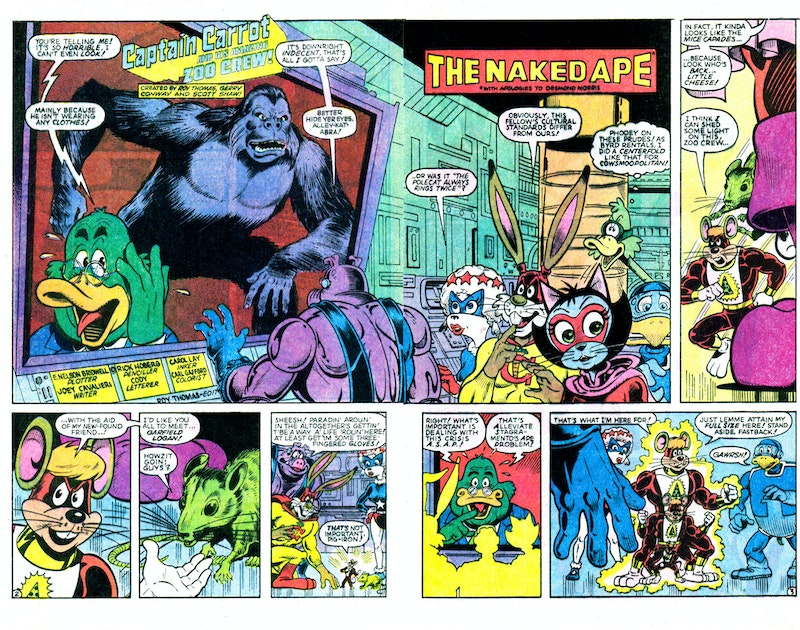 "The Macabre Menace of the Mammal Called Armordillo!"

Captain Carrot and the Amazing Zoo Crew is an odd comic in retrospect not because it's unfamiliar, but because it's so mainstream.

The series by Roy Thomas and Scott Shaw! was one of the more obscure DC titles of the early 1980s; a light humor mash-up of superheroes and funny animals which ran for a couple of years before vanishing with little fanfare. The comic is set on a world where all the people are cartoon bunnies, pigs, cats and frogs. A small group of assorted cartoon beasts is given powers by some meteor fragments and band together to fight nefarious cartoonish threats.

As a kid I enjoyed Captain Carrot's light-hearted fuddy-duddy humor and cheerful self-parody. I continue to find superheroes named Pig Iron and Yankee Poodle pretty funny, and Captain Carrot storing his Roger Rabbit street clothes in a filing cabinet under "Q" ("Quadrille! Quadron! Quadruplet! Ah, here they are!") still made me giggle on the re-read. This isn't great art, but it's amusing and inoffensive and the mysterious supervillain boasts about his skills creating shadow puppets.

Captain Carrot faded out in part because superhero comics got more adult and ambitious. In Captain Carrot #2 there's a somewhat incongruous ad for the new Swamp Thing, which would eventually be taken over by Alan Moore—he of V for Vendetta and Watchmen. Stories about super bunnies musing about how their super-carrots could use more salt were on the way out; grim meditations on vigilantism and the cold war were rolling in.

Or so it seemed at the time. Some 30 years later, Captain Carrot looks less like an obsolete curiosity, and more like a formula for minting millions. Superhero films these days aren't generally dark and ambitious. They're a good-natured, formulaic mix of humor and heroics. Guardians of the Galaxy even features a funny animal superhero Rocket Raccoon, and a funny cartoon plant in Groot.

Captain Carrot #2 foreshadows Guardian of the Galaxy in other ways as well. The story features Pig Iron, a mild-mannered cartoon pig steel worker who fell into the metal works along with a meteor fragment, and emerged as a much less mild-mannered giant metal hog. Pig Iron helped the Zoo Crew fight a giant starfish in issue 1 (don't ask). But after that, the Swine of Steel decides he doesn't want to join a superteam, but would prefer to enjoy his newfound super-strength on his own. As he explains in vernacular obviously lifted from the Fantastic Four's mighty Thing, "I don't need nobody! I'm Pig Iron, do ya hear me? PIG-IRON!"

The Zoo Crew tries to convince Pig Iron to stay by punching him, as superheroes do. The battle ends when he is whisked away by a super villain with a giant super-armadillo as a henchbeast. Pig Iron learns there are some problems he can't thump by himself, and he rededicates himself to the Zoo Crew team, letting fall a single enormous pig tear.

This is a simplistic funny animal moral about teamwork and friendship and how you should be willing to rely on others. But that same moral gets trotted out in virtually every big budget superhero extravaganza. Guardians of the Galaxy, Thor: Ragnarok, Justice League—all of them are about cranky superfolks who don't want to work together. The superfolks tell goofy jokes, get into fights with each other and eventually understand they really need friendship and love if they're going to save the world and/or hit other people with greater effectiveness. The moral of lighthearted superhero team stories is always that light-hearted superteams are good. Join together, because the plot demands you join together, is the familiar rallying cry. Yankee Poodle, a Hollywood gossip columnist in her secret identity, has the right idea when she demands series rights to the Zoo Crew, forecasting box office bonanzas to come.

The key to Captain Carrot is that it's funny, but not too funny. The characters are all cartoon animals, and you're supposed to laugh at that, but the plots never go into actual Looney Tune territory. Nor, on the other hand, does Captain Carrot ever mock the ideals of superherodom, like the Adam West Batman series or the wonderfully bizarre comic Flaming Carrot. The super-powered bunny and his pals look weird and wacky, by superhero standards. But beneath their fuzzy hides, you can see the outlines of Chris Pratt and Ben Affleck, straining to make a quip, punch a bad guy, and learn a heart-warming moral. Pig Iron may be forgotten, but the Porcine Powerhouse is still on our team.