He’s mean, not so lean, and wants to feed asparagus to Americans. 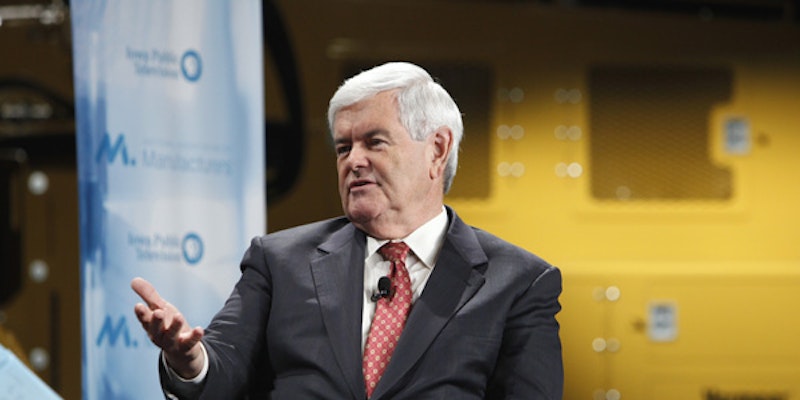 One day last week I was jawboning with a longtime friend at an anachronistic coffee shop in the affluent north Baltimore neighborhood of Roland Park. Eddie’s an impeccably-mannered gent in his early 70s, and, like me, is an economic conservative who has zero time for the religious zealots in the Republican Party, but figures in the upcoming presidential election social issues like abortion and gay marriage—isn’t it astounding that there’re still impassioned arguments over basic human rights?—will thankfully take a back seat to America’s imperiled economy.

Eddie’s like a lot of Republicans: unconvinced that putative front-runner Mitt Romney, even if elected, will be much of an improvement over Jimmy… Barack Obama. He’s flitted from Mitch Daniels to Jon Huntsman to Herman Cain, while ignoring kooks like Rick Santorum and Michele Bachmann. Last September he’d tentatively, and reluctantly, given Rick Perry a look, but after the current Texas governor bombed in the debates, making George W. Bush appear like the linguistic equivalent of William F. Buckley or John Barth, dismissed that candidacy.

Which, last week, brought us to Newt, a conversation that last June (after the former Speaker’s staff quit en masse) didn’t figure to be in the cards. I began on a light note, marveling that a reviled politician like Newt still has the celebrity heft to be referred by just one name, sort of like Cher, Madonna, A-Rod, Drake, Divine and Beyonce. The last politician afforded this shorthand was Lyndon Johnson, dubbed simply LBJ; just like his predecessors JFK and Ike. Admirers and enemies alike referred to Robert Kennedy as Bobby. Anyway, Eddie wasn’t quite ready to jump aboard spaceship Newt, citing his “weirdness about animals and bad fiction,” but the Georgian has commanded his attention.

The Wall Street Journal’s Dorothy Rabinowitz, who writes with uncommon elegance and clarity, whether on politics, television or child-abuse scandals, had written a column in the paper that day, raising the possibility that Newt’s hour had arrived—fortuitous timing given that the Jan. 3 Iowa caucuses are nearly upon us—mostly because of his clear superiority in the endless Republican debates, in which he’s demonstrated both a command of English and the issues, as well as a crowd-pleasing disdain for the media. If Newt can raise money and knock Romney off his robotic game plan, Rabinowitz implies, he might emerge as the GOP nominee.

Rabinowitz, in recounting a candidates’ forum in Iowa last month, wrote: “Mr. Gingrich predicted, too, that late on Election night—after it was clear that President Obama had been defeated along with the Democrats in the Senate—the recovery would begin, at once. His audience roared with pleasure. No other Republican candidate could have made the promise so persuasive. Mr. Gingrich announced that as the Republican nominee he would challenge President Obama to seven Lincoln-Douglas-style debates. ‘I think I can represent American exceptionalism, free enterprise, the rights of private property and the Constitution, better than he can represent class warfare, bureaucratic socialism, weakness in foreign policy, and total confusion in the economy.”

I take no pride in the admission that this year I’ve completely whiffed on political predictions. I thought Daniels (and before that, John Thune) would be Obama’s strongest challenger, but he skipped the race. More embarrassingly, in light of recent events, just a few months ago I speculated that Perry—his God malarkey notwithstanding—was a far better candidate than Romney. I didn’t anticipate Perry’s utter failure at participating in softball debates. Today’s political culture is far too bizarre, I’ve concluded, to play Nostradamus. As I wrote in this space last month, it wouldn’t be a bad idea for pundits to take a few weeks off from the campaign, and spare themselves looking like fools for hanging on every daily Tweet, gaffe and poll.

Nevertheless, given the choice between Romney and Newt, I’d rather have the latter on the ballot a year from now. Newt’s baggage is so well-known it doesn’t really matter anymore: by all accounts, he’s a creep with a history of philandering (although Bill Clinton has largely inoculated him from that onetime disqualifier) and close ties with sleazy lobbyists. Slipping into past campaign parlance, it’s doubtful that Newt would be any reasonable person’s choice to share a beer with. If he didn’t bore you silly with an arcane monologue about Andrew Jackson’s first term in the early 19th century, at some point it wouldn’t be out of character for the onetime Congressman to call you an asshole.

So what. As the economy slips and slides in the United States, often dependent on what happens in Western Europe, and the unemployment rate barely budges from nine percent, does the country require a cool dude—like Obama—to call the shots? Several weeks ago, in Mother Jones, David Corn wrote a story cataloging instances of Newt’s nastiness, headlined “Can Newt Be the First Openly Mean President”? and I just shrugged. As a trend, Mean might not be the new Nice (although the OWS characters are veering into that territory), but in electing a president, in 2012, I don’t think it matters one iota.