On the Bill Maher/Elisabeth Hasselbeck feud. 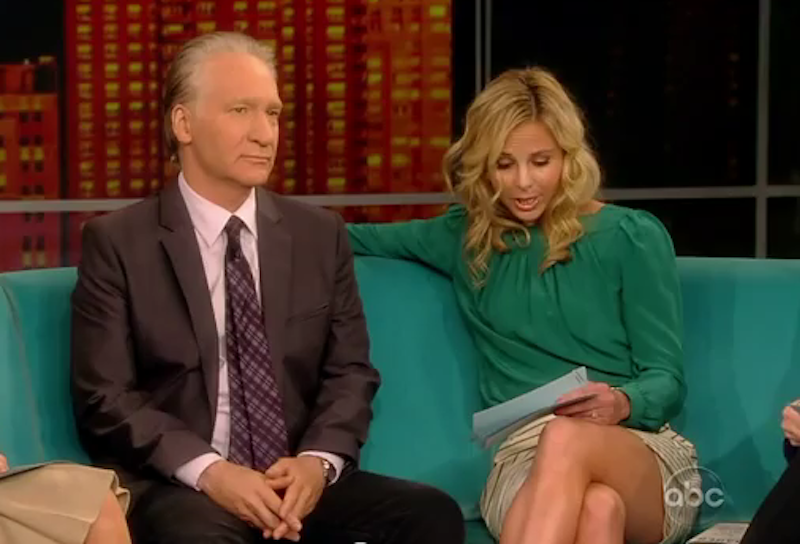 This week’s best piece of video is a rare gem from The View: dorm-room realist and playboy/escort aficionado Bill Maher fending off Elisabeth Hasselbeck’s attempted death by a thousand nips. Liz is a little butt-hurt from a joke Maher made back in February—that we should negotiate with Libya and trade the then-captive Lara Logan for Hasselbeck. Most sensible people would applaud that one, but of course when Maher was on the show Monday, Hasselbeck couldn’t help but dig up old bones. “I want to go back to a time that bothered me, not just for my own personal reasons, but for women.” Okay, no. You are parodying yourself better than anyone else could. “Forgive this idiotic Republican for bringing this to your brilliant mind…” Well you certainly sound butt-hurt. Who exactly gave a shit about this joke besides you?

It’s like in high school philosophy classes when the Christian girl gets all bent out of shape and takes everything as a personal attack. Hasselbeck is so worked up here that she can’t go two moments without snipping at Maher’s heel, cramming in every meanie-pants crack she can. “I don’t think I’m wrong in saying, hmm, that wasn’t that funny." "I’m not personally hurt, I’m just trying to speak out for women here, we don’t trade women in this country.” Guh? Why am I the last to know? Seriously, this kind of emotional, irrational, and indignant self-righteousness is really repugnant – as Maher snaps back at one point, “I feel like I’m in high school sitting next to you.” Maher does sound like he’s channeling a horny stoned teenager sometimes, but on the whole he’s a realistic and pragmatic libertarian, who isn’t gun-shy like most pundits on the left (to his credit, Real Time makes The Daily Show look sanitized).

Yet, from reading the comments on Jezebel, you’d think this was a battle in the mud between two of our worst public figures: Hasselbeck, an untamed shrew, and Maher, a raging misogynist chauvinist scumbag who has nothing but contempt for the ladies. Obviously Jezebel caters to those looking for opportunities to be offended and cry afoul, but it’s not any more of a rational or productive mentality than the pseudo-objective jib-jab most of our broadcasters spew. This clip from one of Maher’s standup specials where he laments the “over-feminization” of our world, and pretty much everything he says is right. You can’t show a woman who’s dumber than a man on TV and make jokes at her expense. Yet every Doritos commercial stars bumbling husbands stuck in middle school, and the women just roll their eyes. I’m certainly not offended as a man, I’m offended as a consumer of media. This stuff is L-A-Z-Y.

The Jezebels may not like that he fucks super models, has never married, and pays for probably half the sex he has, but Bill Maher is one of the last sane people standing in a media world full of vapid characters who think they’re anything but. His show is a perfect example of quality infotainment and how it can work: the heady discussions on healthcare, collective bargaining, tax reform, etc. are sandwiched between jokes about Marcus Bachmann’s secret underpants and how the Olsen twins look like raccoons. Point being: he doesn’t take everything so goddamned seriously, or at face value. I don’t think it’s too much to ask that we have smart, incisive pundits who know what they’re talking about, aren’t gun-shy or painfully unfunny, and won’t throw a hissy-fit every time someone calls them a name.