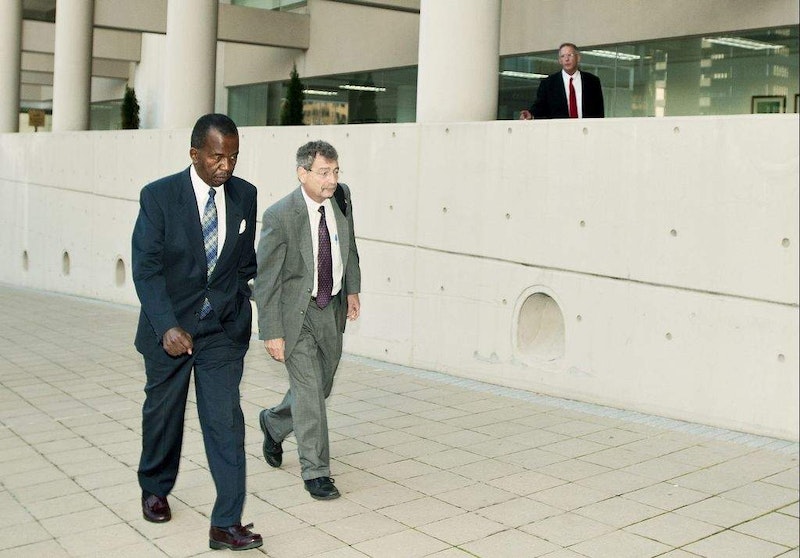 This is a case history of the abuse of power in three different dimensions, kind of like the three blind mice. They are the men who’ve dominated the news nationally and locally—the hands-on presidential candidate Herman Cain, the hands-off football coach Joe Paterno and Ulysses S. Currie, the Maryland senator who got caught with his fingers in the tambourine but who beat the rap. In each case, it was not so much the deed itself but the cover-up that followed.

Begin with Cain. Cain is either a liar or a darn good actor. But above all, he’s the candidate conservatives love because he denies his blackness and knows his place. During the latest Republican debate, the audience actually booed the panelists when they questioned Cain about alleged charges of sexual harassment, in the most public case of the power of men over women who are seeking employment. The allegations have now been advanced by four different women and one man who witnessed the harassment, all independently of each other, including two women who were paid large sums of hush money by the National Restaurant Association which Cain headed in the 1990s. The evidence is piling up beyond Cain’s redemption except in the eyes of the Tea Party. After two weeks of changing his story and his mind almost daily, if not hourly, by attempting to air-brush the charges, Cain now steadfastly denies the stories as “baseless, bogus and false.” At the debate, he deflected the question with his campaign’s leitmotif, the Rube Goldberg economic plan he calls 9-9-9, which most economists dismiss as simplistic, unworkable and overly beneficial to the rich. Attorneys are now working to assemble the four women at a single news conference to weave their stories of Cain’s aggressive sexual behavior into a single narrative of abuse.

The larger question about the Cain imbroglio is this: What is there about certain conservative black men and luminous white blondes? So far, the two women who’ve been identified, one by choice and the other by the steady drip of leaks, are visibly, almost Nordically, Caucasian, perhaps with the help of their hairdressers. It’ll be interesting to discover if the remaining two also resemble Virginia Thomas, wife of Supreme Court Justice Clarence Thomas. Cain compounded his habit of misogyny with his condescending reference to House Minority Leader Nancy Pelosi as “Princess Nancy.” Virtually every analyst who reads polls and appears on cable news agrees that Cain has no chance whatsoever of winning the GOP nomination. They argue that he is in the race to sell books and line up motivational speaking engagements. Whatever the case, the conservative dollars continue rolling in and as long as Cain keeps collecting funds he’ll remain in the contest no matter what the odds. On another point where everyone agrees, Cain’s reaction to the charges—he had 10 days to prepare an explanation—is the classic example of how not to handle damage control. The way to proceed is, get out the truth and get it out fast. Cain has now hired a defamation lawyer to monitor the discussion, mere obfuscation and another cover-up.

The great sports writer Grantland Rice observed, “The only difference between the political arena and the locker room is the smell of wintergreen.” Joe Paterno is guilty of another kind of public relations blunder. He knew about a dirty little secret within the tight world of collegiate football and did nothing about it. Paterno, like Cain, is guilty of a cover-up. And so is Penn State University, his former employer. One of his Penn State coaching associates was molesting boys, as many as nine over a 10-year period, and no doubt still counting. In fact, Paterno’s assistant, Jerry Sandusky, had formed the Second Mile Foundation, kind of a sports camp for kids, as a way of enticing star-struck young boys into his sexual snare. The foundation was nothing more than a pubescent meat market. And now comes a report that Sandusky allegedly used the foundation for “pimping out young boys to rich donors.”

The foundation, a so-called charity, is now under investigation. Now for the outrageously criminal stuff: According to a grand jury report, Sandusky was seen naked in the shower raping and having anal intercourse with a 10-year-old boy who was pinned against a wall with his arms outstretched over his head. And in another case, Sandusky was found performing oral sex on another young boy. The 84-year-old Paterno was told of this but kept it to himself. He now claims he told his boss but not the police, contributing to his public display of remorse and guilt. Football at Penn State, after all, is an annual $80 million business. Paterno was fired as coach, along with Pennsylvania State University President Graham Spanier and two other administrators, but the students rallied to Paterno’s defense the way students usually do, by rioting, turning over a TV news van and tearing down light poles. Sandusky has been indicted. The cover-up in Happy Valley, at Penn State, has been likened to the Catholic Church, of which Paterno is a member, for brushing over the sexual abuse of young boys. And the whole sorry episode is likely to cast a gloomy eye on sports programs across the country. The safety and the future of young boys are more important than being the winningest coach in football history. Paterno, at 84, like most athletes and politicians, had a tough time letting go of yesterday.

Stupid may be a cover-up but it’s a winning defense. Sen. Ulysses S. Currie (D-Prince George’s) is not the first Maryland politician to claim stupidity as an excuse for wrongdoing. That distinction belongs to A. Gordon Boone, speaker of the Maryland House of Delegates, who was indicted in 1963 in the state’s first savings and loan scandal (as separate from the second collapse in the mid-1980s.) Boone pleaded stupid but not guilty and was convicted and sent to jail; Currie argued stupid but not guilty and beat the rap. Having escaped conviction by a jury, Currie must now face the judgment of his peers, the legislative ethics committee and a likely mild rebuke to get themselves off the hook in the chummy environment of the State House. As every political rubbernecker knows, Currie was indicted on charges of a bribery scheme for accepting $255,000 in consulting fees from a chain of food stores along with two former executives of Shoppers Food Warehouse. He neglected to report the fees on the required financial disclosure forms although he paid federal taxes on the money. His public defender lawyers, paid with tax dollars, paraded a cohort of witnesses that included two members of Congress, a former governor, ranking members of the legislature and Currie’s personal lawyer, who all testified that Currie is a nice guy, very courtly, but stupid, sloppy, disorganized, unable to grasp details, but mainly just plain dumb.

According to testimony, Currie’s as thick as a tree trunk and doesn’t have a measurable IQ. What’s more, it was said that he was taking powerful medication for prostate cancer that dulled and clouded his mind. Okay. If that’s case, then why in the hell was he chairman of the all-powerful Senate Budget and Taxation Committee which oversees the fine print of Maryland’s $32 billion budget? The answer: Currie’s a friend of Senate President Thomas V. Mike Miller (D-Calvert) and loyalty trumps ability. That is the pivot on which the case turned, not so much on Currie’s alleged IQ, or lack thereof, but in the inability of federal prosecutors—despite the reputation of U.S. Attorney Rod J. Rosenstein for meticulous preparation—to understand and penetrate the clubhouse culture of the General Assembly. Where else would an elected official sit through a six-week trial listening to his colleagues describe him as the dumbest oaf among its 188 members? Certainly not while he’s presiding over a committee hearing with billions at stake or when he’s asking a bureaucrat whose budget he oversees for access roads or traffic lights or a liquor license transfer or even a $2 million state grant for a consulting client from whom he’s collecting thousands in fees. Then, he’s one shrewd brother-legislator and a powerful go-along, get-along guy. We also now have a clue as to why many of today’s kids can’t read: Currie’s a former school principal and teacher.