The Republicans go for another round in Detroit, and the Curse of Mitt destroys a rival. 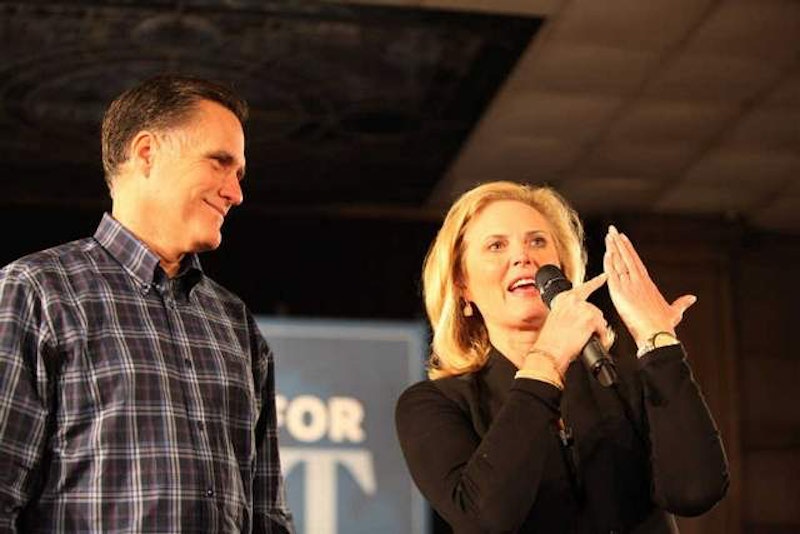 Mitt Romney and Jon Huntsman look like worldly, elite-level gentlemen from long before t-shirts had messages on them. Normally you don’t notice somebody’s temples. But the Republicans’ two sort-of-possible presidents come equipped with special hairline paneling that commands the eye. You have to look at the silver.

At Wednesday’s debate in Detroit, Romney looked like the president of a big bank on Wall Street. Huntsman was the gifted undersecretary of state who’s being blackmailed for homosexuality. Maybe he was the bank president’s younger brother. The bank president had Dan Rather’s gift for being a big, authoritative man with nerves of jelly. The younger brother came on very keen and challenging, but flinched away from saying outright that the thought the bank president was bringing on a trade war.

Huntsman saw what happened to the last person who challenged Romney. Just 20 minutes before Huntsman’s jab about trade pandering, Rick Perry had detonated himself. The governor of Texas produced a blowout of a self-lit fart that flared for almost a minute before proceedings could resume. In the previous debate Perry had gone at Romney and made the frontrunner talk nervous and jabbery. This time all that aggression doubled back on the governor, and the results transfixed a nation of cable and YouTube viewers. Perry suffered a brain melt that left him unable to name all three federal agencies he wanted to kill.

He acted like it was a big joke, and so did everybody else on stage. But Romney’s vengeance had taken him. No one challenges that fragile, jittery man without getting slapped by the fates. Tim Pawlenty lofted “Obamneycare,” then whiffed when he had to say it to Romney’s face, and left the race. Perry simply took off his own head. So Huntsman feinted but drew back, petulant.

Overall, Romney did all right in Detroit. He didn’t prevail, necessarily. It was more like everyone left him alone and he could get on with being leader-like. Herman Cain scored the biggest non-fiasco moment, when the crowd applauded him to spite the media and its harassment storyline. Otherwise it was a quiet evening, with much less of the pep seen last time out.

Maybe the squad was abashed, given that the debate’s topic was the economy and they faced a table of financial reporters being serious. First-naming was scarce compared with Las Vegas, where Cain’s 9-9-9 plan had come in for a great deal of avuncular pummeling. (“Herman, I love you, brother, but let me tell you something,” Perry said back then, suave). This time around the chumminess had dried out of the atmosphere. “To pick up on something Congresswoman Bachmann said,” a crisp Newt Gingrich announced before launching into Dodd-Frank repeal.

The Perry disaster. It’s like he had to take a dive. Perry held back from attacking Romney, then humiliated himself. The poor sap supplied a piece of video that’s like inside-out pornography. It’s so embarrassing that it should be blackmail material, but it’s entirely public. “Oops.”

Do politicians get leaned on and throw matches? Do they submit, broken, then screw themselves up inside and cough out absurd, career-destroying gaffes because they don’t know what else to do? Maybe. Half a continent away, Karl Rove taps his iPhone, scans the news of the fateful 53 seconds. He turns back to his dinner companion. “Went a bit overboard,” Rove murmurs; his smile is reflective. “Guess he wasn’t equipped for a graceful landing. Not everyone has the equipment.”

Or possibly Perry is so dim that he suffered a simple case of overload. He always had Energy and Education on his list; this time he tried for three, threw in a newcomer. “Sources at the Perry campaign say they do not believe that the Texas governor has ever mentioned all three departments in one breath and that his decision to mention Commerce Wednesday night was new,” says ABC’s “The Note.” Three were too many for him; he remembered Commerce but forgot Energy.

You can see what led Perry to his doom. Ron Paul has five federal agencies or departments that he’d like to kill. Paul makes a point of the number, calls it out. At Detroit he waved his hand with the five fingers splayed, as if a plane were taking off and the people inside had to see the number of departments on his list. Peggy Noonan, writing about the debates, said viewers are “shopping for a new president, and TV is an easy way to judge the merchandise.” Paul’s big five is a selling advantage, a feature he can point to.

Naturally, Perry might want to beef up himself to three, maybe go higher. What’s hard to believe is that this would be such a challenge. If it is, the poor man is not fit to compete. He’s just an evolutionary byway, and he’s dying by the watering hole.

Rick Perry jokes. How many fingers does Rick Perry have? Two-plus. Rick Perry describes the Holy Trinity: “Jesus and that other guy.” Rick Perry as band leader: “One for the money, two for the show, three to… the Energy Department!” What Rick Perry wishes he had said: “Let me tell you some agencies that I’d keep. The Department of Defense, the Washington Monument, Reagan Airport, and maybe two others.”

Unasked follow-up. What if someone had asked Perry why he wanted to abolish Commerce, Education, and oh yeah, Energy? You’d think that would be a cruncher, since his list appears to have been taught him by campaign staff. But he could segue his way out of it, pivot from the immediate to the vastly abstract. “If we want dynamism in our classrooms, we have to remember that Washington is no place to be picking winners and losers.” Or: “If we want dynamism in our energy markets, we have to remember that Washington,” and so on.

A party as ideological as the current GOP makes that move easier and easier. The move should really count as a leap, not a pivot, but everyone in the audience is agreed on such big things, in such detail, that a candidate can take a particular issue and simply wave it within view of the ideas overhead. He doesn’t even have to plug it into the machinery. The gesture will do, and the rest happens by magic.

Herman Cain gets through life like that. To him, asking about the Italian bond crisis is just an indirect way of asking whether the engine of America’s economy (the business sector) should be filled with gasoline. Without dodges of this sort his public career would be impossible.