Telling White Populists What They Want to Hear

While there may be racial progress, it still doesn't trump ideology. 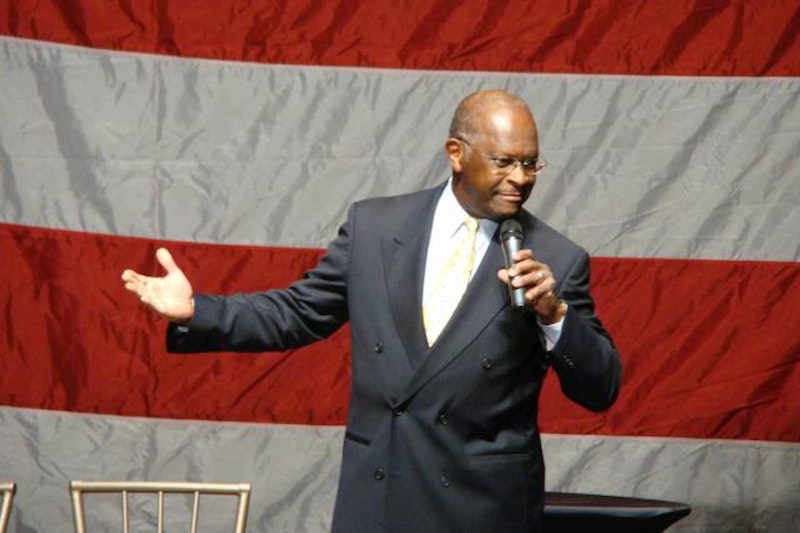 It's a truism on the loony talk-radio right that discrimination against black people ended when we freed the slaves, and that the only real racism left is the prejudice liberals feel towards white people. Ross Douthat, however, is not a member of the loony talk-radio right. He's a kinder, gentler conservative, and his downplaying of racism in his Wednesday New York Times column is, ergo, kinder and gentler and less viscerally idiotic. Writing on Herman Cain's implosion and talk radio's refusal to recognize it, he muses:

We should remember this moment, because it’s a perfect encapsulation of how race’s role in American politics has changed over the last 75 years. We are nowhere near the post-racial moment that Barack Obama’s election was supposed to usher in; instead, we seem more obsessed with race than ever, and more attuned to identity politics in all its permutations. But Herman Cain’s candidacy has confirmed what the experience of the Obama era has already suggested: In national politics, race matters, but ideology matters much, much more […..]

It's a deft formulation. On the one hand, Douthat manages not to sound like an ideologue by even-handedly blaming both sides for misusing accusations of racism. On the other, he quietly affirms the central tenets of the loony talk-radio viewpoint. Race, for Douthat, is no longer an issue—or at least, not a real issue—in American politics. Both sides use race as a bludgeon for ideological reasons, but that just demonstrates the extent to which race is not in fact the salient factor. After all, Douthat argues, if the Republican Party was really racist, would they defend Herman Cain from accusations that he sexually harassed white women?

There's no doubt that racism in this country has in many ways improved over the past decades, and even over the past years. Part of that is due to… the election of Barack Obama. Herman Cain probably wouldn't admit it, but his candidacy has surely been helped by the fact that it's a lot easier to imagine a black man winning the presidency now than it was four years ago. Moreover, with a black man leading the opposition party, the Republicans' querulous insistence that they're no more racist than the next guy rings a little hollow. The GOP has a major incentive to show itself to be diverse, too. They want to act less racist… and acting less racist is a big first step towards being less racist.

So I'd agree that Cain's candidacy, like Obama's before him, has been important. But I think Douthat is overly sanguine in arguing that it shows that racism has become definitively less important than conservative ideology. First, the real issue here is not racism taking a back seat to conservatism as racism taking a back seat to sexism. Talk radio will, apparently, sneer at women who have been sexually harassed regardless of the skin color of their harasser.

Even without the counterbalancing force of male supremacy, though, white supremacy has always been happy to take ideology into account. In the early 90s, Republicans were happy to support crack cocaine laws that imprisoned black men in staggeringly disproportionate numbers while fighting to put one particular black man named Clarence Thomas at the top of the justice system. Going a bit further back, Booker T. Washington received a fair amount of money and support from white donors who probably would have (literally) grabbed a shotgun if you'd suggested that Washington's students should marry their daughters. And, of course, neo-Confederate assholes love to tell (almost entirely fictional) tales about black soldiers fighting for the Confederacy. That doesn't show that Confederate ideology trumps racism. It shows, on the contrary, that tactical exceptions can be used to strengthen racist ideology.

The GOP is not today a party built on racism the way the Democrats once were. But neither are they a party based on anti-racism, the way the Republicans once were. What the GOP is, instead, is a party that, perhaps less than previously, but still with depressing consistency, flirts with racially-tinged white populism. The vicious rhetoric around immigration; the paranoid conviction that a black man with a weird name can't possibly have been born in this country; the lambasting of a New York mosque—none of that happened 100 years ago, or 50 years ago, or 20 years ago. And just because some of the people who supported those other things also support Herman Cain doesn't make their support for those other things any less racist. Especially when a certain amount of the appeal of Cain's candidacy appears to be the enthusiasm with which he grants absolution to those accused of racism, while denouncing as "brainwashed" the large number of people of color who find Republican racist nonsense uncongenial.

It's that sort of rhetoric from Cain which led Ta-Nehisi Coates to suggest that the candidate had embraced the unpleasant political tradition known as "telling white populists what they like to hear." Once upon a time, telling white populists what they wanted to hear was a way for a black person to keep from getting shot. For Cain, it's been a way to almost possibly convince some that he might have a chance at the presidency. That's definitely progress. I don't know that either the talk-radio loons or the NYT moderates in the Republican Party need to spend too much time patting themselves on the back about it, though.