Call off the GOP Primaries: Pundits Have Already Nominated Romney

The pack mentality of American political journalists gets worse, if that’s imaginable, with each presidential election. 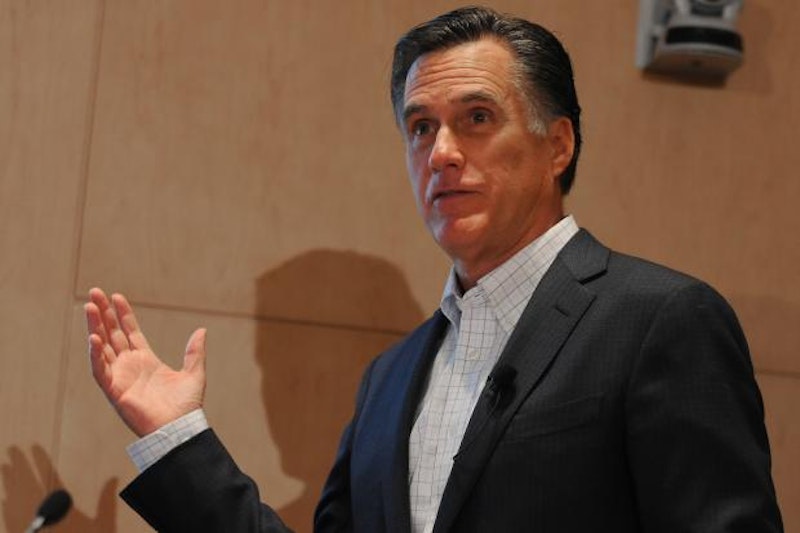 Ross Douthat, in his weekly New York Times op-ed column last Sunday, inadvertently provided readers with a valuable primer on today’s political culture. Going out on a limb, Douthat—paired with Times colleague David Brooks as the paper’s putative conservatives—advised his audience to tune out the words of pundits, frenetic or staid, in the coming months because no matter what they say on any given day, Mitt Romney will be the GOP’s presidential nominee. He writes: “Please do not listen to any of them. Ignore the Politico daily briefings, the Rasmussen tracking polls, the angst from conservative activists over Romney’s past deviations and present-day dishonesties. Please ignore me as well, should campaign fever inspire a column about the Santorum surge or the Huntsman scenario.”

I did like the jab at Politico—the once-jazzy and jump-start popular website that was obligatory reading in 2008 for the political class—as it’s apparent that venue has lost its juice. And, better yet, Douthat, by telling readers to “ignore” him as well, might have run himself out of a job, if his editors think about all the space they waste on day-in, day-out, thumb-sucking about a presidential election that’s still a year away. I haven’t the Nostradamus vision of a luminary such as Douthat—four years ago, John McCain’s campaign was broke and written off, Hillary Clinton had the Democratic nomination sealed up, so weird things happen on the way to New Hampshire and South Carolina—but in catching up with Times and Wall Street Journal columnists this past weekend, I can say with near-certainty: none of them know nothin’ about nothin’.

First, sticking with Douthat: He concludes, “What [Republicans] have to offer… is a largely opportunistic critique of a flailing liberal president. So it’s fitting that America’s most opportunistic politician is destined to be the standard-bearer for their cause.” I think Douthat is saying that Obama will prevail next November. And that’s because the GOP hasn’t recovered from “the Bush era’s serial disaster” and the Tea Party’s “mix of zeal and naïveté” and as a result the dull/dull/dull Romney, with all his flip-flop baggage, isn’t likely to drive Republicans and independents to the polls, not even in a “hold my nose and vote” sort of way. Never mind that the loose amalgamation known as the Tea Party was largely responsible for the Democratic mid-term disaster a year ago. Also, Douthat doesn’t mention the current 9.1 unemployment rate, unlikely to improve much in the next year, which could easily propel Romney (or Perry/surprise nominee) to victory over Obama.

Even less edifying was Pete Du Pont’s Wall Street Journal contribution on Oct. 21, an exercise in wishful thinking that was headlined “No More Years.” Du Pont, the septuagenarian scion of the famous Delaware family, and onetime governor of that state, points to a slew of polls showing that a “generic” Republican candidate would defeat Obama handily, as well as more ominous data for the President about America’s mood about the “right/wrong” direction. That’s swell for Republicans who need a pep talk, but Du Pont doesn’t even speculate as to who his Party’s candidate might be: “generic” candidates, at this point in the presidential cycle, usually fare better than flesh & blood men and women.

I was reared to respect my elders, at least those who deserve it, but Du Pont’s column reads like a press release from a conservative think tank or Republican National Committee list of talking points to young volunteers. Take a look at the following and tell me with a straight face it’s not delusional:

Simply put, if Republicans win they will reduce federal spending—hopefully back to where it was as a percentage of GDP in the 15 years before 2009. One may also hope they will balance the budget and scale back the intrusiveness of the federal government… Add in the repeal of ObamaCare, and we would move away from government intrusion and regulation of health care, allowing us to make the changes necessary to give people more individual choices, give Medicare enrollees more flexibility and choice, and provide more flexibility to our states in handling Medicaid. We need to reform the tax code too—reduce the deductions and credits and put in place lower tax rates for everyone, which will help get the economy going forward again.

Notice the word “hope” in Du Pont’s wish list. Yes, I hope that what he outlined would come to pass in the event a Republican wins the presidency; I also hope my two sons become fabulously wealthy by the time they’re 23 and set up my wife and me in a splendid waterfront home on the coast of Georgia. And while I’m on Du Pont’s wavelength, I hope as well to wake up one morning and suddenly possess a left arm that can throw 100 mph, leading new Red Sox general manager Ben Cherington to tap me as the most phenomenal 56-year-old superstar in the history of baseball.

Peggy Noonan, writing in the Journal on Oct. 22, takes a different tack to explain the inevitability of Romney’s nomination. Now, she cautions that he’ll have to “work for it,” because “that’s what Republicans do,” but stolid Mitt will persevere in the end and take on Obama. Why? Well, according to Noonan, Romney reminds voters of long-ago sitcom fathers like Robert Young in Father Knows Best and Fred MacMurray in My Three Sons. Presumably, Noonan left out Ricky Ricardo since he was Cuban and he and Lucy just had one kid, often shuttled off to the care of Mrs. Trumbull or Ethel and Fred. That’s a little too modern and ethnic, I suppose.

The series of GOP debates have captivated Noonan (which makes her probably an audience of one) and she points to the ratings they’ve received. One of them on CNN drew 5.5 million viewers; another on Fox brought home 6.1 million of “politically engaged” citizens. Maybe that’s a big score for the stations; I’m not really certain since all ratings seem a little suspicious to me.

But let’s get to the red meat of Noonan’s happy-talk column: “A big Romney virtue is the calm at his core. The word unflappable has been used, correctly, and puts him in contrast to the incumbent, who often seems not so much calm as insensate… What America has right now is a bright, lost older brother. It misses Dad.”

You’re not alone if you puked at the idea of Romney being “Dad,” a characterization that does grave injustice to the millions of fathers across the country. Besides, when was the last time a U.S. president resembled “Dad”? Maybe the first Bush, I guess, but he was kind of wishy-washy just like Romney, changing his mind, writing notes to foreign leaders and ticking off conservatives by breaking his word on taxes. So no, he wasn’t fatherly, nor was Clinton or Reagan (grandfatherly) or LBJ or JFK. Jimmy Carter was more like an annoying neighbor who keeps threatening to call the zoning board if your lawn isn’t trimmed perfectly, and Nixon, well, he was really more of a Hollywood creation who, aside from his paranoia and illegal activities, messed up the economy and governed like a liberal.

Swinging back to the Times, David Brooks is a Romney fan as well, mostly because he’s “dull.” He wrote at the beginning of the month: “Romney is the most predictable of the candidates and would make for the most soporific of presidents. That’s a good thing [I thought Martha Stewart clichés became verboten once she landed, unfairly, in the pokey]. Government would function better if partisan passions were on a lower flame.” This makes no sense. Romney is predictable only in the sense that he’ll change his mind—on health care, abortion, gay rights, his favorite brand of cereal—when it suits him politically. I don’t trust a word he says, not because I believe he’s malevolent, but rather because his flip-flopping spells real trouble in dealing with Congress should he be elected.

To recap: Ross Douthat says Romney has the nomination wrapped up, so don’t read pundits who say otherwise, including him. Pete DuPont is already celebrating a GOP restoration without naming who the leader of the Party will be. Peggy Noonan claims that your “Dad,” Romney, is just what the country needs. And Brooks, maybe because he wants less partisanship in government so he won’t have to raise his voice at cocktail parties in Georgetown, is sure that Romney will calm the country down because he’s so “predictable.”

I’m lost. Maybe Romney wins it all, maybe Obama has a comeback and maybe there’s a presidential surprise coming up, I don’t know. So let’s revisit these four columnists in mid-January and chart their new certitudes. I’ve got 100 bucks that says their opinions won’t match those of this October.