Rick Perry's No Ronald Reagan, Until He Is

Entrenched Republicans, fearful of their status in Beltway circles, are rallying against Rick Perry in favor of Mitt Romney. That’s one indication that Perry will be the GOP nominee. 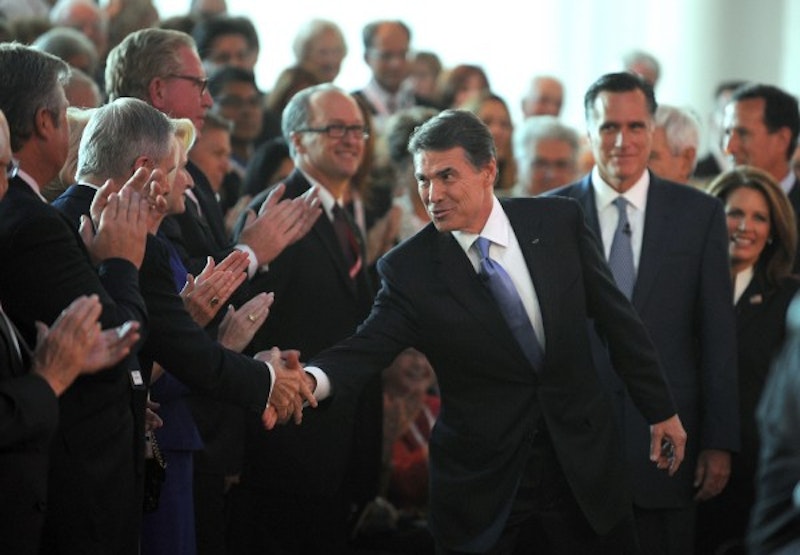 It’s a rare morning that I let out a belly laugh upon reading The New York Times, but a Sept. 13 story about “establishment” Republicans who are nervous over Texas Gov. Rick Perry’s ascendancy in most public opinion polls was delightfully rich. No knock against reporters Jeff Zeleny and Michael D. Shear, I suppose, since the pair was just repeating a familiar mantra in Washington these days, and took the opportunity of the Sept. 12 GOP debate to hammer the message home.

The “nut” of the story was that failed (already!) presidential candidate Tim Pawlenty has endorsed onetime competitor Mitt Romney, the man he very recently mocked as a supporter of “Obamneycare.” Now, Pawlenty, obviously angling for the veep slot should Romney prevail—I think that’s unlikely; any candidate who trots out the hoary joke, as Romney did last week, about Al Gore “inventing the Internet” is devoid of imagination—praises the former Massachusetts governor as a man with “unique qualifications” to confront the continuing economic doldrums. Perry snagged a more vital endorsement, in my view, with Louisiana Gov. Bobby Jindal (who, in contrast to Pawlenty, probably isn’t trolling for the number two spot; that would seem to be reserved for Sen. Marco Rubio or Gov. Chris Christie), who lavished praise on his neighboring governor for the job creation in Texas.

Naturally, former Rep. Vin Weber, who must be 100 years old by now—or maybe it just appears that way since he’s the lazy reporter’s “go-to” guy for an anodyne quote—echoed the sentiments of the Beltway’s entrenched Republicans, who fear that Perry is too scary to appeal to independent and moderate voters, what with all his “Ponzi scheme” talk about Social Security. Perry made it clear in the Sept. 12 debate that “seniors,” perhaps the slice of the electorate that’s most pandered to, can rest easy; their Social Security will remain intact. Instead, he’s talking freely about reforming the entitlement program, appealing to younger voters who, if present conditions prevail, will likely not receive a penny later on in life, despite contributing to the fund presently.

That Ronald Reagan, in the spring of 1980, was similarly thought to be frightening is not a new observation, but considering the canonization of the 40th president, it deserves more attention. In April of 1980, I was 24 and editor/proprietor of Baltimore’s weekly City Paper, and our staff of writers reckoned the notion of Reagan as president was so far-fetched that we organized a carnival one day, “The Ronald Reagan Laugh Fest,” that attracted some 500 Baltimoreans. We featured continuous loops of Reagan’s lousy movies, a pin-the-tail-on-Reagan game for kids, water balloon fights, sold “Laugh Fest” t-shirts, and had several impersonators of the former California governor give it a go at the microphone. It was a lot of fun, and we netted over $1000, the proceeds of which were spent at a Little Italy restaurant and then a wee-hours tour of West Baltimore in search of ribs at Leon’s Pig Pen, a fabulous local bbq chain at the time.

Personally, I was agnostic on that election, disgusted with Jimmy Carter, but unable to make the leap to Reagan yet (that would come after he kayoed the Air Controllers); in fact, on Election Day in ’80 I affected a “whatever” (a word not yet in vogue, thanks) attitude and didn’t vote. Like most people, I anticipated a close election, and got home from work to prepare a large sausage and beef casserole for myself and a few friends, with plenty of cheap white jug wine, and was knocked off kilter when Reagan’s landslide was called at about 7:30 that night.

Might Rick Perry, should he win the GOP nomination and defeat President Obama, take on the strong leadership qualities of Reagan is a question that can’t be answered today. But to dismiss a charismatic candidate like Perry so quickly, particularly in favor of the Michael Dukakis-like Romney, is short-sighted. You just never know how a man (and one day, perhaps, a woman) will take to the Oval Office: after all, even JFK was regarded by half the country as a lightweight in 1960. It took a few gutsy decisions, and reactions to failures, to put some meat on his presidential bones.