Do you prefer the torture of previous regimes or Ron Paul's racism? 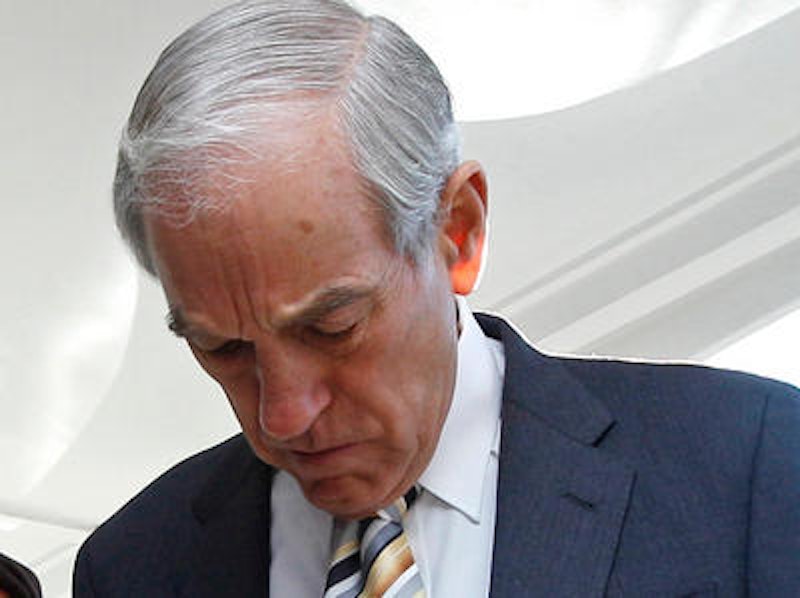 Several decades ago, Ron Paul published countless racist newsletters under his own name. I haven't read many of them because reading paranoid racist crap depresses me, but Ta-Nehisi Coates published enough excerpts to give you a flavor.

Given the inefficiencies of what DC laughingly calls the criminal justice system, I think we can safely assume that 95 percent of the black males in that city are semi-criminal or entirely criminal.

If you have ever been robbed by a black teenaged male, you know how unbelievably fleet of foot they can be.

Coates points out that, far from disavowing this nonsense, Paul has often doubled-down when confronted, claiming at one point that, "If someone challenges your character and takes the interpretation of the NAACP as proof of a man's character, what kind of a world do you live in?"

Paul has stated numerous times that he didn't write his newsletters and didn't even read them. This is, as Coates and others have pointed out, not sufficient. He earned money from the newsletters and promoted them personally. At the very least, he should have kept tabs on whether they were spewing racial hate speak. Failing that, he now needs, as Michael Tomasky argues, to do some fairly abject explaining. To my mind, that explaining should, ideally, explain and repudiate the long and unpleasant connection between libertarianism and racism—a history that goes back at least to the Civil War era cloaking of racism in the fig leaf of states' rights. Paul needs, in other words, to take responsibility not just personally, but ideologically for those newsletters; to explain why libertarianism has been complicit with racism in the past, and how it can cease being complicit in the future. He must not only apologize, but also show that he's learned from his errors not just as a man, but as a public leader.

Paul shows no signs of being willing to grapple with race in such a manner. Pressed on the issue during a recent CNN interview, he walked off the set rather than answer.

Not surprisingly, Paul's intransigence and, yes, cowardice, has started to alienate supporters. Andrew Sullivan, who had endorsed Paul on his blog, reconsidered.

It seems to me that even though I don't believe these old screeds reflect Paul's own beliefs, his new level of prominence demands a new level of accountability, even on issues this old. If Paul did not write these newsletters, then he has an obligation to say if he knew who did, or conduct an investigation. He has had years to do this, and hasn't. And here's what you've persuaded me of in the last few days: a person who has that kind of bigotry directly printed under his name without a clear empirical explanation of why he is innocent cannot be an honorable president of the United States. The hatred of groups of people in those letters—however gussied up by shards of legitimate arguments—is too deep and vile to be attached to a leader of the entire country. It is far too divisive. The appearance of things matters; and until Paul explains why this appears so horrible, he cannot shrug off the burden of proof.

A week or so back I said that I might be open to voting for Paul, certainly in the Republican primary, possibly even in the general election against Obama. So, have I changed my mind? Do I agree with Sullivan that Paul's newsletters are "too deep and too vile to be attached to a leader of the entire country"?

No, not really. I'd still consider voting for Paul.

That's not because I don't take the newsletters or racism seriously. The bits of the newsletters I've seen are vile. I think (contra Sullivan) that there's good reason to think that Paul harbors, or has harbored unpleasant racist sentiments. As I said above, libertarianism has some pretty unpleasant byways. The newsletters suggest that Paul has wandered down several of them.

So it's not really that I disagree with Sullivan's assessment, or with Coates' in terms of Ron Paul's character. It's that I don't think Paul's severe, disgusting character flaws disqualify him from the presidency. And the reason is that, as near as I can tell, everyone he's running against has character flaws that I find at least as troubling.

To put things in perspective: George W. Bush lied in order to start an unprovoked and unnecessary war that killed more than
a hundred thousand civilians.  He also condoned the use of torture, with the result that a handful of people in U.S. custody were tortured to death. That makes Bush a war criminal; he should now be in jail. Our current President—whom I quite like in many ways—has refused to prosecute the war crimes of his predecessor. Under international law that makes him a war criminal as well, and he should also be in jail. Moreover, he has prosecuted a war in Afghanistan that has resulted in numerous civilian deaths in the name of it's-really-unclear-what.  (Here's a cheerful story a little girl with massive burns caused by our drone strikes, for  example.)

The Republican nominees for president are not as of yet war criminals to my knowledge, but that's only because they haven't gotten the chance.  Mitt Romney  has been eagerly, nauseatingly pro-torture. Newt Gingrich wants a war with Iran.  Bachmann, Santorum, Perry et. al. aren't much different. Vile as I find Paul's newsletters, I find the embrace of torture and perpetual imperial war even more disturbing. If I have to choose between rhetoric advocating racism and rhetoric advocating imperial mass murder, I will very reluctantly choose the racism—not least because the rhetoric advocating imperial mass murder is in itself more than a little racist.

Ta-Nehisi Coates at the end of the piece says this:

The kind of racism which Paul trafficked is neither innovative nor original. Even his denials recall the obfuscations of Jefferson Davis and Alexander Stephens. But some pity should be reserved for the young and disgruntled, for those who dimly perceive that something is wrong in this country, for those who are earnestly appalled by the madness of our criminal justice policy, for those who have watched a steady erosion of our civil liberties, and have seen their concerns met with an appalling silence on the national stage. That their champion should be, virtually by default, a man of mixed motives and selective courage, is sad.

I don't quibble with that. But the situation is what the situation is. Currently, the main ways that our country implements racism is through the drug war at home and through imperial paranoia abroad. The only presidential candidate in my lifetime who has been willing to unequivocally oppose both is Ron Paul. I wish that I did not have to choose between personal racist nonsense and institutional racist policies. But as that is my choice, I am not ready to state categorically that I prefer the war criminals and the torturers to the racist.