Gingrich is down for the same reason he used to be up: Republicans watch too much TV. 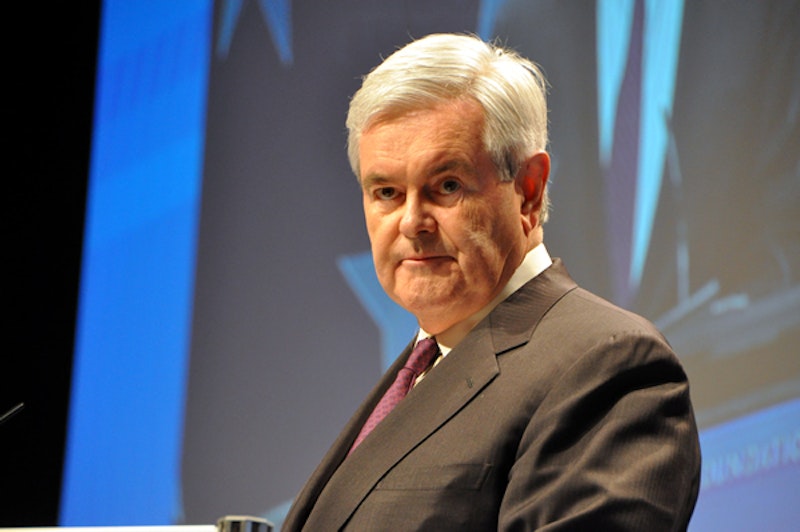 The latest polls show Newt Gingrich is no longer top dog. Three weeks ago Newt was musing on his inevitability. Now he’s down across the country, in Iowa, and in New Hampshire. His only consolation is that Mitt Romney hasn’t really gained. For all the conclusions that have lived and died during the primary run-up, one remains sturdy: Mitt doesn’t make people want to vote for him. Instead he triggers a sick feeling in their stomach that, damn it, they’ll wind up voting for him, the way people wind up catching cold in bad weather or slipping on a stair they didn’t fix.

Here’s another conclusion, a new one but likely to last: A big chunk of the Republican base has turned so whimsical and capricious they can’t be trusted. Instead of answering “Undecided,” they’ve convinced themselves they supported people they didn’t actually support. Consider how Newt was brought down. Various wise observers said attacking him wouldn’t work because he’d already spent a couple of decades demonstrating what he was like. The people who bought him had to know what they were buying. And it’s true that Newt is one of the more memorable people in American politics. He has made a flaming ass of himself with his wayward dick, flapping mouth, hungry wallet, and horrific negotiating skills. Not only did he shut down the government, he convinced the whole country he did it just to be a jerk. That’s just one episode in the Newtiad; there are so many others.

But, as it turned out, attacking him did work. From Monday’s New York Times: “Candidates and their allies have spent more than $600,000 over the past 10 days on television ads in Iowa criticizing Newt Gingrich.” Now the Newt surge is dead and it looks like the ads killed it. How? It’s not like Republicans didn’t see enough of Gingrich the first time around. Regular voters are older than most people, and Republican voters are older than most voters. We’re talking a group of people who were reading papers and watching the news back when Newt commanded the stage. You’d think the sight of him would bring back a flood of memories. He pushed for the first impeachment of a president in 130 years, and the whole mess ended with the president staying and Gingrich getting kicked out. Try to forget that.

My theory: They hadn’t forgotten Newt Gingrich. They’d forgotten that the face they saw on the TV was a person. What lies behind the Newt deflation—and the Bachmann bubble, the Perry moment, and the Cain boomlet—is the ability of modern Republicans to detach themselves from reality. In fact some of them have reached the point where they’ve forgotten there’s anything beyond the perpetual show the right’s media empire puts on the air.

For this bunch, the GOP debates are just an add-on to the spectacle. They see a clutter of faces debating on the screen and pick out one or the other as a target for their enthusiasm. There’s a black one! There’s a woman! There’s the big Texan who’s so tough! Slowly it dawns on them that a particular face puts on a much better show than the others. This face has a versatile set of expressive skills and emits well-formed sentences put together on the fly. It scores at will against the hated moderators, the MSM chumps who stand in for the forces that want to smother America.

Excitement gathers. The face’s owner now enjoys a boom so large it looks like the will of the party, the massing together of a final decision. Forty percent in the polls, my word! But, abruptly, the voters remember that the face is also a person, the same person whose history is such a mess. What reminds them? More television. Romney and Ron Paul place their ad buys; the massing of the party’s will turns out to be just another bounce of the ball.

Newt is now trying to rebuild. Like Rick Perry and Herman Cain, he didn’t bother too much with campaigning until just recently. But he’s going to start a big bus tour in Iowa; instead of being a deflated TV fad, he’ll try his luck as a corporeal, three-dimensional candidate. I suspect that’s not his best format. Good campaigners have to talk with people; Newt talks at people.

Who else is there? Ron Paul leads in Iowa, but he says we should look at the nukes issue from Iran’s point of view—good luck with that. If he hangs on after the field narrows it will be as a Jesse Jackson candidate, somebody who keeps getting beat but represents a philosophy whose adherents won’t go away. Maybe Jon Huntsman will make his move. He and Romney are the only Republican candidates who are not obviously disqualified to be president, and Huntsman has the further advantage of not being Romney. The press could write comparisons to the Obama-Hillary battle.

But Hillary and Obama had the benefit of a party that actually wanted a president. Though nobody likes Romney, they wouldn’t dislike him so much if they would just let him stop lying about himself. The poor man brought universal health care to Massachusetts and did it the way Republicans said they wanted to do it. But then Obama used the same approach to bring universal health care to the country, and anything Obama does must be a threat to freedom. Romney found out that what Republicans want most is to hate their enemy. Tackling and solving a big problem has become a liability for him, something he has to soft-shoe around, because it gets in the way of the Republican opera.

Now it turns out that a crucial slice of the Republican electorate is waiting for the hero of the opera to show up: not someone who gets things done in the real world, but someone who helps them vent their feelings, the candidate that feeds their fantasies. They sample the faces on the TV and watch them go pop. The process has its own charms for them, like stacking pennies or twisting string has its charms for the autistic. They’ve gone into their other place. The worst of it is they want to take the rest of us with them.