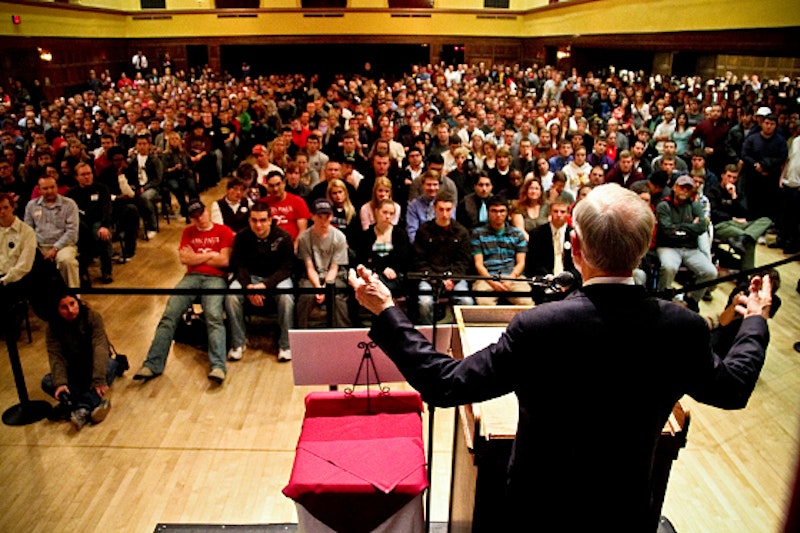 Ron Paul’s campaign lives to see another day. The stage is set now, with Mitt Romney all but assured early GOP ratification, for a third-party Paul candidacy in the general election. Paul isn’t riding the wave of fickle fancy that the other characters did; even though he’s benefitting from being one of the last men standing, head intact. Everyone in the media continues to write him off as a radical and an eccentric on the fringe, despite the fact that he’s easily the most well-spoken candidate of the pack. Yet his popularity perplexes The Wall Street Journal (“Republican protest vote,” despite Paul’s steady rise and ardent support) and MSNBC (“if Paul wins Iowa, we take it out”) equally, and makes them get weirdly defensive.

Everybody seems to be wrong about why people, especially young people, like Paul. FOX pegs him as an advocate for brain-dead stoner America, a friend of the Occupiers, and the left is still whimpering about a racist letter-to-the-editor 20 years ago. Across the board, the media misrepresents Paul’s message and why his supporters so fervently want him elected. The man’s candor and ideas are more straightforward than any other major candidate in recent history. He makes Obama sound like a broken soundboard of ums, ahs, whelps, and howevers. Obama still operates in the grandiose and the abstract, the ideal, and his approach lacks the concise pragmatism that excites Ron Paul supporters. The President slips into vague metaphors and idealism when what everybody in this country wants is essentially an enema. You could say Paul’s happy to be of service.

The man has his flaws like them all, and they’re not minor. Could you really imagine a United States that wouldn’t have given a dime of aid to Japan after their earthquake, or give the cold shoulder to our lone Middle East ally Israel? Would it make any sense to destroy the Department of Education rather than fundamentally reform it? These squibs aren’t borne out of indifference to the poor, the Jews, or the less needy. Paul’s adherence to the Constitution is dogmatic, if a little stiff. But ultimately, his campaign is about personal freedom and respect, something all the other candidates, on both sides, don’t wish to discuss. It’s jarring to hear such staunch support for legalization of all drugs and prostitution, and the abolishment of seat belt laws. Even if not all of it’s practical, it’s refreshing and a glimpse of what we need in our politicians: clarity, openness, and concision. Paul doesn’t obfuscate his positions or his opponent’s positions out of desperation, and that honesty is paying off in spades now. At this point Paul would be nothing but a spoiler in the general, with maybe 10 percent, but if his caucus continues to grow past South Carolina and Romney and Obama continue playing mush-mouth, who knows what could happen come November.