A Race Without First Place 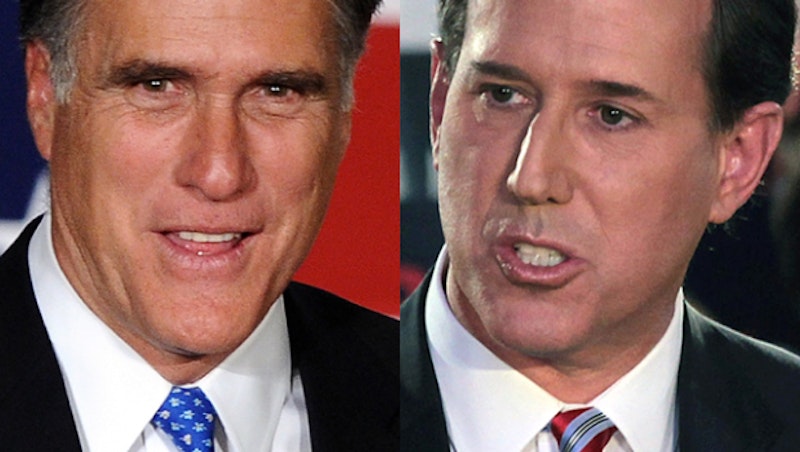 “The person who’s got the official piece of paper is missing,” Karl Rove says on Fox News. It’s 2:04 in the morning. He tells Chris Wallace there’s a county where nobody quite knows what the vote total is, and that his inside source tells him the Romney and Santorum campaigns have put their heads together to figure out what the tally probably was. The result, he says, is that Mitt Romney will be declared official winner of the Iowa caucus by 14 votes. Damn. All this time, and there won’t be an actual winner, just an agreed-upon fudge.

About 2:15 or so, Carl Cameron is doing a location stand-up at Romney headquarters. Behind him are rows of folding chairs with nobody in them. Then whooping fills the air; a crowd of young people comes tumbling into view. Cameron tries to keep going, but behind him they start horsing around among the empty seats. They wear slacks and button shirts, their hair is cut short, and their shirts are tucked in. A number of them have paunches. “The Occupiers are here,” Cameron announces, looking over his shoulder. Megyn Kelly chimes in: “It’s come to this.”

The kids start chanting “Sara, Sara,” then go tumbling out of the place again, no harm done. After five or 10 minutes, Kelly announces a Tweet from Politico: The kids are members of the Romney campaign and Sara is Sara Craig, Romney’s campaign director in Iowa. Presumably the kids were celebrating what Fox News had just told them, though Politico had to tell Fox who they were.

“We’re expecting an official announcement now,” Kelly says, “within the next two minutes, officially, as to the winner of the Iowa caucus. We expect.” It’s 2:30. Time passes; there’s another two-minute warning. More time passes. “Okay,” says Bret Baier, “unfortunately the two minutes have come and gone and we’re still waiting for Matt Strawn, chairman of the Iowa Republican Party, to tell us what is going on.”

Then, finally, Matt Strawn. The cameras pick him up on remote, presumably at Iowa Republican Party headquarters. He’s a slight man with a light bulb head. He looks like an office worker in a commercial, but he wears a good suit and walks with a stride, so the office worker has used the advertised product and found it paid off. He marches up to the podium. “Good evening everybody,” he says. “What a night.”

He announces a record turnout: 122,000. He thanks party officers, then announces the results: 30,015 for Romney, 30,007 for Santorum. Basically, they each get 25% and Romney is the winner by eight votes. Which is a margin only if you squint, but the Iowa caucus doesn’t do recounts. So that’s what we’ve got, that and the memory of the Romney and Santorum reps putting their heads together to fix things up.

At 2:50 or so, Stephen Hayes of The Weekly Standard reflects on the campaign to date. “This has been total chaos, total and utter political chaos, but fun,” he says, punching down hard on “fun,” and he adds that the same goes for tonight. This may be the first time that a Republican has described any election as chaotic but fun. Perhaps he’s talking himself into accepting decline. The record turnout was actually about half what the Democrats managed in 2008, a fact glumly noted by his Fox colleagues a few minutes before. And the reason so many candidates rose and fell before the Iowa vote was that voters are listless and picky, as opposed to overexcited and full of beans.

The Republican electorate just can’t get its head around Mitt Romney. In Iowa, when it came time to do or die, the voters did neither. Instead of winning he has a mini-Florida, as in the electoral victory pasted together for George W. Bush back in 2000. One assumes that the Iowa deal was contrived in good faith and reflects the theoretical returns as best they could be reconstructed. But the returns are still theoretical. It’s a lot like getting more votes than the other guy, but still not the real thing.