The Republican candidate is one spooky blowhard. 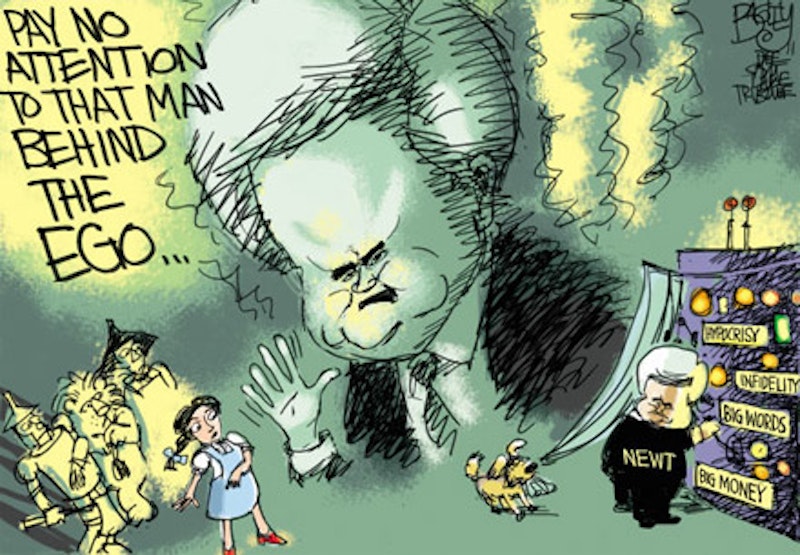 Is Newt Gingrich really crazy or does he just pretend to be? He struts across the American lifescape telling us he’s brilliant on the theory that if he says it often enough people will believe it. The truth is that Gingrich’s brain is about a mile wide and as deep as a snowflake. The big lie no longer works in politics now that Google is everybody’s rap sheet. Gingrich is what a college professor once described as an “intellectual ragpicker,” riffing on ideas that are borrowed from other people but which have no central predicate. He uses history as a convenient reference point, often out of context and loosely construed, hoping that real historians and fact-checkers aren’t paying attention.

But for the bullyboy of bombast, there is one article that is uniquely Gingrichian: His savage attack on the courts that is tantamount to a declaration of martial law by suspending the Constitution. Gingrich said that, as president, he’d enforce the wholesale abolishment of courts whenever he disagreed with their findings and haul judges before Congress to explain their rulings. He blasted “activist” judges, a favorite target of the Republican party’s right flank. And he said during a debate that the judiciary has become “grotesquely dictatorial.” Shakespeare’s character Dick, in Henry VI, wanted to “kill all the lawyers.” Gingrich would kill the law as well.

“Are we forced for a lifetime to keep someone on the bench who is so radically anti-America that they are a threat to the fabric of the country,” Gingrich said. “What kind of judge says you’ll go to jail if the word ‘invocation’ is used? If this isn’t a speech dictatorship, I’d like you to show me what one looks like.” The example Gingrich cites is a federal judge in Texas who blocked prayer in school. He does not point out, however, that the ruling was overturned. But Gingrich, never one to let well enough alone and displaying his usual lack of restraint, continued his rant on the judiciary. He underlined his remarks by saying later that he’d send U.S. Marshalls or the capitol police to force judges to comply with federal subpoenas.

At another point, Gingrich brushed aside the idea that his anarchistic statements would produce a Constitutional crisis. He was quoted as saying: “Actually, the courts are forcing us to a constitutional crisis because of their arrogance and overreach. The courts have been trying to impose an elitist value system on a country that inherently is not elitist.”

The Republican presidential candidates are a scary bunch, but none is as spooky as blowhard Gingrich. During their last debate prior to the January 3, 2012, Iowa caucuses, each was asked what judges they approve of and almost to a person they mentioned, by name or by grouping, the four conservative U.S. Supreme Court judges—John Roberts, Antonin Scalia, Samuel Alito and Clarence Thomas. The word “activist” is a relative term, of course, but there are no more activist judges in the conservative cause than Roberts and Scalia. For example, no single judge pushed harder than Scalia for the court-ordered installation of George W. Bush as president. Thomas’ wife is on the payroll of conservative organizations. And who doesn’t love a court that, in its insidious anthropomorphic ruling, bestows personhood on corporations.

Many conservative Republicans were quick to pounce on Gingrich as a reckless bomb-chucker. Michael Mukasey, attorney general under Bush, was quoted as describing Gingrich’s proposals as “dangerous, ridiculous, totally irresponsible, outrageous off-the-wall and would reduce the entire judicial system to a spectacle.” And George F. Will, the conservative columnist, recently wrote: “But Gingrich’s hunger for distinction has surely been slaked by his full-throated attack on such a judiciary. He is the first presidential candidate to propose a thorough assault on the rule of law. That is the meaning of his vow to break courts to the saddle of politicians, particularly to members of Congress, who rarely even read the laws they pass.”

Nonetheless, Gingrich’s outrageous positions have been playing well among the corn fields of Iowa where GOP presidential candidates come in two distinct flavors—right and far right—to match the fervor of foam-at-the-mouth fundamentalist Republican constituents. Candidates often assume the sentiments of the people whose votes they seek. They stand for nothing except the nearest precinct. Gingrich sat briefly atop the Iowa polls in a state where evangelical Christians dominate the caucuses which mimic elections. Now he’s been downsized by Ron Paul, who has the most efficient ground game and the most lethal advertisements in the Iowa campaign so far. But anything’s possible. Even Rick Santorum appears within striking distance of the Iowa prize—the winner’s headline. Only Mitt Romney seems to be shut out as the first-place showing ricochets among anybody but Mitt. The Iowa caucuses, it should be noted, take place in the state’s 99 counties and are little more than covered-dish suppers and mid-winter hoedowns, some attracting as few as a half dozen participants. The trick to winning in Iowa is enough feet-on-the-ground, door-knob polishers and heated vehicles to transport voters to church social halls and school gymnasiums. The rest is the competition of providing acceptable food and (non-alcoholic?) drink.

Juxtaposed with the burlesque in Washington over the protocol standoff between the White House and Congress, the Iowa GOP roadshow has produced a recent spike in the polls for President Obama and a further slide in voter approval of Congress down to nine percent, according to some the lowest rating ever. Even The Wall Street Journal, has criticized Congress, saying its antics will re-elect Obama even before the election arrives. And the GOP presidential debates are being viewed more as a send-in-the-clowns performance than a genuine exposition of ideas on governance.

The ego-tripping Gingrich may agree or disagree with court rulings but he delights in the applause when he attacks the courts for their decisions on gay marriage and school prayer, two incendiary issues among conservative Christians. This moral outrage, mind you, emanates from a serial adulterer, thrice-married converted Catholic. What he fails to recognize, however, is that the courts were the only route toward issues resolution when legislative bodies—especially Congress—failed or refused to act. Many of the great civil rights advances were won in the courts in the 1960s just as many grievances are being resolved by the courts today because achieving legislative solutions in a deadlocked Congress is virtually impossible. Gingrich likes to present himself as man of big, bold ideas. The usual rule is that if one out of 10 works, the description applies. But it seems that none of Gingrich’s does. His rage against the courts is just the latest example of reckless and undisciplined rhetoric from the GOP’s shock-jock. Gingrich and the other GOP candidates for president may be wowing the fundamentalists in Iowa, but their dithyrambic distortions are no way to win the general election and the presidency. For this, Democrats and Obama ought to bend a knee and express their gratitude.