A look at right-wing PC in action. 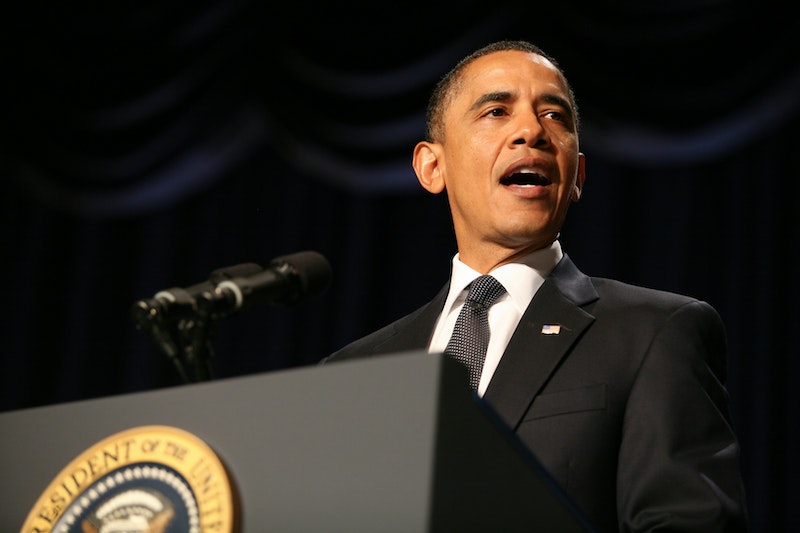 One way to tell PC: when people blame you for being right. What you said wasn't wrong—they will admit that in passing. But you get paragraphs of stomp-and-snort because nobody should ever say what you just said, even if it has the incidental property of being true. Left-wing PC is a famous blight and is practiced by thyroidal college kids and crowd-following office gals. Right-wing PC is practiced mainly by well-paid columnists and takes as its main target President Obama.

Right now they're telling us that Obama just said Christianity is as bad as Islam, maaan. Actually the President said any religion can attract followers who will use their faith as an excuse to do nasty things. Here's the relevant excerpt from his remarks at the National Prayer Breakfast:

So how do we, as people of faith, reconcile these realities—the profound good, the strength, the tenacity, the compassion and love that can flow from all of our faiths, operating alongside those who seek to hijack religious for their own murderous ends?

Humanity has been grappling with these questions throughout human history. And lest we get on our high horse and think this is unique to some other place, remember that during the Crusades and the Inquisition, people committed terrible deeds in the name of Christ. In our home country, slavery and Jim Crow all too often was justified in the name of Christ. Michelle and I returned from India—an incredible, beautiful country, full of magnificent diversity—but a place where, in past years, religious faiths of all types have, on occasion, been targeted by other peoples of faith, simply due to their heritage and their beliefs—acts of intolerance that would have shocked Gandhiji, the person who helped to liberate that nation.

So this is not unique to one group or one religion. There is a tendency in us, a sinful tendency that can pervert and distort our faith.

People haven't had much time for the reflections on India. But the bits touching on Christian behavior have been a minor and unhappy sensation. They are also true. Even Jonah Goldberg, a conservative, says as much: “Obama's right. Terrible things have been done in the name of Christianity. I have yet to meet a Christian who denies this.” Then what's the problem? Goldberg follows this concession by arguing that the Crusades (“despite their terrible organized cruelties”) were defensive, and that there were some inquisitions where people weren't tortured, and that all this was a long time ago whereas radical Islam is misbehaving right now. In general, looking at world maps, he thinks Christianity is just fine, “indisputably a force for the improvement of man... indisputably a great advance for humanity.” Well, people dispute it, but the President is not one of those people.

Looking through the President's remarks, you might ask where he says Christianity isn't really so hot. You're looking for the wrong thing. The right-wing PC-nik wants to find this: a clear statement that Christianity is better. Absent that, the President is committing heresy. He may reflect in his Christian way on the need to stay off our high horse (they call it the sin of pride) and to remember that all mortals are prey to temptation (they call it original sin). But he'd better make clear that Christianity is the good religion.

Why? Not necessarily for the love of Christ. Jonah Goldberg playfully lets us know that's not his motivation: “As odd as it may sound for a guy named Goldberg to point it out,” he writes before launching into his soft-soaping of the Crusades and Inquisition. His object of loyalty is given here: “I see no problem judging the behavior of the Islamic State and its apologists from the vantage point of the West's high horse, because we've earned the right to sit in that saddle.” Christianity is the West's religion, and the West is better. If some facts don't suggest as much, the facts must be squawked at.

Notice how ISIS sneaks in there. Obama says everybody is sinful, so he's saying we shouldn't be so mean about ISIS. This conclusion by Goldberg is something of a miracle, given that Obama is the man bombing ISIS. But the PC., left or right, believes that any idea is just an assertion of loyalty, a declaration for a side. Adherents of right-wing PC can't hear words like Islam, West and Christianity unless some stacking up is being done, one pile against the other. If somebody says we’re all sinful because we’re people, the sentiment just doesn't compute. The wingnuts can read it only as a statement that our side's pile of good isn't any higher than the other side's, and then something deep in their souls is violated. These are the people who got upset when Obama told the world that, exceptional as America is, people in other countries think that their countries are exceptional too. He didn't say they were wrong!

Nothing in the President's remarks about faith was especially challenging or even new. His ideas weren't complicated, but they were ideas and not expressions of allegiance. Therefore a yowling has arisen. That's PC again, voicing its eternal preoccupation: who are you saying is good, and who are you saying is bad? They care about nothing else and can imagine nothing else, and the noise they make can choke the brain. But at least when the college kids make that noise, it's considered a problem. When Jonah Goldberg does, it's a column.