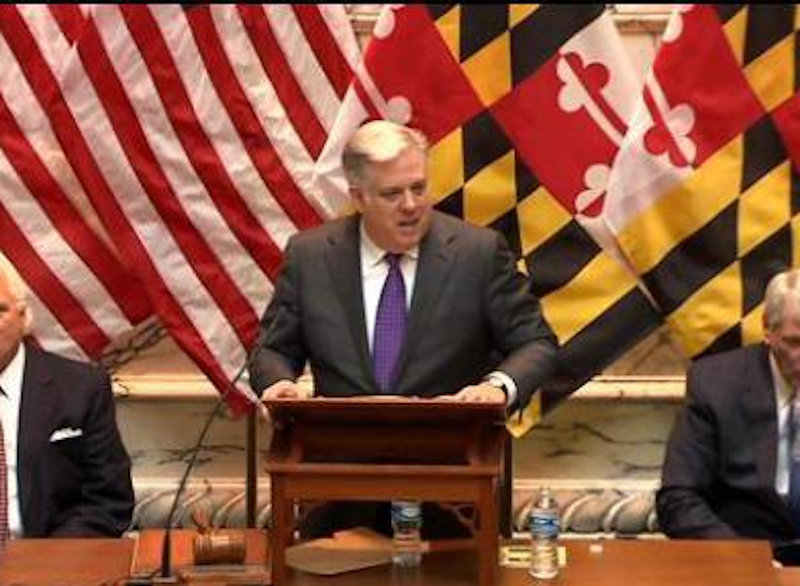 Larry Hogan, Republican governor of Maryland, has proposed a budget worthy of Sam Brownback, his counterpart in Kansas. Every political hobbyist knows what happened in Kansas: The state nearly went bankrupt, had its bond rating downgraded and experienced weak growth because of austerity, less-is-more budgeting and trickle-down economics.

Hogan is doing exactly the opposite of what’s needed to jolt Maryland’s economy. He’s taking money out of circulation instead of pumping it in. This gesture is supposed to make Maryland business-friendly in the same way Brownback’s budget was designed to stimulate business and create jobs and wealth for everyone in Kansas.

Hogan has proposed taking $26 million from the transportation fund and distributing it to the subdivisions as well as eliminating the portion of the gas tax that is indexed to inflation (which is virtually non-existent at the same time gas prices are falling.) The twin actions could seriously jeopardize the bonding capacity of the transportation fund and is the clearest signal yet that Hogan may dump the two proposed mass transit systems, the Red Line in Baltimore and the Purple Line in the Maryland suburbs around Washington. Construction of the two systems would pump more than $6 billion into the economy. The transportation fund has already been drained by construction of the Inter-County Connecter which is under-used and failing to produce the projected toll revenue. Short-changing the fund again will further delay badly-needed infrastructure improvements.

To fulfill another campaign promise, Hogan has proposed eliminating the storm water management fee, or “rain tax.” Either he may not be able to end the fee or the tax will be dumped back on the general fund budgets of the10 subdivisions where it must be funded by EPA dictate. The Supreme Court has ruled that the imposition of fees by federal administrative agencies is legal. In effect, the tax is a fee imposed by federal mandate and not Hogan’s whim. In that case, the tax may come back to bite Hogan.

Hogan has proposed eliminating the income tax on pensions of veterans, policemen and firefighters. In Baltimore City, the police and fire pension systems were about to go broke because of minimal contributions and early retirements by members until Mayor Stephanie Rawlings-Blake’s recent reforms. A federal lawsuit is pending. The point being, firefighters and cops contributed very little to the fund and could retire after minimal service (15 years) and begin second careers. Hogan argued that cops and firefighters put their lives on the line every day. To put it bluntly, their lives are worth no more than anyone else’s. Veterans are volunteers who, by the luck of the draw, may or may not have seen action or could have had a cushy desk job. (n.b. I am a veteran.) Hogan, simply put, would create a separate class of people with preferential treatment and another tax exemption at a time when revenues are short. Translation: He’s pimping to special interests such as police and fire unions.

Another campaign pledge that became a state of the state hand-clapper for Republicans was Hogan’s call for a small business tax exemption on the first $10,000 of personal property. This is an empty gesture in a pauper’s will and, again, taking money out of the treasury when not enough is coming in. In truth, it’s tough to define what a small business really is. Is a small business two people who own an ice cream stand? Or is it a business, as the SBA defines it, with 50 or fewer employees? Hogan wasn’t clear.

In his gloomy state of the state speech, Hogan complained that the Maryland Retirement System is seriously underfunded, a conclusion that is debatable. (Underfunded generally means that if every member died at exactly the same time there wouldn’t be enough money for a full payout, a very unlikely event.) But earlier he cancelled a two percent pay increase for state employees and, presumably, along with it the annual COLA. Hogan’s action, perhaps without understanding it, further undermines the pension system because contributions to the fund are based on a percentage of salary. The pay raise would have helped to ally his fears about underfunding by shoring up the system with greater contributions. And much of the canceled salary increase would have come back to the state in the form of income and sales taxes to help boost treasury receipts.

Finally, to help sanitize the Chesapeake Bay Hogan is actually encouraging further pollution. It has been repeatedly documented that farmers and developers are the major sources of the Bay’s contaminants. But Hogan seems intent, in the name of being business-friendly, on rolling back his predecessor’s new regulations that were intended to mitigate toxic run-off. Hogan was to shift focus to silt-buildup at the Conowingo Dam, which most studies dismiss as major pollutant. But in Maryland, the Bay is business—Big Business—what H. L. Mencken called “the world’s largest protein factory.” Hogan also wants to get into the fracking business in Western Maryland, a lovely scenic region of the state that required decades to recover from the poisonous revenge of strip-mining, which had the same pernicious effect on the environment and humans that are associated with fracking. (The chairman of Exxon, among the world’s most aggressive frackers, has filed a lawsuit to prevent fracking anywhere within miles of his Texas estate.)

So the real question here is whether Hogan is deadly serious or if he’s simply regurgitating the continuous loop of campaign promises that appears stuck in his head. But he has effectively set up a confrontation with Democrats that could end up in a special session if the budget is not adopted by its legal deadline.

It’s difficult to discern the mischievous hand that fashioned Hogan’s fiscal policy. Hogan arrived in the State House with pre-conceived notions that he developed as the leader of “Change Maryland,” the organization that became the centerpiece for his campaign. But there is a detectable spiritual connection between Brownback’s Kansas and Hogan’s Maryland.

Arthur Laffer, creator of the “Laffer Curve,” a keystone of supply-side economics, and a free-lance, think-tank proponent of tax cuts, has offered guidance to both governors. Laffer was the godfather of Brownback’s Kansas budget disaster and in a Baltimore Sun op-ed shortly after Hogan’s election Laffer offered Hogan very much the same advice that led Kansas down the breadcrumb trail toward bankruptcy: Cut taxes and spending and prosperity for everyone will follow. Put another way, Hogan appears to be following national Republican economic orthodoxy rather than anything resembling the traditional Maryland model. (Supply-siders like to recall the Reagan-era tax cuts but they conveniently forget that Ronald Reagan raised taxes 11 times—four as governor of California and seven as president.)

Another adviser to Hogan is Anirban Basu, a Baltimore economist and academic and head of the Sage Policy Group, who has discredited the Maryland model as too reliant on federal largesse and not accommodating enough toward business. This advice comes at a time when President Barack Obama has called for an end to sequestration and has proposed billions in defense spending and infrastructure upgrades. Both would channel a ton of money into Maryland. But tinkering with Maryland’s fiscal structure, as Hogan is, could raise questions at the three bond rating houses that are paid to follow Maryland’s fiscal condition and pose a threat to the state’s triple-A standing, one of only six states with the coveted rating.

It’s easy to see why the pugnacious Democratic Senate President Thomas V.  Mike Miller (D-Calvert) has abruptly turned his wrath on Maryland’s tyro Republican governor. Only a week ago Miller was doing a bipartisan two-step with Hogan. And now Miller, in a spluttering reversal, defames Hogan as a creature from another galaxy. Miller was quoted as saying Hogan’s budget is “not reality. His speech is a fiction. This is the real world. People want the truth.” Read into that a signal that Hogan’s tax-cutting agenda is DOA.

But in the land of the bland the one-liner is king. The best post-speech quote belongs to Sen. Jamie Raskin, Democrat of Montgomery County, as reported in The Sun: “Great guy, but he may need a new speechwriter… He started out by saying that half of the people wanted to leave Maryland, and by the end of the speech, I think the other half did, too”

Muffin man John Paterakis, owner of H&S Bakery and developer of Baltimore’s Harbor East, is back in action after a court-ordered four-year ban from political activity. Paterakis was caught up in the legal imbroglio that drove Sheila Dixon from office as mayor of Baltimore. The judge in the case ordered Paterakis, a well-known political rainmaker and significant contributor to campaigns, to sit on the sidelines for four years and not engage in politics in any way. For Paterakis, the sentence was a blessing in disguise—nobody pestering the multi-millionaire for money or support.

Now that his time is up and he’s free to engage in politics once again, Paterakis made his re-entry in a big bipartisan way. Labels don’t stick to Paterakis. He supports winners and incumbents regardless of party affiliation or ideology. Paterakis recently sponsored a $4000 a plate fundraiser for a “very select” group of 40 business people for Larry Hogan, according to The Washington Post, which obtained a copy of the invitation. At that price, I hope no one got indigestion.