Republicans Against Boehner and McConnell

Bobby Jindal has to sneer at someone. 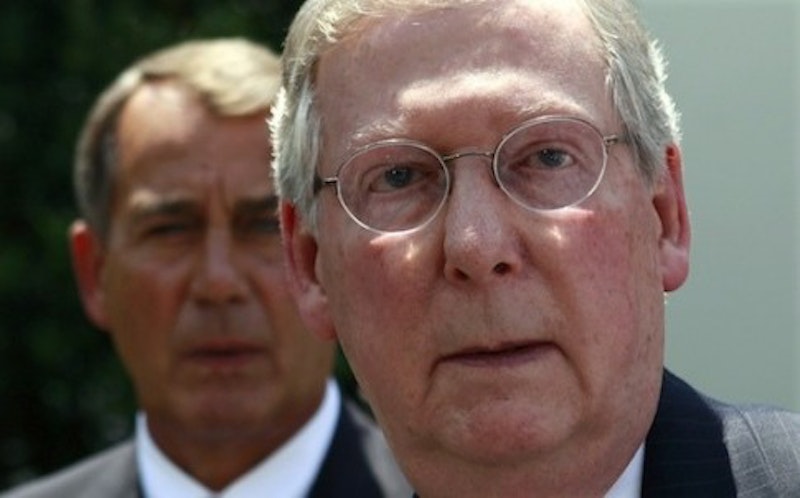 Usually you expect candidates for the GOP presidential nomination trying to curry favor with influential Republicans. Winning a nomination means endorsements, money and support from party leaders; ergo, you should be nice to those party leaders. Or at least, you shouldn't go out of your way to antagonize them.

So it was a little surprising when, last week, Louisiana Gov. Bobby Jindal, currently running hard for president, launched a full-throated sneer at some of the most powerful people in the Republican Party. Specifically, he called out John Boehner and Mitch McConnell for not doing enough to repeal Obamacare. "If the whole point of [the 2014] election was just simply to give John Boehner and Mitch McConnell nicer offices, let’s give them back," Jindal declared.

As a strategy for victory, this seems bizarre. You're deliberately pissing off Boehner and McConnell, people who, as a candidate, you'd think you'd want in your corner. And what's the upside? It would be one thing if Boehner and McConnell were hugely unpopular with Republicans. But, as Jonathan Bernstein points out, they aren't hugely unpopular. They aren't hugely popular either; for the most part, no one has heard of them. "Most citizens have no idea who Boehner and McConnell are—or Nancy Pelosi and Harry Reid," Bernstein argues. "Yet Republicans have not only aimed enormous firepower at those Democratic leaders, but a fair amount at Boehner, too."

Bernstein finds this baffling. He tentatively floats the possibility that Republicans are trying to show how savvy they are. "Maybe a Republican can show real acuity by appreciating attacks on relatively obscure figures, and that creates a demand for Jindal and others to fill," he speculates. He admits that that doesn't sound like a very convincing reason, though.

I think I have a better explanation. Republican attacks on Congressional leaders don't have anything in particular to do with the individuals attacked—which is why Boehner is as good as Pelosi is as good as McConnell for Jindal's purposes. Rather, the point is simply to attack Congress itself.

Americans in general, and Republicans in particular, hate Washington. The Federal government is always figured as innately evil; Congress is always corrupt and out of touch. By sneering at Boehner and McConnell, Jindal isn't showing that he's savvy—he's showing that he's the opposite of savvy. He is not an insider; he is opposed to all those people who are already sitting in the capital, whatever their names or their parties may be. This is clear in his further comments, in which he tells Congressional Republicans that they need to repeal Obamacare, and warns, "Don’t become just cheaper Democrats. We don’t need Democrat-lite.”

There's no way the Congress can repeal Obamacare; they don't have the votes to override an Obama veto. But that's fine with Jindal. He doesn't really want Obamacare repealed. He just wants to come across as a true conservative who hates Congress, just like all conservative Americans hate Congress.

Democrats can hate Congress too, but the rhetoric is slightly different. In 2008 Barack Obama talked about how he was going to sweep into Washington and get everyone to compromise and get things done. He promised essentially to make Congress work better—and when you're promising greater efficiency and comity, it doesn't make much sense to create a personalized scapegoat or villain. But Republicans are much more apt to demonize the legislature as innately malevolent, and its easier to hate someone if they're someone specific. So Republicans hate specific members of Congress, not because they think anyone actually cares about Nancy Pelosi or Mitch McConnell, but because if you're going to denounce someone, you denounce them by name.