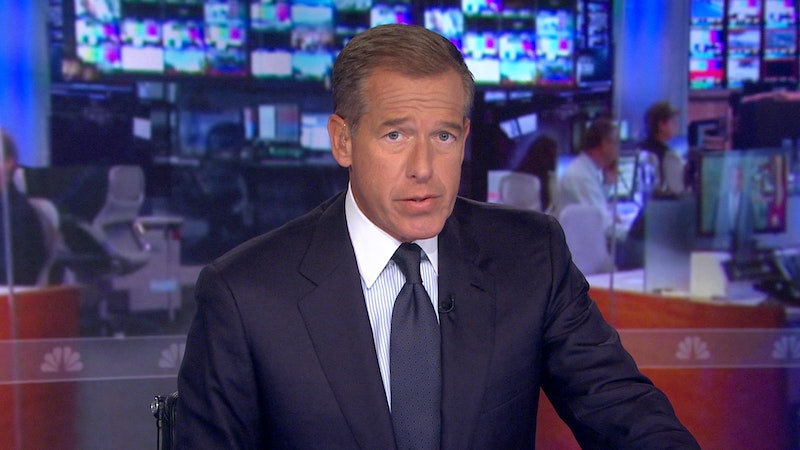 Who watches the network (or cable) nightly evening news broadcasts anymore? That’s not an entirely facetious question, for while NBC, ABC and CBS still draw millions of viewers at 6:30 or 7:00—half the number of just a few decades ago—the era of the “anchor” is clearly over. As the flap over NBC’s Brian Williams fabricating stories about his 2003 Iraq visit continue—and who knows, he might be resigning any hour today—I realized that I didn’t even know who his competitors were. Had to look it up: David Muir on ABC and Scott Pelley for CBS, and I’ve never seen one of their broadcasts. Ten bucks says I’m not alone.

In a New York Times story today (which required three reporters), there was one sentence that stuck out: “What is clear is that the trustworthiness of one of America’s best-known and most revered TV journalists has been damaged, and that the moral authority of the nightly network news anchor, already diminished in the modern media era, has been dealt another blow.”

Really? Who exactly “reveres” Brian Williams as a journalist? I suppose his industry buddies and the celebrities he hob-nobs with would say that Williams, who earns a reported $10 million a year to read news that’s prepared by an NBC staff, is in the pantheon of TV personalities, but that’s standard log-rolling. As for “moral authority,” that’s silliness. Old-timers remember when CBS’ Walter Cronkite was nationally known as the “the most trusted man in America,” and though I did watch his broadcast—and Huntley/Brinkley—it was mostly out of habit, a means of learning of breaking news that occurred after the afternoon newspapers were delivered. And Cronkite did have actual experience as a journalist, covering World War II for United Press before joining CBS in the early 50s, recruited by Edward R. Murrow. But while Cronkite excelled at projecting an air of gravitas, his self-righteousness grew more and more tiresome as he aged.

His successor Dan Rather was a lot more entertaining (and compared to the serious dailies, that’s what TV News was), even if his quirky persona was off-putting to the holier-than-thou Washington/New York establishment. Rather’s baiting of Richard Nixon while still a CBS reporter was terrific theater, and the still-quizzical “Kenneth, what’s the frequency” controversy and his one-week sign-off of the Evening News with “Courage” was hilarious. Rather slithered into Jon Stewart territory at a time when the future Daily Show host was seeking work as a stand-up comic.

While we’re at it, let’s not forget that the industry-beloved Tom Brokaw, Williams’ predecessor as NBC anchor and alleged mentor, was responsible for coining the term “The Greatest Generation” for a segment of the population—those who grew up in the Depression and fought in World War II—that didn’t particularly desire such recognition. But Brokaw made a bundle!

I’m assuming that Williams, at some point, will have to go, the victim of his own self-aggrandizement and an unforgiving social media, which is neither here nor there to me, since I never took the guy seriously anyway. Who’ll be his replacement? NBC has a thin bench, demonstrated by the toady Chuck Todd hosting the onetime Sunday morning staple Meet the Press after the insufferable David Gregory was mercifully canned. I’d nominate Willie Geist, the 39-year-old co-anchor of MSNBC’s Morning Joe and a co-host on the third hour of The Today Show. Even though he’s forced to perform all sorts of nonsense on Today, you get the feeling Geist could rise to the occasion to take over from Williams. That said, I still wouldn’t watch NBC’s Nightly News.