Unlike Jeb Bush, he could defeat Hillary Clinton. 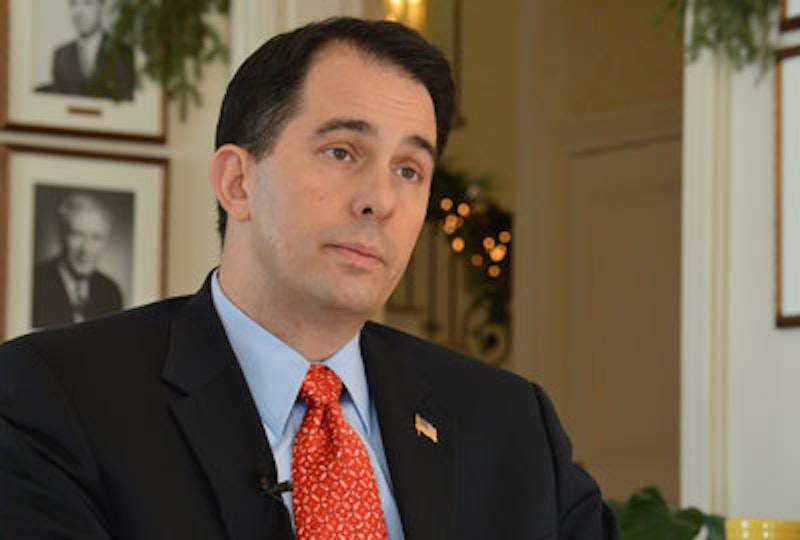 Not all Democratic National Committee flacks disguised as reporters/pundits are as transparent as Michael Tomasky, who collects paychecks from The Daily Beast. Instead of dismissing the large field of potential Republican presidential candidates as “astonishingly weak” as Tomasky does in a Feb. 2 article headlined “GOP: Still the Party of Stupid,” others ask if a certain candidate (invariably described as “flavor of the month”) is “peaking too soon” in the very, very early polls.

There’s little question that most of the media will, after kicking her around some, favor Hillary Clinton in the primaries and, assuming she wins the nomination, the general election. But there’s a lot of time to kill before the 2016 campaign kicks into high gear, so while Clinton assembles 200 “fiscal experts” to help her formulate a credible stance on income inequality (doesn’t anyone remember that Hillary’s plethora of other experts bogged down and doomed her healthcare initiative during Bill’s first term?), the media focuses mostly on Jeb Bush, drooling at the prospect of two political “dynasties” facing off. It’s said that the GOP “establishment” (also described as the “adults”) prefers a fairly well-known candidate like the former Florida governor, and maybe that’s true, but the media’s had just as big a hand in plumping for his candidacy. Business as usual, although the attention given to the bombastic Gov. Chris Christie, a ticking time-bomb of gaffes and skeletons, is more puzzling. Laziness, I guess, and reams of colorful material and fat jokes.

But Tomasky takes the Democratic shilling to a new level. He begins his column by writing that despite his “downsides,” in 2012 Mitt Romney at least “looked like a president,” as does Jeb Bush this time around. The rest, specifically Wisconsin Gov. Scott Walker (“flavor of the month”), “sound” like they’re running for leader of the “Tea Party Caucus.” Before a weak attempt to eviscerate Walker, Tomasky writes: “I’ve been reading through their ‘books.’ Yes, I know. You’re welcome. [Typical lame humor attempt]. They’re ridiculous. I can’t say this with 100 percent certainty, but I may not have seen the word ‘wages’ once. I certainly didn’t see a discussion of wage stagnation anywhere. That’s just one of a hundred examples I could cite.”

Not surprisingly, Tomasky doesn’t name a single book by a GOP candidate, let alone illuminate readers on why the books are “ridiculous.” He also omits the fact that all books published ahead of a possible presidential run are campaign props (or advertisements) and are largely ignored. I haven’t read any of these GOP books, and didn’t touch Hillary Clinton’s widely-panned and sales bust Hard Choices.

Tomasky makes a fair point that Walker muffed a few questions about Syria on a Sunday talk show, which isn’t surprising since he’s a governor and is just starting to hire foreign policy advisers. If Walker’s a legitimate candidate, which I believe he is, in several months these rookie mistakes will be footnotes. In reference to polls where Walker’s gained, Tomasky writes: “We can’t say for sure why [Jeb] Bush has fallen, but it seems clear that Walker has gained on the strength, so to speak, of his empty-calorie bromides.”

Probably because Tomasky is rooting for a Jeb nomination, he doesn’t explain to his readers why Bush is in disfavor with the GOP electorate: he can’t win. It’s his misfortune to have the same last name as his brother George and no matter how sensible his positions are—to me, at least, particularly on immigration—it’s less than eight years since “43” left office as one of the most unpopular presidents.

I think the reason why Tomasky—soon to be followed by less blatantly biased journalists—is bashing Walker as if he’s a joke candidate like Donald Trump, Al Sharpton or Herman Cain, is because if the Governor prevails in the primaries he has a real shot of winning. (Unlike Romney, whose ham-handed campaign, save for that Denver debate, was a debacle start to finish.”) Conservative activists are nervous that Walker’s going soft on immigration (and Sen. Ted Cruz, the Texan demagogue, will have a ball with that), but are still impressed by his three victories in four years (one a re-call) in the blue-leaning Wisconsin.

Yet Walker’s biggest attribute, which is barely acknowledged by the media in a campaign environment that’s income inequality non-stop, is that he’s a middle-class pol who hasn’t enriched himself by exorbitant speaking fees or board directorships. Think of multimillionaire Hillary Clinton (and the high-rolling Wall Street/Hollywood donors in her corner) trying to explain how she’s one of the “regular folks” who, borrowing from her husband, “feels their pain.” Walker isn’t charismatic (nor is Hillary), but that might not matter in this post-Obama cycle. Walker’s a union-buster, which is a popular stance in most of the country—and it’s not as if any Republican will attract union voters anyway. Walker, like all the GOP candidates, is anti-Obamacare, which also won’t hurt him.

I’ve no idea whether Walker will pull a Rick Perry and flame out early, but I suspect he’s far too wily for that and will be prepared for the debates. He is, in other words, a very legitimate candidate, and unlike Bush, will provide a start contrast to Clinton: a representative of the middle class vs. a plutocrat. For most Americans, that’s a compelling disparity.