An executive order on campus freedom would put advocates of free expression in a bind. 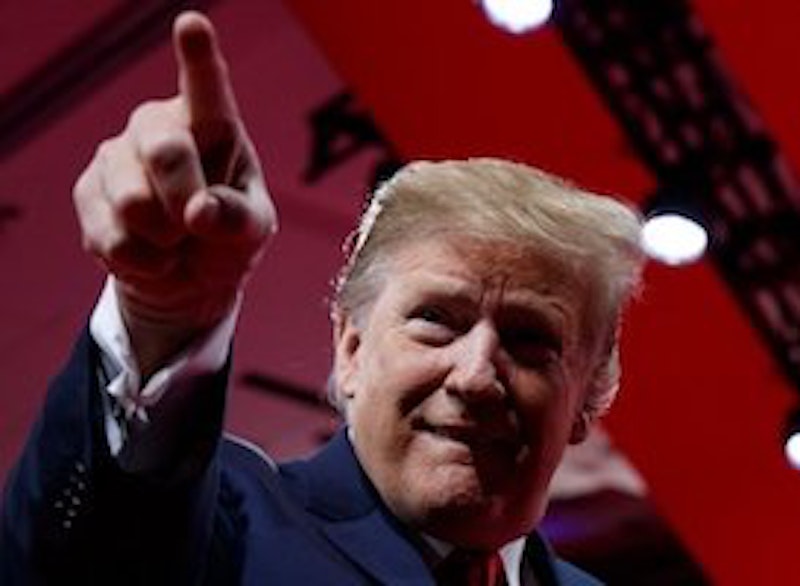 In his two-hour speech to CPAC on Saturday (in so many ways, the man is getting to be a Hugo Chavez) Donald Trump suggested that he’s going to sign an executive order tying federal funding of colleges and universities to their preservation of free speech rights. This would affect virtually all institutions of higher education in the U.S., which rely heavily on various federal sources, such as loan guarantees and research grants.

Such mechanisms have previously changed American higher education profoundly. Title IX, the 1972 law that’s affected every aspect of campus life, reads as follows: "No person in the United States shall, on the basis of sex, be excluded from participation in, be denied the benefits of, or be subjected to discrimination under any education program or activity receiving Federal financial assistance." Whatever colleges may have thought when it was imposed, they all purport to conduct themselves enthusiastically by its standards now. That's a law passed by Congress, however, not an executive order, and it's not clear that a unilateral declaration by the administration, configured around funding, would be constitutional.

But whether it's an order or a law, drafting it might be pretty straightforward. "No person in the United States shall, on the basis of expression that is protected by the First Amendment, be excluded from participation in, be denied the benefits of, or be subjected to discrimination under any education program or activity receiving Federal financial assistance."

I work on a college campus, and try to stand sentinel for free speech. Offhand, I’d enthusiastically support this, particularly if it took the form of a law rather than an executive order. I don't see why the federal government, whose forms and values are supposed to be expressed in the Constitution, would fund little bubbles of rights repression, or institutions which curtail constitutionally-protected speech, any more than they should fund states that enforce legal segregation, for example.

It's hard to tell how serious Trump is about such an executive order; it’s likely nothing will come of it. But when I heard about it, and despite the fact that I’d endorse it if proposed, I groaned, because it redoubles the association of free speech with the worst part of the right wing: the racist, sexist part. More and more every day, advocacy of free speech is associated with Trumpery. Thus, more and more, advocates of free speech like me are being associated with Trump and his positions. This is liable to make defending free speech on campus damn near impossible, and it’s a position I hate to be in. In the eyes of a lot of people who work at colleges or go to school there, free expression itself is discredited in being advocated by Trump. It wouldn't surprise me if publicly advocating free speech itself is the next object of repression.

So even though a Title IX might have a dramatically liberating effect in the long run, in the short it's liable to be disastrous. I can envision a situation in which “freedom of speech” might as well be “MAGA.” (We're already in a situation in which walking through campus in a MAGA hat would be like trying to stroll through town in a Klan robe.) Very likely, during the 2019-20 academic year, we'll see the following text straightforwardly condemned as hate speech by the students and faculty somewhere: "Congress shall make no law respecting an establishment of religion or prohibiting the free exercise thereof, or abridging the freedom of speech or of the press, or the right of the people peaceably to assemble and to petition the government for a redress of grievances."

I'm not going to say again all the reasons why I don't think free speech is fascism. I'm not going to call again on the specters of Emma Goldman, Mario Savio, and Martin Luther King, Jr., to defend my position, or discuss the centrality of free expression to any decent vision of education. I will point to one example, however: the explosions of speech repression around Rep. Ilhan Omar. She’s the subject of screeching anti-Muslim invective, even as she is, in turn, also getting shut down for alleged anti-Semitism of a number of her own remarks, e.g. "I want to talk about the political influence in this country that says it is okay for people to push for allegiance to a foreign country.” One of her colleagues described that as "a vile anti-Semitic slur."

Very similar issues, including trading charges of Islamophobia and anti-Semitism, are roiling not only the Labour Party in the UK, but college campuses across the country. And one thing that this particular religious war shows is that on campus, your leftist critique of the policies of the state of Israel is very likely to get you lobbed you into the speech gulag, where you’ll meet all your conservative opponents.

Now, as you languish together in your cell/dormitory, you might resolve to defend each other's right to engage in any form of constitutionally-protected speech. Or you could keep trying to shut the other side up, or consign your already-repressed opponents to a gulag within the gulag. There are liable to be plenty of moments, campus leftist, in which you might come to wish that you hadn't established the sort of censorship you're enforcing now.