Centrists can be bad referees. 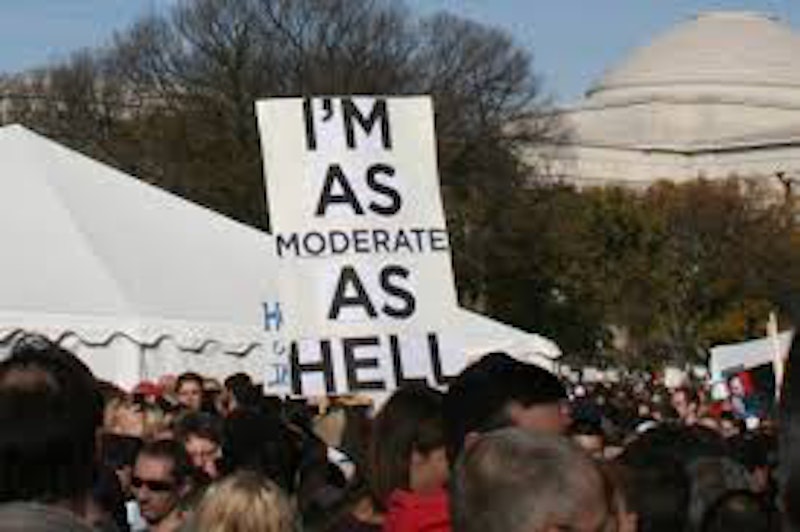 The model many of us have in our heads, in which the recent wave of people loudly denouncing every perceived minute example of racism/sexism/etc. is far-left, may be fundamentally flawed.

As leftist writer Michael Tracey noted in a recent talk at the Quillette Circle, some of the loudest cries of that sort—the noisiest SJWs, if you will, though he understandably dislikes that pejorative term—are moderate liberals quite happy to use knee-jerk accusations of racism/sexism/etc. even to silence, say, Bernie Sanders supporters—anyone who threatens the noisy liberal establishment that, with the aid of its many friends in the media, has become so adept at drowning out challenges to its dominance.

I’m reminded of an essay in the Brooklyn leftist journal n+1 over a decade ago (time flies and I don’t quite get around to fixing public discourse singlehandedly, though I’m trying), which made the counterintuitive argument that p.c. (to use the older abbreviation for essentially the same phenomenon) is actually a very conservative, bourgeois, fashionable phenomenon by the standards of (very roughly speaking) the Old Left. It’s a hell of a lot easier, you might say, to get people to stop using the word “poor” than it is to actually, you know, fix the economy or create wealth. (Repeat this process for “rape victim,” “retarded person,” “disabled,” or whatever the next locus of pyrrhic terminological victory is, roughly zero being done in the process to prevent rape, boost intelligence, or repair spines.)

This may help explain why some people on the actual left and the economics-oriented right are more comfortable talking to each other than are some people arrayed around the political center. The real socialists and real libertarians are all interested in drastic policy changes. Remember policy? The center, perversely, may be learning to combine lots of outrage-signaling (which keeps the spectating masses busy) with minuscule policy tinkering. Signaling is especially easy for fashionable people, needless to say. They know when to scream in unison and which ribbons to wear.

(One weird side effect may be the tendency of the fashionable moderate-left to spend much of its time screaming at the far right, which shares the fashionable left’s obsessions with sex and race and is happy to fight, leapfrogging over the confused and startled center-right, largely to the detriment of the nation, I’d argue, though no faction is looking good these days.)

There are worse things than tinkering—full-blown communism, for example. I’ve never believed that intelligent, polite conversation necessarily leads to positive policy outcomes. Sometimes, it’s merciful that loud idiots have less grandiose political visions than do the intelligentsia. But once you start noticing phenomena that fit into this “noisy but unambitious center” model of our political era, evidence is everywhere.

It explains a real heterodox leftist writer not so unlike Tracey, Glenn Greenwald, having to point out MSNBC lying about a Bernie Sanders speech to make it sound racially insensitive. As Greenwald rightly says, casual observers may just think of two sides in politics, right and left, with MSNBC on the left, but it’s a mouthpiece for the Democratic Party establishment first (think Kamala Harris and the Clintons) and a forum for thorough examination of hardcore leftist philosophy only secondarily, if at all. (Likewise, it’s a safe bet that no matter whom the GOP’s 2024 nominee is, Fox News will suddenly care far more about that person’s ideas than those of, say, Edmund Burke or some new movement of hardcore-agrarian laissez-faire economists attacking the nominee from the right.)

Similarly, CNN doesn’t just hate conservatives: It’s recently been caught stacking an audience with anti-Sanders mainstream Democrat political operatives. And watching establishment tech companies bashing the far right once they start having an impact, or watching establishment Democrats marginalizing antiwar Tulsi Gabbard, is enough to make a man just start rooting for the fringe in general, of any stripe, against the manipulators at the center, who can now adeptly summon noise yet have no souls.

The respectable center-left is now full of people who’ll have no trouble, once they get their marching orders, declaring right-wing critics of Kamala Harris “racist” and bigoted in 2020, even if the same right-wingers like Gabbard, who isn’t all-white and isn’t a Christian, either. No need to get into heavy philosophical or policy distinctions when you have the broad brush of racism/sexism/etc. accusations to deploy.

To save ourselves, then, we’re not merely going to have to avoid “extremists” making noise and do-nothing establishment centrists who love to tinker (in ways that somehow always end up doing little except enriching them and their cronies). We’re increasingly going to have to beware those bland centrists using the noisemakers, like a new and more political version of bread and circuses, to create the false impression there is an imminent risk of things changing. In practical policy terms, very little is changing, as we impractical extremists are painfully aware.