Trump will dismiss impeachment as a rigged process. 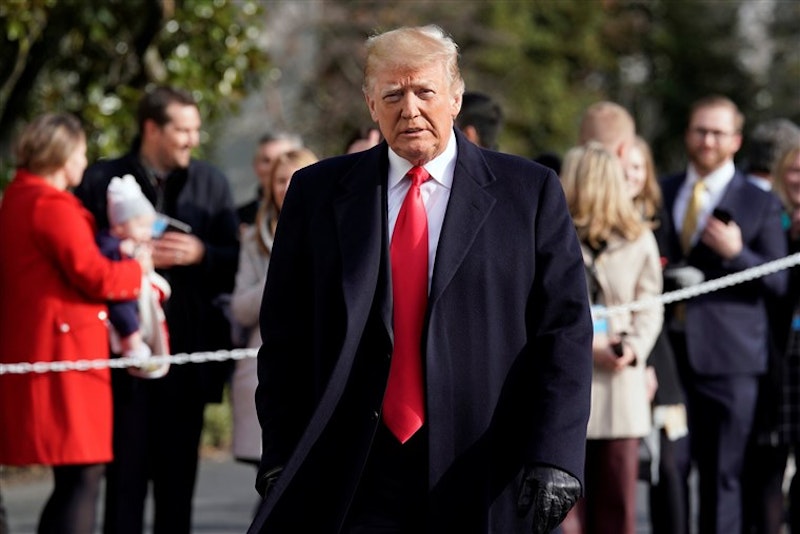 Michael Cohen closed his appearance before Congress on Wednesday by saying “Given my experience working for Mr. Trump, I fear that if he loses the election in 2020 that there will never be a peaceful transition of power.” I have the feeling he’s not exaggerating, at least about what he feels.

Cohen’s not a disinterested observer of Trump’s misconduct, but the comment echoes an opinion piece published on CNN.com several days ago. Written by Joshua A. Geltzer—current executive director and visiting professor of law at Georgetown Law Center’s Institute for Constitutional Advocacy and Protection, and former deputy legal adviser at the NSC—the article argues that if Trump loses in 2020 he might do what he hinted in 2016, and refuse to accept the results.

I don’t know Trump the way Cohen does and I’m nowhere near as versed in American constitutional law as Geltzer. But this idea has occurred to me, as well. I’d go a step further: for Americans, it’s worth thinking about what to do if Trump refuses to go under any circumstances.

Barring death or catastrophic injury, Trump will have to leave the Presidency for one of three reasons: because he’s been impeached and convicted, loses the 2020 election, or because he has served two full terms. What happens, if, in any of these cases, he doesn’t accept that his time as president has ended? Americans are used to, as Cohen says, peaceful transitions of power. What happens if Trump, in this as in so much else, refuses to follow American tradition?

Impeachment looks unlikely at this point, but even if it happens it’s probably safe to assume Trump would dismiss it as a rigged process. Since whenever Trump’s beaten he argues he’s been victimized by unfairness, it strikes me as probable he’d make the same argument if he loses the 2020 election. Even if he wins, then four years later he might not want to give up being boss. Maybe he’d argue unfairness again: if a Democrat like Franklin Roosevelt wasn’t limited to two terms, then it’d be unfair to limit a Republican to eight years.

Trump always has an excuse. No amount of whining is too much. For his base, no amount of squealing reveals his weakness, and no outrage goes too far. What if he ignores the Constitution? Will they finally decide that’s out of bounds?

To ask the question answers it. Why would the people who’d followed him so far stop there? Perhaps a better question is, would the Republican Party finally find a line it couldn’t cross? That depends on the specific political circumstances at whatever point the issue comes up. If Trump’s been impeached, that implies his popularity’s actually dropped, and he has no leverage over Republican lawmakers. But a close election? A 2024 in which Trump’s approval rating still hovers at 80 percent or more among the Republican base?

I don’t say Trump will absolutely choose to fight removal from office—though I wonder how much he’s counting on the immunity from indictment he currently enjoys as president. Still, as Splice Today contributor Tracy Loxley observed on Twitter, Trump’s likely to fight just as long as it takes for him not to look like a loser, or convince himself he isn’t one. That in turn may depend on Fox and Friends and his other enablers.

There’s another argument that Trump won’t try to upend this apple cart; that he’s less unlike previous presidents than the media bleating lets on. That he’s not philosophically a dictator. You can argue he hasn’t failed as comprehensively as George W. Bush, though he’s only had two years instead of Bush’s eight. Why worry more about him seizing power than any other commander-in-chief?

I think it’s true Trump’s desire for power is more like past presidents than a lot of Americans want to accept. But he’s also less restrained by intelligence or common sense. He believes in pushing until he gets his way; if not a dictator by conviction, he is by temperament. And he hasn’t yet faced absolute consequences for his action. He hasn’t had his nose rubbed in reality. Until that happens, what reason does he have not to push on further and further?

Perhaps his own weakness. Trump doesn’t stand up well to determined opponents. He blusters, declares victory and goes home. It’s possible that a strong pushback would get him to step down and follow the law. How strong would that pushback have to be? Delivered by whom? We might yet find out.

What I’m outlining is just a potential scenario, and one that might not take place. But I think it’s possible. So does Joshua Geltzer. So does Michael Cohen (or so he says). One way or another, nothing’s imminent; Trump’s not facing removal from office tomorrow, next week, or next month. But at some point he’ll be expected to step down. Maybe he won’t.