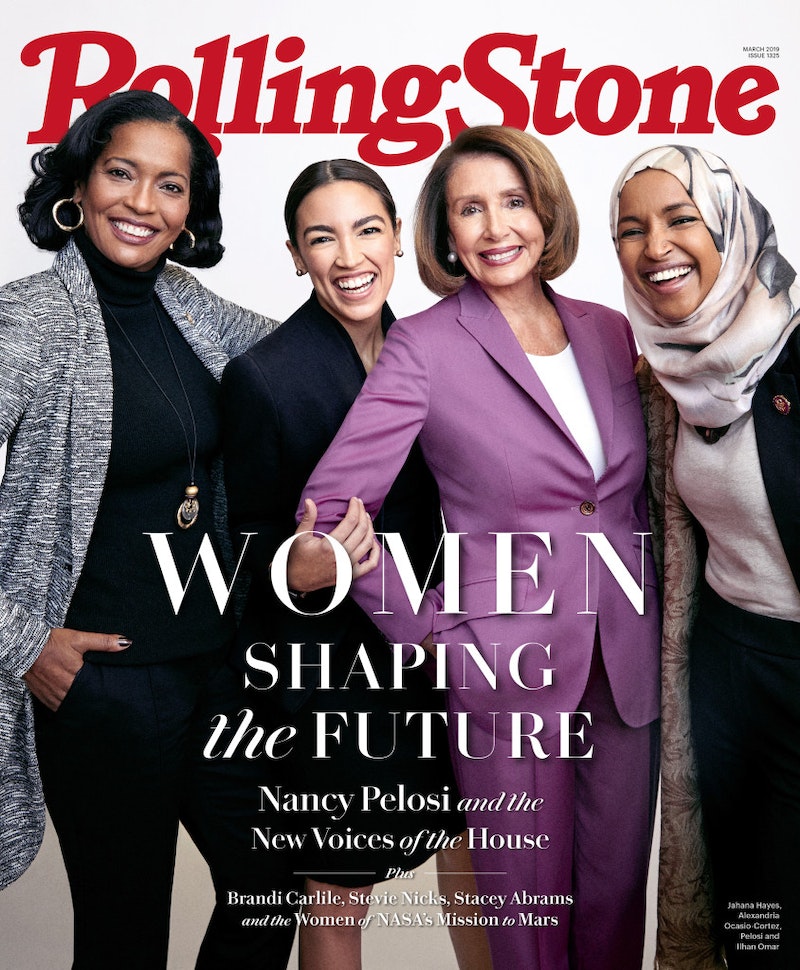 Sometimes a story falls in your lap, or, like on Monday, arrives scrunched up in your mailbox looking like a Bed Bath & Beyond catalog. I still receive the print edition Rolling Stone despite cancelling my subscription a year ago. Six months ago, RS switched back to perfect bound printings—maybe that’s the death rattle. I keep them around but rarely read issues the day they arrive. Monday was an exception: the March cover story is “Women Shaping the Future: Nancy Pelosi and the New Voices of the House.”

Standing four abreast and smiling ear-to-ear on the cover are Jahana Hayes, Alexandria Ocasio-Cortez, Nancy Pelosi, and Ilhan Omar. There’s no way this cover photo was taken after February 11, when Omar criticized AIPAC and was besieged by a bipartisan kettle of vultures, forced to apologize as if at gunpoint. She deserves credit for continuing to criticize America’s unwavering support of Israel and complicity in its crimes. Important to note is her equally vociferous criticism of similarly questionable allegiances with Saudi Arabia, Pakistan, and Egypt—Julia Ioffe ate her shoe on Monday when she asked, in a since deleted tweet, “Surely her condemnations of the excesses of those governments are just as fiery?” Whatever happened to “Nevertheless, she persisted” as a rallying cry? Is it only to be invoked when Elizabeth Warren filibusters and makes Mitch McConnell mad?

Of course RS former owner Jann Wenner insisted on attending the Pelosi interview with staff writer Tessa Stuart, despite selling the magazine to Penske Media Co. in 2018 and stepping aside to let son Gus become President and CEO (Jann is still on as “Editorial Director”). They gave her fancy chocolates, joked that “Rolling Stone interviews used to start with pot…” before getting into the nitty gritty of the puffiest of puff pieces imaginable. Recounting it is not only unnecessary but more importantly, boring—no one needs to read about Pelosi’s valiant struggle being born the daughter of a Baltimore mayor to becoming first female Speaker of the House. One crumb: when asked about her personal and professional “dynamic” with Donald Trump, she skirted: “How can I say this? I’m respectful of the office that he holds. I see every challenge as an opportunity, and I pray for him and I pray for the United States of America.”

Good lord, it’s all there: the euphemisms, the ineffectual language, the liberal passive aggression and aloof snobbery, the retrograde “respect for the office” that was destroyed in 2016, and perhaps most nauseating, prayers in the name of Trump and our country. As if Pelosi actually believes in a god higher than her gavel. Ilhan Omar’s portion of the interview is a hilarious read in light of what’s happened since, and all of that hypocritical tokenism and marginalization is clear here. The DNC likes their Muslim representatives to be seen—wearing a head scarf, of course—but not heard (one imagines Pelosi and Tom Perez wishing Omar came into Congress wearing a full body black burqa instead).

Omar’s response to dealing with the reality of President Donald Trump is more direct and relatable: “I just want to hide. But I can’t because I represent people who feel as much pain—if not more—because they don’t have the voice that I have.” Duty bound, she’s used her position merely to ask questions, and maybe initiate a discussion. In response, colleagues like Juan Vargas have said, “Questioning support for the U.S.-Israel relationship is unacceptable.” Baseless allegations of anti-Semitism and promoting harmful stereotypes have been flung at Omar for merely asking that question.

This assertion, a given for many Americans past a certain age and almost every congressional representative, is ridiculous, especially when someone like Rep. Steve King is still in office. If “questioning the U.S.-Israel relationship is unacceptable,” what about King’s history of racist remarks and his recent support of white supremacy? He got some blowback this time—only 15 years after he was elected to the House. If politicians are going to tolerate him espousing hateful rhetoric and harmful stereotypes, why can’t they take Omar’s fair questions?

The overwhelming effort to smear and silence Omar on February 11 betrayed a disturbing automatic allegiance that proved her point: if the first Muslim representative sworn in wearing a head scarf—so beloved by Pelosi and co. when she was simply safe accoutrement—is pilloried by both sides for merely criticizing AIPAC, there’s something we need to talk about. As far as “off limits topics,” did everyone forget the hemming and hawing after Charlottesville over whether or not neo-Nazis had a right to march? It's alarming that an issue of comparable seriousness is dismissed out of hand, much quicker than fringe right denunciations. I hope RS enjoyed their photo-op faux pas, and may Omar and others continue to ask questions many people find too difficult to bear.