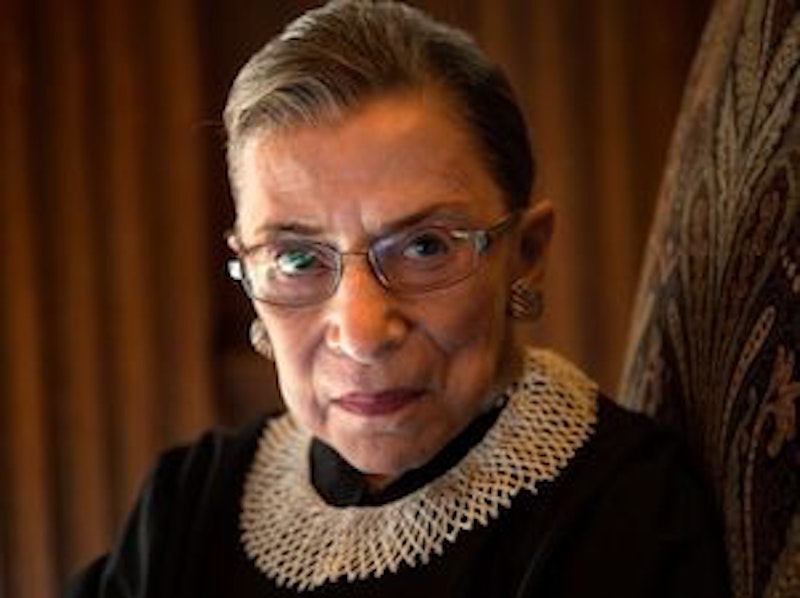 Some jokers on the right had all but declared Supreme Court Justice Ruth Bader Ginsburg deceased after her long absence from work.

Would that the meme-makers and rhetorical bomb-lobbers had put as much energy into celebrating the fact that last week she returned to deliver a (unanimous) decision by the Court that shored up property rights and dealt a blow to big government. It stated that civil forfeiture, such as the seizure of your entire car over a small amount of drugs (which shouldn’t be illegal in the first place), can be seen as an excessive fine.

This isn’t as good as ending the entire war on drugs—or better yet affirming that no one including the government can take property for any reason whatsoever, ever—but it’s a positive step. The unanimity of the decision is also a reminder that secure property rights can create harmony across the political spectrum. No one really wants to have his or her stuff stolen. This decision was also a reminder that often-badmouthed “unelected judges” can be bulwarks of liberty when more-democratic institutions such as legislatures and heads of state fail us.

Democracy, in the simple majoritarian sense, is overrated anyway. Indeed, the oldest evil is people thinking they gain rights to use others’ bodies or property merely by outnumbering them. Individualist thinking tends to shore up the rights that protect us against the mob (whether that mob is right-wing or left-wing), while tribalistic, collectivist thinking tramples those rights, again and again. Consider the nonsense that various elected political figures got up to just in the past week or so while judges were constraining the runaway state.

Socialist Democrat Rep. Alexandria Ocasio-Cortez (who some claim we shouldn’t worry about, since, hey, she’s not president yet) tweeted last week, in strikingly in-egalitarian fashion: “Yup. If you don’t like the #GreenNewDeal, then come up with your own ambitious, on-scale proposal to address the global climate crisis. Until then, we're in charge—and you’re just shouting from the cheap seats.”

It’s good to see her fellow members of Congress Pelosi and Feinstein gently calling her and her (possibly $93 trillion) plan nuts. It might be helpful if some undemocratic officials here in New York City manage to redistrict Ocasio out of political existence. New York politics caused Ocasio, after all, by gerrymandering an overwhelmingly Hispanic district that can now probably be trusted to vote for Ocasio no matter what she says or does. Prepare for the Green Long Haul, in other words. And once more, as on so many prior occasions, my apologies to the rest of America for New York City, fount of corruption and totalitarianism.

This hellhole created Trump and Fox News, too, you know, not to mention Bernie Sanders.

And if you’re tempted to think only the left, as represented by people like Ocasio and Sanders, is a threat to property rights, consider the irresponsible way the right has been talking about the Wall and walls in general lately. First of all, since the Wall is a government-funded project, I would’ve been delighted if the government had remained shut down and the Wall un-built, forever, aside perhaps from a small plaque reading “Look upon my works, ye mighty, and despair!” (with a picture of either the poet Shelley or the supervillain Ozymandias from Watchmen next to it; I’m not picky).

Almost as troubling as the actual physical Wall (and government border patrols with vast police powers), though, is the loose and metaphorical way that many on the populist right now talk about government walls and boundaries as if they’re legally and morally interchangeable with private walls and property lines, routinely calling pro-immigration activists hypocrites for living in homes with walls and property lines. Since when do purported believers in limited government think lines drawn in the sand by big government are the moral equal of the boundaries of a person’s own home? That’s commie thinking, not a good long-term basis for politics.

These oafs with their Wall fetish may have done more in two years to undermine the vital idea that private property is not public property than Karl Marx did in two centuries. The New Right must be destroyed.

Given the xenophobic motivations of most of the Wall-o-philes, it’s only natural that they want government's authority in this matter to extend all the way to Mars, or at least to result in the expropriation of some of Elon Musk’s property near the border in order to complete this public works boondoggle. The xenophobes’ wall just got 34 million miles higher, you might say, though it won’t keep out any Martians.

Now, I can understand the populists wanting to straighten out the inconsistent and porous way the border is enforced. But if it’s really spotty, inconsistent enforcement that rankles them and not shifting ethnic balances, I wonder how they feel about not Mexican but, yes, Russian anchor babies. Then again, given the left’s newfound and rabid animosity toward Russia, I might be even more alarmed to hear what the left thinks of Russian anchor babies than to hear the right weigh in.

Much of the immigration debate is, I admit, driven by the relatively rational concern that some immigrants, especially from certain regions, might be more likely than people from the rest of the globe to be criminals or terrorists. Fair enough, but you can see how that relatively targeted, narrow, individualistic concern morphs into sweeping, collectivist thinking when you hear things like Donald Trump Jr.’s famous summary of that worry: You’d reject a whole bowl of Skittles if you knew even one or two were poison.

True in the literal case of the Skittles, perhaps, but if we’re turning it into a metaphor for whole nationalities, have the anti-immigration populists stopped to consider how the existing U.S. population would fare by that standard? I’m pretty sure there are several million criminals in the existing U.S. population of 330 million people, so we’d better not take any chances. Arrest the whole country.

Or thank goodness we still have an individual rights-based legal system, many unelected judges, and protections like the ones outlined in the Constitution.