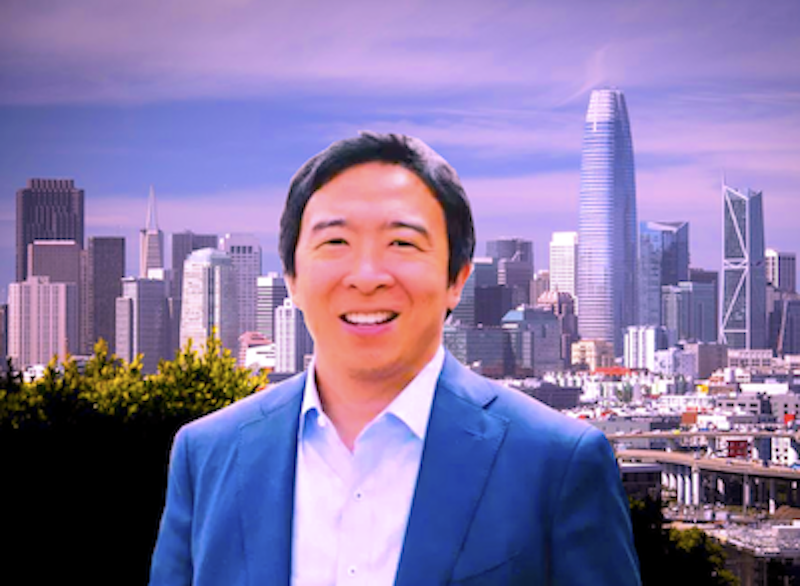 Democrat Andrew Yang’s odds of becoming president—or even the Democratic Party nominee—are long, but not for want of a long list of reasons why he claims to be fit for the Oval Office. Among his usual blue tribe political wish list of expanded access to healthcare, police reform and student loan forgiveness are some curiously niche progressive causes, which have only scratched the surface of national Democratic consciousness. How about putting the kibosh on circumcision: “I’m highly aligned with the [hilariously apt] intactivists,” Yang has stated, dissing the widely practiced medical act most men will never remember experiencing. “History will prove them even more correct.”

This isn’t the only issue putting distance between Yang’s vision and his competitors. Beyond those who’ve been circumcised due largely to tradition, his broadly utilitarian and technocratic worldview reps for those residing in the long tail of political identities that go overlooked in this age of full-throated identity politics. Like neuroatypicals. Yang has a plan to fund research into autism, inspired by his son, who’s reportedly on the spectrum. As Vice points out in an exhaustive look at what Yang has up his sleeve policy-wise, the 44-year-old techie has a plan to revitalize so-called dead malls, which should help make him a lock with the retro aesthetes who comprise the vaporwave vote.

Yang’s vantage point is that of the tech-savvy neoliberal Democrat, albeit with a 21st century twist. This puts him at odds with the more populist progressives who’re animated by the presidential campaigns of Bernie Sanders, Kamala Harris and Elizabeth Warren. These figures remain in thrall to certain 20th-century tropes that invoke themes of race, gender and political economy, often predicated on stopping “corporate greed.”

Medicare-for-all. Green New Deal. Single-payer health care. Reparations for slavery. Raising the federal minimum wage. Trust-busting. Any of these notions would’ve been easily understood by the electorate in the prior century, as they invoke our collective national memory and tried-and-true legislation. They were the stuff of very familiar talking points, and remain so.

But a Universal Basic Income? Or putting circumcision on the political map? Or providing banking services through the post office? The creation of a Trucking Czar? That’s weird stuff. But not soweird if you’re a denizen of California—especially northern California. (Yang himself is from New York, but his worldview is informed by experience in software and the startup sector.) Even his highlighting of autism, and the problems facing those diagnosed with it, can be linked to the peculiarities of Silicon Valley and other high IQ locales.

“In information-technology (IT) enclaves such as Silicon Valley, where hypersystemizers are more likely to meet, pair off and have children, the result is a higher incidence of autism,” observed Nature in 2011. “People who have progressed further in education tend to have children later in life, and at least some evidence suggests that older parents are at higher risk of having children with autism.”

Like cybersecurity guru and Internet of Things critic Bruce Schneier, Yang has proposed a Department of Technology, which would be tasked with helping ease Americans into the age of automation-induced unemployment, and more ominously, a permanent new Gilded Age wherein a mere warm body and a willingness to work won’t be enough to secure a livelihood. Not even close.

Within the so-called Grey Tribe or “rationalist community” that is Yang’s natural constituency—or at least his natural pool of advisors—this big picture concern implicating the nexus between human capital and actual capital is a persistent theme. From sociologist Daniel Bell to, well, The Bell Curve, a sober(ing) look into the nature of the knowledge economy, and its trajectory, is a major endeavor for our modern yet unofficial brain trust.

Brains are replacing brawn. And this brainy faction is here to stay, so it’ll have its say.

Though you’d never guess it, the epicenter of the rationalist community is... Berkeley. The same place that helped launch one of the most romantic strains of leftism in modern history is also home to those often charged with lacking an empathetic, spiritual and solidaristic core, and being little more than a fig leaf for a cold, dry and very male way of approaching the world. But this is a misperception. While the rationalist crowd does draw heavily on empiricism to advance its generally utilitarian worldview (it’s this fixation on statistics and policy above personal testimony and hero-villain storytelling that gives Yang a neoliberal “vibe,” pointed to by critics) it’s also responsible for advancing some of the most bleeding edge bleeding heart politics. The movement known as Effective Altruism (“EA”), inspired by animal rights activist Peter Springer, springs from this well.

Though Yang is the most 21st-century candidate in the 2020 presidential, he harkens back to the 1990s in at least one way, by evoking the notion of “digital divides.” The term, coined by Bill Clinton, spoke to the gap between the tech-capable and everyone else. Of course, Clinton held out hope that such a divide could be closed; Yang’s drive for a Universal Basic Income implicitly suggests it can’t be. Not everyone can “learn to code,” and that realization may be exactly why the comfortably in-the-know West Coast techies in Yang’s corner are backing him.

If the Yang Gang had their druthers, the idea of getting everyone to “up to code” would be rendered impossibly fanciful. On the other hand, the Singer-approved “impossible burger,” once the stuff of synthetic dreams, would become as ubiquitous as the self-driving car. And as extinct as the mohel. Such is the tech coast way.