The Watergate convict is more self-righteous than even Max Boot. 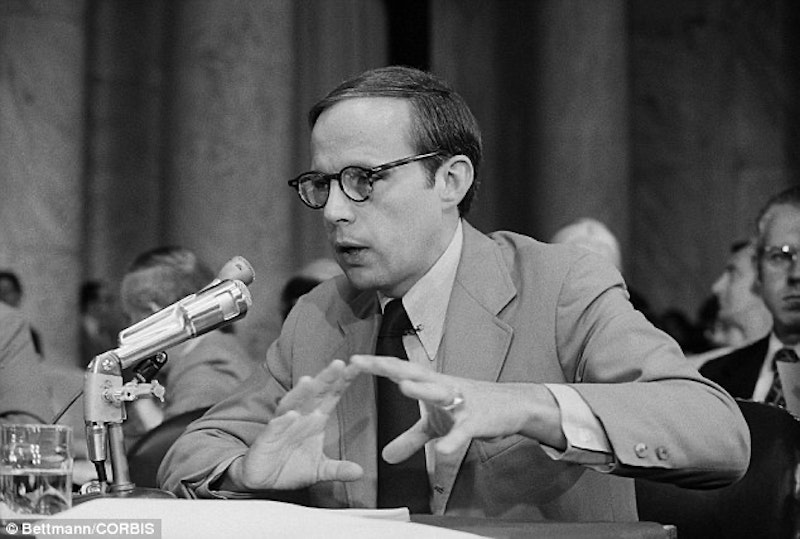 I’ve little patience with former conservatives who disavow long-held political views, often in service of selling a book or jacking up the price of speaking fees. Former Wall Street Journal editor Max Boot—who worked on Mitt Romney’s foreign policy team on the latter’s 2012 presidential run—is just the most prominent today, at least in the circles that care about such matters. Boot, like a lot neocons, became a #NeverTrumper—understandably put off by the current president’s remarkably unpleasant personality, plus the fact that Trump blew up the Beltway establishment that writers like Boot were used to—and repeatedly wears a (mock) hairshirt in public, begging for liberal forgiveness. “Thank you, and to whom shall I inscribe my book [The Corrosion of Conservatism: Why I Left the Right] to,” is more like it, but a buck’s a buck.

More irksome than Boot, however, by an urban mile, is John Dean, a central figure in the Watergate scandal, who served four months in jail—after snitching to officials about his former colleagues’ misdeeds—for his role in the cover-up. Now 80, Dean is still trying to rehabilitate himself, claiming that the actions of President George W. Bush were worse than anything Nixon did (his former boss is safely dead), and is now a leading Trump critic.

A recent tweet of Dean’s sums it up: “Best thing about spring, summer and fall is the return of baseball which allows millions of us to forget for several hours during games about the incompetent orange-faced jerk in the White House who demands so much attention. We all win with the distraction baseball provides!”

It could be that Dean’s a baseball fan—though I’ve never seen him mention it before—but he’s acting like a petulant college student calling Trump “the incompetent orange-faced jerk in the White House.” Never mind the lack of originality, you’d think that Dean, ostensibly a reasonably intelligent man, would offer his public more than locker-room taunts. The best that can be said about Dean is that he provided hours of entertainment in 1973 when he testified before the Senate Watergate Committee—all TV stations repeatedly panned to his hubba-hubba wife Maureen—which was meticulous, lengthy and the most substantial evidence against Nixon to that point. He was smarmy—the Michael Cohen of his day, although better educated—and if he ever cracked a smile, I missed it, but at 17 I couldn’t get enough of the first real reality show—the Loud family’s drama notwithstanding—and it was an outstanding diversion from my senior year in high school. Besides, Nixon was not a sympathetic figure, and for George McGovern fans like me it was an unforeseen gift. Naturally, I had money on the outcome, betting my history teacher—a rock-solid Nixon supporter, who, if he’s still with us, probably wears a MAGA cap—$10 (made in private) that the President was dead meat. By the time, Nixon resigned I was at college, but on a visit to see my mom, I stopped by the bar where Marty worked and he graciously paid off the wager.

Last week I mocked America’s Moral Arbiter (and career #MeToo perp Joe Biden defender) David Brooks for invoking the “public square” in his tortured defense—with no specifics—of reparations for African-Americans. Brooks is generally out of touch, as Norman Rockwell’s “public square”—the barbershop, butcher, bookstore, Greek coffee shop, and other independently-owned retail venues—mostly don’t exist anymore. Modern life and fill in the blanks. But scratch and scratch, and I suppose some conglomerate chains that’ve obliterated the unique qualities of cities and towns alike, are now a default outlet for friendly banter with people you see several times a week.

A few days ago I was the victim—is that word still allowed for older white men?—of a nasty experience at the CVS down the block from where I work. It was a simple chore: dropping off a prescription for a refill and I was second on line. The fellow in front of me, who had several medical documents spread out on the counter, and giving the pharmacist’s assistant some attitude, was a piece of work.

It was a lengthy process, not uncommon for a Monday, and I waited patiently, off to the left of the dawdler. I wasn’t guilty of the loud sighs or grunts that often occur during such a snafu, just minding my own business, when out of nowhere he turned to me and said, “You have to stand right behind me, not to my side!” I asked why—there were just two of us—and he insisted I was invading his “personal space,” a phrase I swear I hadn’t heard in about 30 years.

He accused me of spying on his documents, taking down numbers and all, which wasn’t the case. As if I gave a shit about the guy’s medical issues; besides, from that distance, even had I wanted to surreptitiously purloin his Social Security or phone number, my eyesight wouldn’t permit it.

Taking the Christian point of view, maybe Admiral Personal Space was having a rough day, but then he persisted. When I refused to move from my designated acreage of CVS carpet, he got less than a foot from my face, and said, “You just don’t understand, do you?” I replied that I’d no idea what he was talking about and why not just get on with his transaction, and give the lady behind the counter, who was rolling her eyes, some cooperation.

The verbal skirmish then amped up: “You’re the kind of ignorant person who gets shot on the street and then the news distorts what it was really all about.” I asked if he was “threatening me,” for CVS has plenty of security guards. (And for the record, I wasn’t packing.) He backed off; business completed, spat out a few barnyard epithets at me—the fucker—and walked out of the store.

I don’t care for random confrontations, but really, enough is enough. My kids were horrified when I told them about it later, saying, “Dad, why didn’t you just do what he asked and avoid trouble?” No. It was an issue of accountability, and I refused to be browbeaten by a man who may or may not have been hitting the Listerine too hard that morning.