Trump’s Contemptible in Many Ways, But He’s Not a Fascist

What political purpose did Omar’s comments about Trump serve? 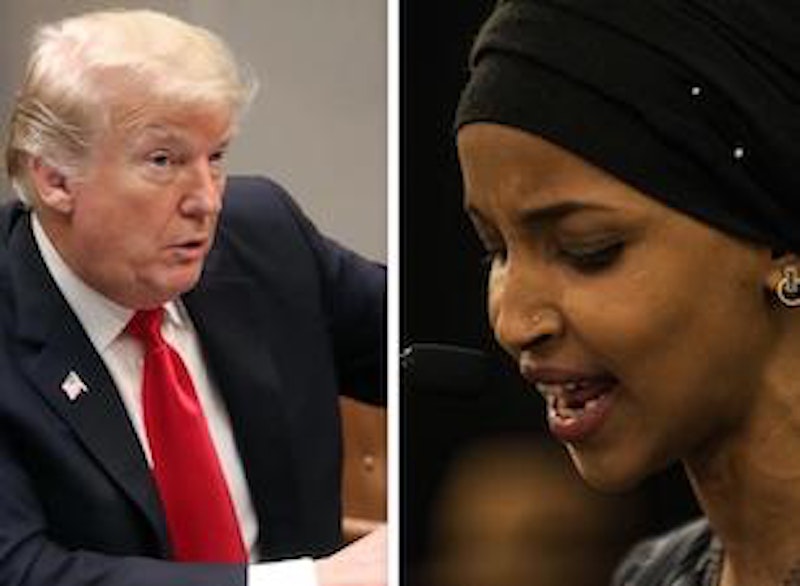 We’re often told that it’s vulgar and divisive to “politicize” tragedies, even when they’re avowedly political acts. A few days after the Christchurch massacre, Madeleine Kearns made this argument in National Review: “Whatever one thinks about the political ‘lessons to be learned’ from this incident—guns, immigration, technology—the first response should surely be to console the grieving and to bury the dead. Instead, politicians and journalists have been scrambling to win another battle in the culture wars.”

Politicization is inevitable after an event like Christchurch—there are simply too many politicians, activists, and other entrenched interests with powerful incentives to filter it through a political lens. Like many of her progressive colleagues, Rep. Ilhan Omar argues that Trump’s rhetoric can be linked directly to the massacre: “The reason I think that many of us knew that this was going to get worse is that we finally had a leader in the White House who publicly says Islam hates us, who fuels hate against Muslims, who thinks it is okay to speak about a faith and a whole community in a way that is dehumanizing, vilifying.”

While many of Trump’s comments about Muslims have been reprehensible, vague accusations about “fueling hate” or “creating a toxic environment” are, in this case, a cynical and misleading way to discredit him. Perhaps Brenton Harrison Tarrant wouldn’t have published a 17,000-word manifesto and broadcast the murder of 50 people if it wasn’t for something Trump did or said, but the evidence for this claim is next to nonexistent. And those who say otherwise aren’t just politicizing a tragedy—they’re exploiting it.

What if the Tree of Life synagogue massacre had taken place after the furor over Omar’s tweets and comments about Jews and Israel? Would it have been fair for her fellow lawmakers to hold her responsible for the actions of a deranged anti-Semite? Instead of standing amid the rubble and shouting, “You did this!” to your political opponents, the discussion should be about damage control—how can we prevent an act of terrorism from accomplishing its main objectives? This question is especially salient after Christchurch, as Tarrant’s explicit intent was to “balkanize the U.S. along political, cultural and, most importantly, racial lines.”

We’re ill-equipped to rationally respond to terrorism, which is one of the reasons why it’s so effective. When the Islamic State was still dominating the headlines a few years ago, more than half of Americans were “very or somewhat worried” that they or someone in their families would be a victim of terrorism. But in the decade and a half after 9/11, less than 200 Americans died in terror attacks. We know the emphasis on terrorism in the U.S. has been disproportionate, and this knowledge should help guide our response to events like Christchurch. The last thing a responsible politician should do is appeal to our irrational fears and tribal impulses instead of honestly presenting and discussing the facts.

What political purpose did Omar’s comments about Trump serve? Do American Muslims really need to be reassured that she supports them and despises the president? Will anyone sympathetic to Trump be convinced by the argument that he’s a white supremacist who inspires other white supremacists to slaughter Muslims? Her comments only increased hatred and hastened civic disintegration in the United States, which is exactly what Tarrant wanted.

Trump’s name appears just once in Tarrant’s 74-page manifesto. He asks himself: “Were/are you a supporter of Donald Trump?” and answers: “As a symbol of renewed white identity and common purpose? Sure. As a policy maker and leader? Dear god no.” This isn’t a declaration of ideological affinity—it’s an insult wrapped in an afterthought. If you’re going to blame Trump for the carnage in New Zealand, the burden’s on you to produce evidence for that claim – evidence beyond a fleeting (and half-contemptuous) reference. Anyone who’s actually taken the time to read the rest of the manifesto will see how preposterous it is to count Trump as one of the shooter’s formative influences—or even an influence at all.

Tarrant lists many causes of his radicalization, such as terrorism in Europe (particularly the death of 11-year-old Ebba Akerlund in a 2017 truck attack in Stockholm); the “nihilistic, hedonistic, individualistic insanity that has taken control of Western thought;” the inclusion of Turkey in NATO; his despair that a “internationalist, globalist, anti-white, ex-banker” won the French election; and the number of immigrants he’s encountered in European countries (particularly France). He also calls himself an “eco-fascist” and describes Oswald Mosley as the “person from history closest to my own beliefs.” He wrote: “For once, the person that will be called a fascist, is an actual fascist. I am sure the journalists will love that.”

Tarrant’s scornful of Trump as a “policy maker and leader” for the same reason he dismisses Marine Le Pen’s National Front as a “party of milquetoast civic nationalist boomers, completely incapable of creating real change and with no actual viable plan to save their nation.” Despite the rise of nativist, authoritarian parties and politicians in western countries, there’s still a conspicuous lack of actual fascists in the world. Does Trump advocate mass purges and executions? Does he want to “kill the invaders” and “kill the overpopulation”? Does he think the ongoing “white genocide” can only be arrested by the violent establishment of an ethno-state?

This should be a reminder to anyone who insists on calling Trump a fascist—you’ll know actual fascism when you see it. While Tarrant’s manifesto is drenched in meta-commentary and cryptic language, his core message is unambiguous: He’s obsessed with what he describes as the “crisis of mass immigration and sub-replacement fertility,” and thinks it can only be addressed by restoring “replacement fertility levels” and “intimidating and physically removing the invaders themselves.” These ideas were nourished and validated on white nationalist forums, which is why the manifesto contains so many references to the online subcultures that exist on sites like 8chan (such as the popular Navy Seal “copypasta”).

Everything from Tarrant’s fanaticism to the radicalization process he outlines in his manifesto to all the evidence we have about his immersion in white nationalist Internet culture demonstrates that Trump had nothing to do with his decision to murder 50 people in New Zealand.

It’s disturbing that Tarrant referred to Trump as a “symbol of renewed white identity and common purpose,” but it isn’t exactly a revelation. We’ve long known that some of Trump’s fans are white supremacists and neo-Nazis. We also know why—he describes immigrants as invaders, he called for a “complete and total shutdown of Muslims entering the country” (as well as the surveillance of mosques and the creation of a registry of American Muslims), he spent years denying that Barack Obama was a U.S. citizen, and so on. This is why it’s so tempting for Trump’s critics to link him to such a ghastly crime against one of the groups he has, in fact, vilified—and it’s why so many people will reflexively accept that the link exists. But we have to hold Trump accountable without dishonest, needlessly incendiary accusations, and we can’t resist white nationalist terrorism by misdiagnosing it.

The attempt to blame Trump for Christchurch obscures the true motives of the perpetrator, turns an atrocity into a crude political instrument, and contributes to the “destabilization and polarization” that terrorists like Tarrant are so desperate to provoke in western countries. Politicization is unavoidable, but let’s stop doing the work of our enemies for them.