“The Rev” offers lessons in how to escape a tawdry past with slick talk. 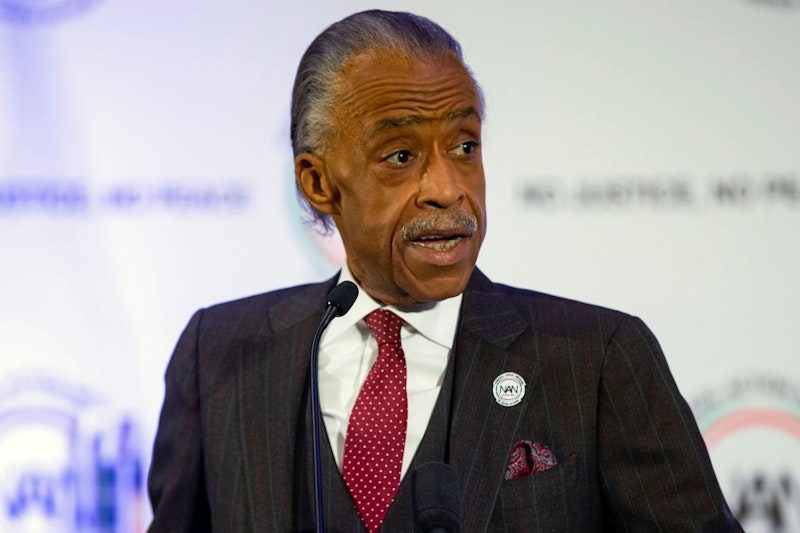 On April 3rd, presidential hopeful Beto O'Rourke paid a visit to Al Sharpton's National Action Network convention, where the reverend/activist/MSNBC regular asked him if he'd support legislation on establishing a commission to study reparations. The 46-year-old Texan, who hadn't schlepped to New York to deliver another “Sister Souljah moment” like Bill Clinton did in 1992, dutifully answered “yes.” With the charmed life he's led, failing upwards for decades and still taken seriously as a possible president (try to imagine Obama, the candidate, with a DUI and a slacker past), who was Beto to say no to the wishes of the Harlem kingmaker.

Sharpton already had a big win before Beto acquiesced by attracting a number of Democratic presidential candidates who'd just passed on the AIPAC convention that Barack Obama once frequented in a different time. For nearly three decades, political candidates, politicians, and major Hollywood players have made the journey to the NAN convention to kiss Sharpton's dollar-store ring. Many Jewish Democrats must’ve been chagrined this year, but more on that later.

Brooklyn-born Sharpton, an ordained minister at the age of 10 and former member of James Brown's entourage, is, like Donald Trump, an always-on-the-hustle product of one of New York City's many swamps. The loquacious Baptist preacher has an advantage over his fellow morality-challenged New Yorker, however, in that he hasn't run for president lately, meaning that his ample dirty laundry hasn't been put on display. The media's never been eager to air all his dirt anyway.

But both of these cynical grifters have an extra-strength political Teflon. Perhaps it's that New York City bravado thing—swagger hard enough and all's forgiven as long as you can deliver the goods. This, after all, is the city where an angry, psychopathic nerd named Bernard Goetz, the “Subway Vigilante,” bought himself an illegal gun and transformed himself into a hero in the eyes of many New Yorkers by gunning down four black teens on the 2 train.

Sharpton never pretended he was a Charles Bronson character, although he’s at least partially responsible for eight deaths. Perhaps it's all James Brown's fault. Sharpton has said that Soul Brother Number One was the person who taught him how to be a man, but by many accounts the hard-working singer/bandleader wasn't an admirable man when offstage. Trump's mentor, the Mephistopheles of the legal profession, Roy Cohn, schooled him in the dark arts, a field of study that the future president’s vacant soul and greed was well-suited to.

Sharpton established his fraudster bonafides by propelling himself into the national spotlight with his role in the Tawana Brawley scandal in 1987. When the 15-year-old African American falsely accused four white men of raping her, Sharpton was one of her advisors. A grand jury would find, over a year later, that the allegations were an elaborate hoax, but during that time racial tensions in the city neared the boiling point, the atmosphere “The Rev” thrives in.

In 1991, the track-suit-wearing, pompadoured activist helped stoke a three-day race riot in the Crown Heights section of Brooklyn that the MSM has always referred to as “racial violence” in order to make it sound two-sided, after one of the cars in the motorcade of an Orthodox Jewish leader accidentally struck two black boys, killing one and gravely injuring the other.

Sharpton helped spread the false rumor that a Hasidic ambulance crew had ignored the dying black child in order to transport the injured driver to the hospital. Three hours later, a marauding pack of about 30 yelling “Kill a Jew” fatally attacked Yankel Rosenbaum, a Jew from Australia, stabbing him four times. Sharpton had been yelling, "No justice, no peace!"

In 1995, a black Pentecostal Church, which owned a retail property on 125th St. in NYC asked a Jewish tenant who operated Freddie's Fashion Mart to evict his longtime subtenant, a black-owned record store called The Record Shack. Right on cue, Sharpton inserted himself by starting a months-long picketing campaign in Harlem. He told the protesters,"We will not stand by and allow them to move this brother so that some white interloper can expand his business."

The picketing concluded when one of them, brandishing a gun, walked into Freddy’s Fashion Mart and ordered all the black customers out before incinerating the place using paint thinner. Seven people died. Sharpton, as always, denied any personal responsibility for using incendiary language like “white interloper.”

Sharpton, the man Democratic presidential candidates must genuflect before, told a Keane College audience in 1994, “We taught philosophy and astrology [sic] and mathematics before Socrates and them Greek homos ever got around to it.” You have to wonder what his many black fans would say if they knew he was a paid FBI informant for years. Rats aren't too popular in Harlem, but Al Sharpton, the Three-card Monte dealer of civil rights leaders, has always been able to outrun his past.