The media’s preoccupation with the old hack is… predictable. 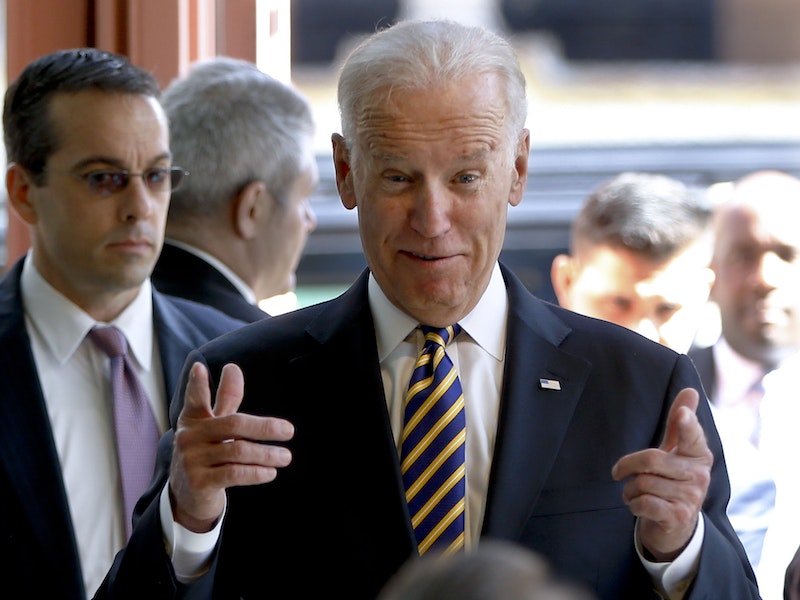 On the occasion of Joe Biden’s death—10, 15 years from now—is there any doubt that he’ll be given the “national treasure” treatment accorded to D.C. deity John McCain last summer? The reverence—and rivers of tears!—that gushed from political commentators about McCain was putrid, considering he was a wishy-washy hack Senator whose only calling card was his captivity as a Vietnam War prisoner. Yet the testimonials were just three or four steps behind Abraham Lincoln.

Biden’s an empty suit—more Chester A. Arthur—who has no business contemplating a presidential run in modern America, but he’s got the power narcotic in his veins and our abysmal mainstream media is egging him on. I’m a spectator for the 2020 race—can’t support either Trump or any of the so-far announced Democratic candidates—although I do have a $20 bet with my two sons that Biden will come to his senses and, “with great regret” give up the dream that’s energized him since he was 10 years old. Supposedly, he’ll make up his mind after Easter, and for strictly sporting reasons, I want those Old Hickory’s, since Biden at war with Kamala Harris, Mayor Pete, Elizabeth Warren, the ADHD guy from Texas and Bernie Sanders will be a lot of fun to watch and read about.

But, c’mon. Hasn’t Biden supplied the How-Not-to-Run-For-President manual since he was forced to abort his 1988 run after it was revealed he plagiarized the words of the unlamented UK Labour Leader Neil Kinnock in 1987? Biden’s baggage is so prodigious that it weighs nearly the size of Delaware; and the gaffe-prone former Vice President—fulfilling John Nance Garner’s pronouncement of that office’s worth—is guaranteed to keep adding to the list. If you’re a Democrat, how can you support a guy who presided over the Clarence Thomas/Anita Hill hearings in 1991 (with “liberal lion” Teddy Kennedy conspicuously silent during those weeks)? And for sensible Americans, Biden’s endorsement of Kennedy’s character assassination of Robert Bork in 1987, is troubling. A reminder of what Teddy said: “Robert Bork’s America is a land in which women would be forced into back-alley abortions, blacks would sit at segregated lunch counters, rogue police could break down citizens’ doors in midnight raids…”

And if you’re a modern Democrat, how can you condone the growing list of women who’ve complained Biden was too frisky in their company—Christ, “frisky” is as bad a euphemism as The New York Times’ “tactile campaigning” for his unsolicited grabbing asses and kissing, my apologies—and pretend it doesn’t matter? Al Franken must be pissed.

There’s Biden’s initial pro-Iraq war stance, his see-no-evil take on the Clinton/Bush acceptance of shady default swaps that helped lead to the 2008 crash (not surprising, since Biden’s Delaware is a banking tax haven), the lack of organization that surrounds any Biden campaign, and on a lighter note, those ridiculous hair plugs he wore years ago that were very Trump-like, except done on the cheap (I reiterate that Trump would be smart to show up at the first debate in the fall of 2020 with a shaved head). And, not his fault, but Biden’s son Hunter ditching his wife and cavorting with his late brother’s widow is on the tawdry side, although a smart consultant (which Biden hasn’t hired) could turn that into a “We’re a normal American family, warts and all” plus.

In a sincere, if strange, column from Peggy Noonan last week in The Wall Street Journal, the former GOP speechwriter, perhaps feeling nostalgic, implored Biden not to run, that he’d be eaten alive, saying young reporters, “culture cops,” will relish “beating people like you the nightstick of their wokeness.” Noonan presents Biden as a good-hearted throwback to the days when Democrats and Republicans put aside their differences after six p.m., which is pretty much nonsense. At least she didn’t repeat the old chestnut of Tip O’Neill and Ronald Reagan occasionally sharing a convivial nighttime cocktail after sparring all day.

As other writers have noted, the myth of 20th-century “Democratic Liberalism,” where Party members mouthed the words from the same book of FDR and Woody Guthrie hymns is mostly false. In 1968, Gene McCarthy and Bobby Kennedy hated one another, Hubert Humphrey was laughed at, and everyone in the country despised LBJ. Four years later, the honorable—too much for his own good—George McGovern was hobbled by a terrible, on-the-fly campaign staff, and the sniping, especially after the Eagleton fiasco, was not collegial.

Jimmy Carter, even though endorsed by most Democrats in ’76, was kind of a joke, and then Teddy Kennedy fucked him over by running in the 1980 Democratic primaries, and refused to shake his hand at the convention. Fritz Mondale got off a classic quip in a debate with Gary Hart in ‘84—cribbing from the most popular TV commercial of the day, saying, “Where’s the beef?”—and though Mondale was congenial, Hart was always prickly and sanctimonious. Later, in 1992, Bill Clinton threatened to punch Jerry Brown in the nose during a debate (which is what Jeb Bush should’ve done to Trump in early-2016), and most remember the vitriol between Hillary Clinton and Barack Obama is still bruited about.

I’m still fairly certain Biden won’t run, but with Bernie Sanders going a little bit nuts with his championship of prisoners’ voting rights at the same time going semi-Trump on immigration, Warren’s inability to gain traction, and growing skepticism about Mayor Pete (and his reading list), the 76-year-old Biden just might make one more political mistake.