Conflating Conservatives With Alt-Right is a Mistake

The Economist gets slapped down. 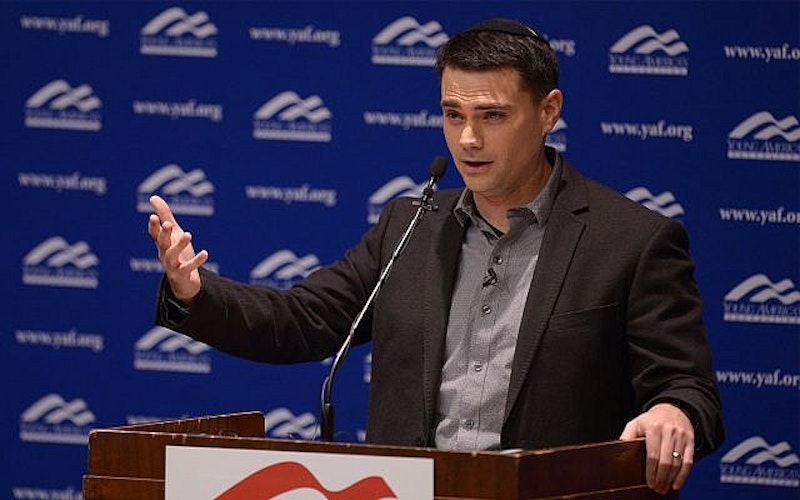 At the end of March, The Economist ran an interview it conducted with conservative firebrand Ben Shapiro, who was described, in a stunning piece of journalistic malfeasance, as an “alt-right sage” and “a pop idol of the alt-right.” That came as news to the contentious podcast host, who hires security to protect him from the alt-right when he goes to shul on Sunday.

As an Orthodox Jew, Shapiro's about as likely as Maxine Waters to be a member of that radical fringe group. He didn't even vote for Trump, partially because the candidate’s many winks to the alt-right. Had The Economist done due diligence, it would’ve found that those people enjoy nothing more a Holocaust joke.

The British magazine's defamatory misappellation can be attributed to either malice or astounding incompetence. It's hard to believe that publication wouldn't realize it’d be forced, under legal threat, to apologize (it's decided to call him a “radical conservative”), so I'll give them the benefit of the doubt and go with the latter. To plenty of left-of-center people on social media, however, The Economist’s category error was nothing to apologize for—it was the truth. That's a testament to both how much that group hates Shapiro.

Substantial portions of the Left believe that there's a spectrum of conservatism that begins with someone like Mitt Romney and travels through Ted Cruz on the way to its outermost point, the alt-right. This is a fundamental mistake. The alt-right, divorced from many traditional principles of conservatism, occupies its own parallel political spectrum, even though Donald Trump has all but welcomed them into his base.

Shapiro's conservative, but that still doesn't put him in white supremacist territory. The alt-right believes that Western Civilization is a product of the white race, not the Enlightenment and Judeo-Christian principles. One tenet the alt-right does espouse is known as “race realism,” formerly known as scientific racism, which is the pseudo-scientific belief that certain races are inferior to whites. The slickest proponents of this idea, such as Richard Spencer, Stefan Molyneux, and Jared Taylor are convinced that many Americans, including liberals, share this view but shy away from it due to political correctness. They reject American democracy’s commitment to providing equality to everyone regardless of race, color, or creed.

Smooth hucksters like Spencer, Molyneux, and Taylor are the presentable public faces of the alt-right, but the vast majority of the movement resides in the shadows of the Internet, cloaked in anonymity because of the social consequences of being identified. A bunch of them scurried out of the woodwork like cockroaches in Charlottesville in the summer of 2017, when they could be heard shouting, “Jews will not replace us.” That phrase is associated with the term “white genocide,” a conspiracy theory claiming the diversity is a genocidal scam plotted by Jewish neoliberals such as George Soros. The ostensible plan is to import, via immigration, hoards of dark-skinned fast breeders who’ll eventually marginalize whites to minority status.

Charlottesville was supposed to be a coming out party for the-alt right, which had already gotten a major boost from Hillary Clinton when she mentioned them by name during her presidential campaign. At such festivities, you're supposed to wear nice clothes and be on your best behavior, but the alt-right's not capable of that. Their debut bombed and the movement splintered. How often do you even hear Richard Spencer’s name any more?

Dan O’Sullivan, a political propagandist whose Twitter profile lists him as a contributor to Rolling Stone, Vice and Jacobin, reacted to the The Economist’s apology to Shapiro, which he called “an example of liberal capitalists accommodating fascism,” in a way guaranteed to endear him to his leftist disciples. He tweeted “So Ben Shapiro incites all of his followers and viewers to believe every Muslim is an Islamic extremist on par with ISIS, that any Muslim immigrant in your community is a threat, that liberals are making the problem worse, that the consequences will be devastating...and that's it.”

I’m not a fan, but I've listened to every single one of Shapiro's podcasts for over two years now. He's never said anything equating regular Muslims with ISIS or being a threat to their community. Shapiro recognizes radical Islamists as a distinct group. O’Sullivan, who's never listened to one Shapiro podcast, is recognized as a journalist, but his followers don't want journalism from him—they just want their opinions confirmed, and he comes through every time.

That a respected publication such as The Economist would allow itself to look so foolish is bad for the media; so is the current tendency of partisans to falsely accuse conservatives, alternative thinkers, and a media outlet like Quillette, of alt-right affiliation as a political weapon. That's modern-day McCarthyism, and we've already seen what that leads to. As Shapiro put it, the way to elevate the alt-right to power is to mainstream them by conflating them with regular conservatives and actual enemies of the alt-right.