The popular Indiana governor, with a zero charisma meter, might emerge as Barack Obama’s toughest opponent. 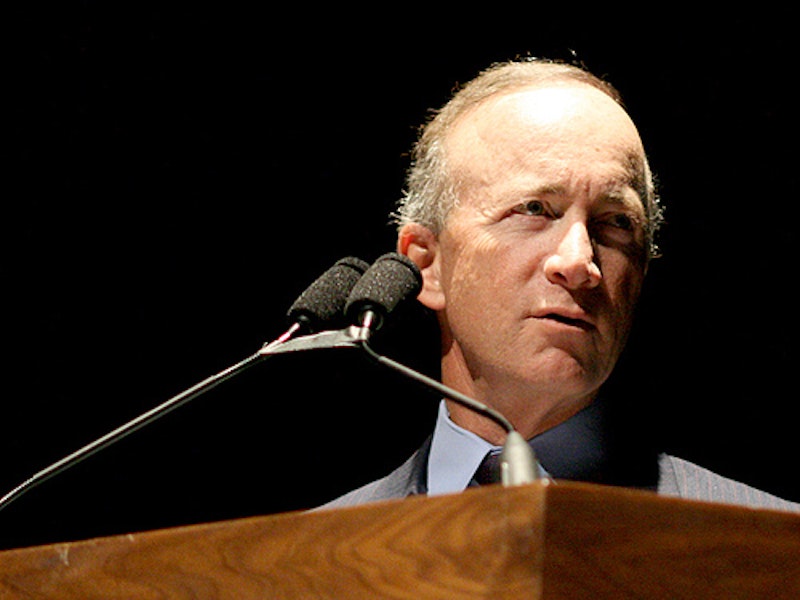 Back in January I wrote an essay lamenting the lack of a credible Republican national leader, a man or woman who’d take the initiative to barnstorm across the country for GOP Congressional candidates, and not incidentally collect I.O.U’s for a 2012 challenge to President Obama. Newt Gingrich was brilliant in this capacity in 1994, and had his alternating bouts of bluster and timidity not done him in, it’s possible he could’ve displaced the tired Bob Dole in the ’96 election. Richard Nixon, ignoring his press obits, and public image as a political laughing-stock, virtually guaranteed his ’68 nomination by successfully traversing the country in ‘66, pressing flesh before audiences tiny and large, and emerged as the main beneficiary of the GOP’s comeback just two years after LBJ’s landslide.

Right now, as in January, there is no titular GOP leader, and while the risible Sarah Palin, doomed-to-lose Mitt Romney and Mr. Novelty, aka Rep. Ron Paul, lead in the weekly polls as potential candidates, that’s just a lot of meaningless static. And, in fact, I’ve reconsidered the belief that such a leader is even necessary before November’s midterms—although RNC chairman Michael Steele continues to be an embarrassment—since too much is politically uncertain right now. It’s probably better for a possible candidate like South Dakota Sen. John Thune (whom I continue to think has the best chance to upset Obama two years from now) to run up as large a margin as possible in his reelection bid and take stock the week after Election Day and figure out how to best harness what still looks to be a major comeback for Republicans in every region of the country. At this point, I don’t see a GOP takeover of the House, and definitely not the Senate, but Obama’s majorities will be significantly reduced, and the can’t-see-beyond-their-nose media will instantly seize on a newly besieged president, which will bring Republicans like Thune and Indiana Gov. Mitch Daniels out of the shadows.

Although it’s clear that a competitive Republican presidential nominee needn’t possess the oratorical skills of Obama, but rather a plain-spoken and articulate economic and foreign policy platform, I’d dismissed Daniels out of hand for a couple of reasons. One, even though much of the electorate will be drawn to an “anti-Obama,” Daniels appeared just too much of a nebbish to make a splash in the early and deciding primaries. Two, his short stint—before successfully running for governor in Indiana in 2004, and sweeping to reelection four years later in a toxic GOP climate—as President Bush’s OMB director seemed like an immediate disqualifier. Just as the popular conservative Jeb Bush will never be able to run for president because of his last name, any public figure identified with his brother is probably dead meat on the national stage. (It may be that Jeb Bush, who, by the time of President Bush’s inevitable historical revision, will be too old to capitalize, may be sublimating his own dashed ambitions in favor of his sons George P. Bush and Jeb, Jr., a few decades down the road.)

It wasn’t until I read Andrew Ferguson’s lengthy Weekly Standard article, “Ride Along With Mitch,” an engaging (and eye-opening) account of his recent tag-a-long with the hyper, motorcycle-riding Daniels as he made his rounds at the coffee shops, awful-sounding restaurants, chain stores, county fairs and VFW meetings all over Indiana, that his nomination actually seemed possible. (Daniels, like Thune, has issued the standard denial of interest in Obama’s job, giving a pat I’m-Just-Concentrating-On-Serving-My-State answer to inquisitive political reporters.) Ferguson’s piece was captivating, and not just because he’s among the three or four wittiest working journalists today; it was Daniels himself, a self-proclaimed penny-pincher, who did the heavy lifting, articulating exactly the kind of fiscal severity that’s necessary for the country right now, the kind of mindset that gives liberal Democrats a bad case of shingles.

In short, Daniels is small business champion, anti-tax, immigrant-friendly, no friend of unions, a budget-cutter, an advocate of massive entitlement reform (he thinks that Bush’s attempt at partial Social Security privatization was too meek) and a fervent foe of the public education bureaucracy. He’s pro-life but sensibly—at least to economic conservatives, libertarians and independents—puts that on the back burner. He won’t appeal to the left, as this remark to Ferguson on climate change (he’s “agnostic” on the issue) demonstrates: “I don’t know if the CO2 zealots are right. But I don’t care, because we can’t afford to do what they want to do. Unless you want to go broke, in which case the world isn’t going to be any greener. Poor nations are never green.”

Even Michael Gerson, a former Bush speechwriter and a “moral values” stickler, allowed that Daniels has a shot, writing in The Washington Post: “If responsibility and austerity are now sexy, Daniels and New Jersey Gov. Chris Christie are centerfolds … It is difficult to imagine Daniels’ rejection of uplift, ideology and activism appealing to the country at most times. But maybe, at this particular time, we are a nation in need of fewer messiahs and more OMB directors.”

The description of Daniels in Ferguson’s article makes him appear more like Sheriff Andy Taylor of Mayberry rather than a governor who’s attracting behind-the-scenes support from powerful (and wealthy) conservatives. Daniels pokes his head into local restaurants, pours himself a cup of coffee, chats with pony-tailed roofers, and raves about the state’s pork tenderloins, butterscotch milkshakes and deep-fried candy bars. He’s self-deprecating (he’s 5’7”, with thinning hair), but rigorous in cutting the fat from Indiana’s budget, a stance that was unpopular during his first term, but has since earned him a reputation as a genial man who takes his job seriously.

But can Daniels actually win should he decide to run for president? I asked Ferguson that question last week, and he replied in an email that if Obama’s popularity ratings continue to suffer and the country’s mood remains sour in 2012, then he’d have as good a chance as any Republican, adding that the odds of unseating an incumbent president are slim.

He elaborated: “He’d be extremely popular in New Hampshire, with his gift for retail politics and reputation for thrift. I assume he’ll skip Iowa because he doesn’t want to tangle with the Christian right out there. If he wins NH, blows out South Carolina, it’s his to lose, right? That’s the usual game plan. And with his network of pals, money will be falling from the sky. Then comes the general election, of course, and I see him as he strides toward the middle of the stage to sake hands with Obama before the first debate and comes up to the president’s navel. Election over.”

That’s a bald assessment that, at least right now, makes sense. And given the importance of a candidate who’s telegenic (tall, full head of hair) that have prevailed since JFK’s election in 1960, I won’t put any money down on Daniels any time soon. Still, considering how vastly the media has changed in the past decade—with more to come by 2012—it’s certainly possible that old rules no longer apply. Besides, if Daniels (or Thune) can knock out self-aggrandizing politician/celebrities like Sarah Palin off the national stage, that’s not a small public service.