He's So Silly, Oh So Silly

Lloyd Grove, moonlighting for the lightweight Daily Beast, wonders whether "Brand Obama" will resemble an oil drenched pelican if he can't perform damage control in the gulf. 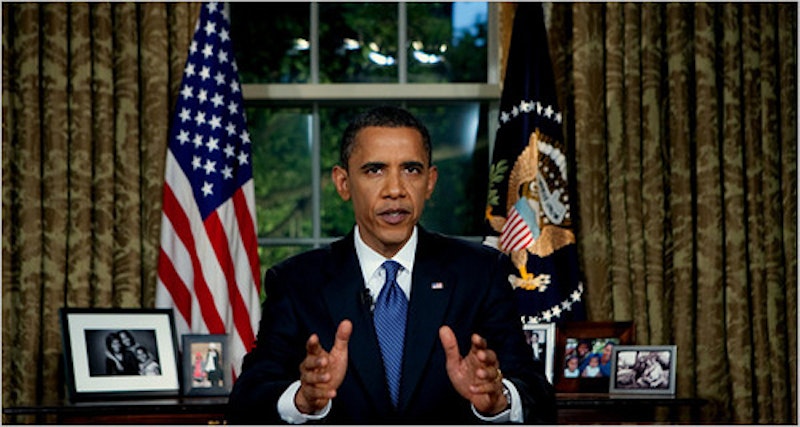 Not so long ago the period between mid-July and Labor Day—when politicians and journalists fled steamy Washington, D.C.—was routinely called the “silly season.” So, for example, the three major television networks would beat a “human interest”  story into the ground; a missing white child, the misfortunes of a lottery winner, a 12-year-old math genius from Phoenix entering a prestigious university or an inconsequential sex scandal involving a celebrity. In the 21st century, of course, it’s “silly season” all year round, and today there’s no better example than an absolutely absurd story by Lloyd Grove posted on The Daily Beast.

Writing about President Obama’s  “tarnished brand,” buttressed by lengthy quotes from a Harvard Business School marketing professor—a “branding” expert—Grove worries that the Gulf spill threatens to upend Obama’s popularity, which was sinking before the April explosion, and imperil Democrats in the November midterm elections. What a novel hypothesis! Never mind that Republicans were poised for electoral pick-ups prior to BP’s infamous turn of events—a first-term president almost always suffers Congressional losses, and they’re worse if the economy stinks—and that Obama, like any Oval Office occupant, has to negotiate problems he didn’t imagine as a candidate.

Grove, relying heavily on his Harvard source, John A. Quelch, writes: “Two months after BP’s Deepwater Horizon oil rig exploded and sank to the bottom of the Gulf of Mexico, the spill gushes apace on live television, a mile below the ocean’s surface. Could that alarming image be a metaphor for President Obama’s submerged political capital draining away at warp speed?” (A look at Real Clear Politics’ catalog of Obama approval ratings this year contradicts Grove but facts are silly things, right?)

I suppose every aspect of American life today develops at “warp speed,” and Obama has drawn criticism, some of it fair, most of it not, for his reaction to the disaster, but Grove is daft (or spinning out a column in three minutes for Tina Brown’s Daily Beast, a repository for “name” journalists to post their sloppy seconds) if he believes that the country’s voters will hold the President responsible for repairing the damage caused by BP. What’s he supposed to do, put on diver’s gear and plug a finger in the gusher? I guess some naïve voters really believed that the eloquent Obama, circa 2008, was an actual Superman, but there’s not a lot he can do. I don’t care for Obama using the spill to further hector and demagogue the private sector, but other than that there’s little reason to criticize his response to a situation that’s beyond his control.

The idea of “branding” is hardly new: during the 1960 election between JFK and Nixon some Big Thinkers lamented that the candidates (mostly because more Americans owned televisions) were sold like laundry detergent. That Grove, 50 years later, is saying that if the gusher isn’t capped by November it will “indelibly stain Brand Obama and taint his fellow Democrats going into the 2010 midterms,” strikes me as both obvious and lazy. Sure, a protracted Gulf crisis, with the perception the administration isn’t doing enough to minimize the damage, won’t help Democrats, but the economy still dwarfs any other issue. If there’s a general feeling that the worst of the recession is over—which is anybody’s guess right now—Obama’s party won’t suffer so much at the polls. On the other hand, if unemployment remains high, and layoffs and bankruptcies dominate the non-silly news, Democrats will get creamed. And it’ll have nothing whatsoever to do with “branding.”