Why is Gov. Martin O’Malley Struggling in Maryland?

In a volatile political year, incumbent Martin O’Malley and opponent Robert Ehrlich both have long paper trails. It’s O’Malley’s election to lose, but neither candidate is in top form. 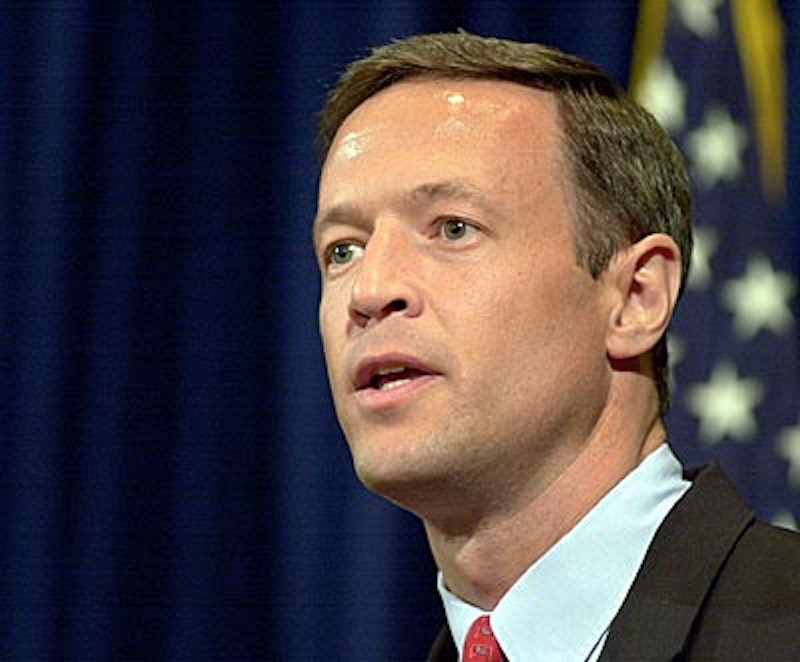 The campaign of Maryland Gov. Martin O’Malley (D) is exhibiting very strange behavior for an incumbent with four years of experience and a respectable record on his resume. It’s a campaign that should be on cruise control rather than trying to find a comfortable stride.

This is not to suggest that the candidacy of Republican Robert L. Ehrlich Jr. can pass the election year stress test. Both campaigns appear, at this point, to be meandering in search of a theme rather than demonstrating a cohesive plan with a confident tactic and tone that says victory.

The incumbent customarily uses the props and perks of the office to extend his campaign on the theory that good government is good politics and reinforces the job performance with positive supporting campaign commercials.

Most polling reveals the rematch between O’Malley and Ehrlich, the Republican he ejected in 2006, to be unusually tight—O’Malley eight points up in the most recent Washington Post poll and dead even at 45 percent in the Rasmussen poll (the rap on Rasmussen’s polling is that it tilts Republican). That dynamic is reminiscent of the Glendening-Sauerbrey campaigns of the 90s when they ran close-to-even until the final weeks when the election broke wide open for Glendening, at least in ‘98.

But there’s another subliminal force at work in this election as well: O’Malley should be loved by the electorate and he’s not. O’Malley is unliked—not disliked—but unliked, difficult to warm up to despite his rock star shtick and Irish good looks. Call it the personality factor of the election, or arrogance, but it’s the airborne message that’s heard most among voters. It can be lethal. And while Democrats outnumber Republicans two-one, there are now nearly 600,000 registered independents that can make a difference although in Maryland they tend to vote Democratic.

So it is fair to conclude that the O’Malley campaign is taking no chances. It is highly unusual for an incumbent to sponsor attack ads even before the opponent has filed his certificate of candidacy. But in the case of Ehrlich, O’Malley is tucking it to him right where it hurts—on his own radio station during his own radio show. And by all accounts, Ehrlich was rattled by the O’Malley commercial linking him, fairly or unfairly, to big oil firms and indirectly in the minds of the voters to the BP oil gusher in the Gulf of Mexico.

This craziness occurred after the state Democratic party, by extension part of O’Malley’s campaign, protested WBAL Radio’s allowing of Ehrlich and his wife, Kendall, to continue their Saturday morning show until Ehrlich actually files. He abandoned the show last weekend and handed the microphone over to Kendall and the Ehrlich-friendly audience. Even Maryland’s Democratic attorney general, Douglas F. Gansler, disagreed with the party’s claim and mercifully shot down the ill-conceived idea.

In another bodacious example of spirited intemperance, the Democratic party complained to the State Board of Elections that Ehrlich’s job as head of the Baltimore office of Womble, Carlyle, Sandridge & Rice, a South Carolina law firm, constituted an in-kind campaign contribution because the use of the office was an off-season campaign headquarters in disguise. And once again late last week, the O’Malley campaign released a commercial claiming Ehrlich has acted as a lobbyist for various interests and once again Ehrlich fired back by denying it.

And consider the latest spitball fling over the stranded MARC train wherein Ehrlich blamed O’Malley for populating the Department of Transportation with cronies and hacks. Get real, Bobby. Nobody angered constituents more than your own secretary of transportation, Robert Flannigan. As for hacks, how about Joseph Stephan, Ehrlich’s personal button man, and the ice dancer, Gregory Maddalone, who was assigned to a $75,000 job in the transportation department without portfolio or qualifications. The trouble is that both candidates for governor have long and winding paper trails.

Much of the noise is standard campaign bluster. But a confident candidate and a campaign with a secure theme would not be engaging in such nonsense at this stage unless there’s a broader madness to the method. To be sure, the electorate is in one of its cyclical snits and nothing can be taken for granted by candidates when the voters are so unpredictable.

It is axiomatic in politics that rule number one is to avoid allowing an opponent to frame the debate. And that may be part of the mischief that O’Malley is up to. He’s lunging at Ehrlich before the Republican can get a grip on his throat. A second element is to avoid letting the opponent sneak up, and by accelerating the attack on Ehrlich, O’Malley is keeping him off balance and far and wide of the story line of his campaign. And hold your breath. Soon the opposition research will kick in.

O’Malley’s candidacy depends on a solid turnout of black voters, who make up 33 percent of Maryland’s population, the largest outside the Deep South, and about 40 percent of the Democratic vote. So why, it is fair to ask, if the story is true (which it probably isn’t), would O’Malley openly antagonize Baltimore State’s Attorney Patricia Jessamy (D) as some have suggested he has, by soliciting attorney Greg Bernstein to run against her?

In 2002, for example, Jessamy was inching toward supporting Ehrlich after several very public feuds with O’Malley. O’Malley, however, praised Jessamy for her hard work, increased her salary to $225,000, and Jessamy quietly disappeared. And while President Barack Obama’s standing in the polls continues to shrink, he no doubt will be a welcome presence in Maryland and at O’Malley’s side during the general election campaign.

Ehrlich’s campaign, by the same measure, is offering no better example of a well-tuned operation. Take, for instance, the Republican party’s hollow rap on O’Malley. The GOP’s human trumpets claimed that O’Malley was “strong-arming” state employees into contributing to his campaign. They failed to back up the complaint except for a single example of a campaign e-mail directed to a state employee’s work address.

So far, Ehrlich has given little substantive reason to replace O’Malley. He has promised to ease the way for more charter schools, create five different study commissions to improve the business climate in Maryland, provide greater state subsidies for the film industry all at the same time he promises to repeal O’Malley’s one percent increase in the sales tax. How’s he going to replace the $600 million, hold a bake sale?

There are others who claim that Ehrlich’s fundraisers are having difficulty raising money this time around as compared to the nearly $20 million he collected in 2006 in the first contest with O’Malley. Money tends to magically find its way to incumbents, and Ehrlich is no longer governor with a grab-bag of political favors.

O’Malley and his understudy, Lt. Gov. Anthony Brown, have already filed their candidacies. The filing deadline is July 6, and the only suspense remaining is who Ehrlich will choose as a running-mate. Does the one-day headline really matter? People don’t vote for second bananas. Nonetheless, under Maryland law, candidates for governor and lieutenant governor must file and run stapled together.

So far, neither O’Malley nor Ehrlich seems sure-footed about his candidacy and a formula for winning in a volatile election year. It’s almost like two dogs circling and sniffing, trying to decide whether to make love or war. With these two testosterone-driven candidates, the choice will certainly be war.