John Thune is the GOP’s Future

Republicans haven’t demonstrated much political agility in the past six years, but they’ve got a potential star in South Dakota’s Sen. Thune. 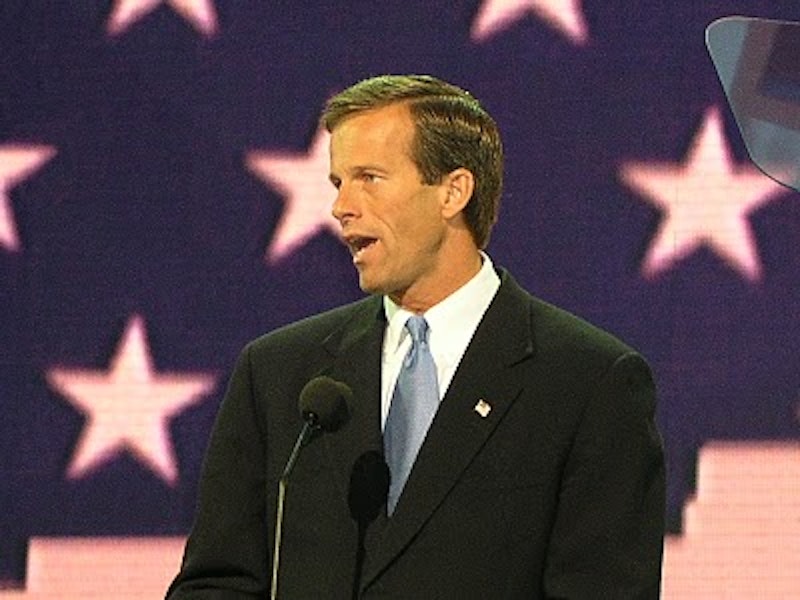 Republican elected officials and consultants are clucking around the clock—no longer ducking reporters—as the new decade gets under way, anticipating major gains in Congress after the midterm elections this November. The guarded optimism in public and euphoria in private is understandable after the GOP was decimated in the ’06 and ’08 contests; aside from the current view that at least 20 House Democrats will fall, and perhaps four or five senators (including white-skinned Majority Leader Harry Reid), there’s even talk that Republican Scott Brown might upset Martha Coakley in the Jan. 19 senate election in Massachusetts. I’ll believe that when I see it, but if Brown does fill Teddy Kennedy’s seat, President Obama’s health care legislation will likely be scuttled.

The Weekly Standard’s Fred Barnes, in the magazine’s current cover story, “Unhappy New Year… for Democrats,” captures this mood in the first paragraph of his story: “The good news for Republicans in 2010 is they’re ahead in 6 races for Senate seats now held by Democrats and lead or are tied in 6 open seats where Republicans are retiring… The bad news? There is no bad news.”

Perhaps. As someone who’d be delighted if the insufferably imperious House Speaker Nancy Pelosi’s power is severely diminished—at this point, almost no one, save Barnes, is speculating on the record that the GOP might actually regain a majority in the House—and the landscape from just a year ago, when Obama was declared President of the World, would once again turn over, that’d be a satisfying dipsy doodle.

Maybe Republicans have learned that running as “moral values” candidates is dumb and divisive, and best left to the sideshow irritants such as Glenn Beck and Sarah Palin. If GOP candidates follow the playbook of Bob McDonnell, who won Virginia’s gubernatorial race in November by tamping down his socially conservative views and campaigning almost exclusively on the sour economy—currently the only real issue that concerns most Americans—Nov. 2 will indeed be a sort of resurrection for a party that short-sighted liberal columnists and bloggers, failing to recognize the cycles of politics, left for dead after Obama trounced the past-expiration date John McCain in 2008.

Yet the Republican Party has a major problem that its members, too busy fantasizing about a redux of 1994, when Newt Gingrich led a GOP takeover of Congress that left President Bill Clinton uncharacteristically mute (reduced in early ’95 to telling the nation he was still “relevant”), don’t want to address. The simple fact is that Republicans aren’t really active participants in their turnaround, but rather a default option for voters who aren’t happy with Obama and the Democrats. There’s no national GOP leader who’s rallying support for candidates across the country; last year’s exaggeration that entertainer Rush Limbaugh was the go-to guy for Republicans was absurd, but it did point out the painful lack of serious men and women in the Party who might vie for the 2012 GOP nomination to face Obama. The Republican “bench,” as it’s referred to, is as thin as that of the Pittsburgh Pirates.

My own track record for identifying presidential candidates is as spotty as anyone else in the racket—as a young man of 21, I was certain the long-forgotten Fred Harris would defeat Jimmy Carter in the ’76 New Hampshire Democratic primary—but I can’t understand why South Dakota’s Sen. John Thune isn’t accorded star status by the Republican National Committee. Perhaps it’s fault of Michael Steele, the gaffe-prone RNC chief (when in doubt, blame Steele) that potential major donors aren’t schmoozing Thune, but if there’s another candidate who could wage a competitive race with Obama in three years he or she has escaped my attention. Thune, for his part, is taking the conventional public stance of saying he’s concentrating on his reelection campaign this fall (which, barring unforeseen circumstances, such as a Mark Sanford/John Edwards embarrassment, ought to be a cinch).

And while he’s made a few who-knows appearances in Iowa, with the exception of a puff column by David Brooks in the Nov. 13 New York Times and a roundup of dark horse GOP candidates by Tom Bevan and Mike Memoli on Real Clear Politics on Nov. 17, Thune has received scant notice from the national political media. (And, in this era of mass media transformation, there’s still no dearth of “horse race” key-punchers and tweeters.)

Thune fulfills most of the requirements of a legitimate Republican opponent to Obama: He’s tall and handsome, young (49), defeated then-Senate Minority Leader Tom Daschle in 2004, a strict conservative on fiscal, foreign policy and social issues (but not a demagogue on the latter) and is a strong proponent of small business entrepreneurs, taking the side of “Main Street” over “Wall Street.” Had McCain tapped Thune as his running mate in ‘08—a man he actually knew from working the Senate, as opposed to desperation pick Palin—the ticket still would’ve lost, but it’s likely the South Dakotan would’ve acquitted himself well during the campaign and would now be the leading contender for 2012.

Brooks’ column was, at least for now, a de facto endorsement of Thune for the GOP nominee (cynically, it could be that he’s trying to “anoint” Thune, a quadrennial journalistic competition that Joe Klein famously won in 1992 when a story of his in New York proclaimed Clinton as the man to beat), although he correctly concludes that the incumbent Obama, should the economy recover, will be very difficult to defeat: “Republican pros are attracted to Thune because he could rally the hard-core conservatives without scaring away the suburbanites. His weakness is that he’s never really worked outside of government, and he’s almost never shown a maverick streak.”

I’d argue that Thune’s lack of charisma and a “maverick streak” is in reality a plus: no one will out-do Obama in the oration department, and besides, the election will be a referendum on the President. As RCP’s Bevan emailed me over the weekend, “If unemployment is still an issue, it’s possible that all the Republicans need to do is nominate an unobjectionable alternative with a pulse.” My own feeling is that if the unemployment rate is still over eight percent in 2012, the election will be close; if it’s under that number, then Obama wins 40 states.

It’s unusual that in the run-up to the midterm elections the party out of power doesn’t have a number of presidential hopefuls who are frantically collecting chits on the hustings and lining up contributors and staffers for a run at the White House. Yet that’s the case for the GOP in 2010. Mitt Romney’s mentioned because of his mildly spirited race against McCain in ’08, but I suspect that’s simply because he’s relatively well-known. In fact, my colleague Andrew Klein, an Obama stalwart (who sees no realistic threat to the President) hopes that Romney’s the nominee since that could inspire Palin to mount a third-party effort. Texas Gov. Rick Perry, who is now expected to thrash Sen. Kay Bailey Hutchison in the spring gubernatorial primary, will be promoted by activists, but his close association with the Tea Party movement last year, not to mention his nutty threat to have his state secede from the union, puts him, at least to me, in the Barry Goldwater of ’64 camp.

Michael Wolff, the Vanity Fair columnist, author and co-founder of Newser, simply said, “The Republican leadership continues to seem more, not less, cockamamie. It doesn’t even seem likely that a reasonable figure could emerge from a midterm overthrow of the Democratic majority.”

Oh, and then, as always, there’s Gingrich. Many disagree, but I don’t find him credible at all. I suppose his personal baggage (philandering, serving divorce papers to one of his wives while she was in the hospital with cancer) is old news by now, but the nastiness that he displays during his countless speeches across the country is off-putting. Sure, he’s articulate and has a command of issues, but his delivery is tinged with acidity and condescension, not dissimilar to the objectionable Fox television celebrity Bill O’Reilly.

Thomas Schaller, a political science professor at the University of Maryland, Baltimore County, op-ed essayist and author of Whistling Past Dixie, is a liberal whom I respect despite our political differences [http://www.splicetoday.com/politics-and-media/interview-thomas-schaller]. In an email last week, Schaller made the case for Gingrich as the candidate Democrats would least like to face in 2012. He wrote: “Gingrich may be the one candidate who can appeal equally to both mainstream and Washington Republicans, as well as the outsider, conservative wing of the party… He has a track record for knowing how to beat Democrats. And whatever one thinks about some of his futuristic ideas, he’s at least a guy with a vision and some fresh thoughts about policy—as opposed to the rest of the Republicans with their tired mantras about cutting taxes, smaller government and family values. And you can be sure Gingrich will never be a deer-in-the-headlights during a debate or press conference.”

Schaller is certainly correct that Gingrich is no lightweight, and a match between him and Obama might actually focus on real issues rather than celebrity and gimmicks (who can forget McCain’s really stupid idea to postpone his first debate with Obama because of the financial crisis in the fall of ’08?). Still, in my opinion, Gingrich is a retread, and if the GOP can see beyond its midterm nose, they’ll convince John Thune to start making more speeches and campaign for candidates in tight races this fall. At the least, he’ll be subject to the meat-grinder of YouTube/Red State/Daily Kos vetting and if there’s some skeleton in his past it’ll be revealed sooner rather than later. And if he’s clean, the GOP will have a legitimate presidential candidate for 2012.