The dying Newsweek goes for the lowest common denominator. 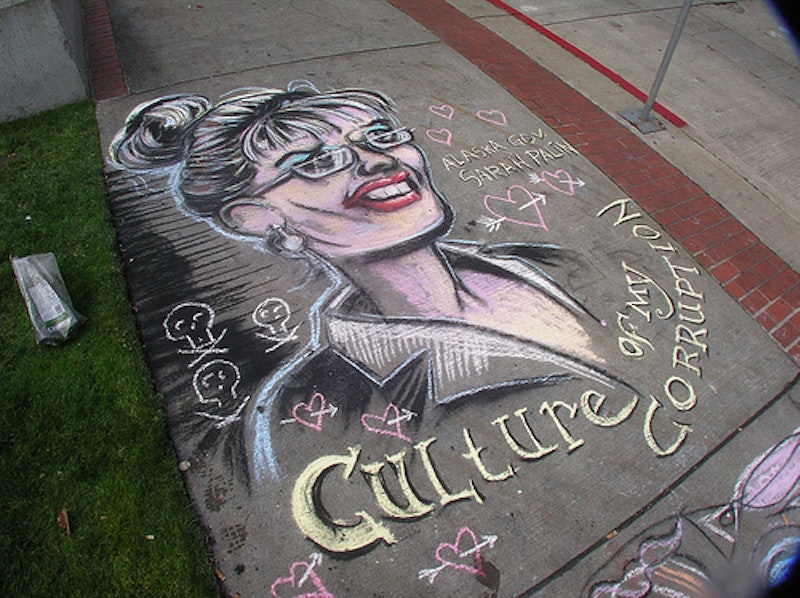 I hadn’t picked up a copy of Newsweek magazine for quite a while, though I’ve always been a fan. “Conventional Wisdom,” “My Turn,” “Quotes of the Week” and other features were all staples with which I’d been familiar over the years. But upon buying what I remembered as a hefty weekly edition, I was shocked at the lightness of its weight—it felt more like a travel pamphlet or a brochure than a magazine. Down to a mere 64 pages, it’s no wonder The Washington Post Co. is trying to sell it.

Therefore, I am officially declaring that print is dead.

Anyway, the reason I picked up the brochure in the first place is that it featured a photo of Sarah Palin on its cover, her hands folded, with a halo of light around her head and a Gothic font screaming: SAINT SARAH. Ohyougottabekiddingme, I thought, and paid the $5.95 to take Sarah Palin home. (I just threw up in my mouth a little bit when I typed that last phrase).

Disclosure: I herein admit to being part of the “liberal media” problem—if you are a conservative Republican reading this, brace yourself, or put Glenn Beck on in the background to offset me.

The opening of the Newsweek article says it all: “To white evangelical women, Sarah Palin is a modern-day prophet, preaching God, flag, and family—while remaking the religious right in her own image,” with a follow up line of “To a smaller number, she is a prophet, ordained by God for a special role in the cosmic battle against the forces of evil.”

Oy. I am willing to bet that even John McCain is rolling his eyes reading this shit.

The article goes on to describe the many ways in which the former beauty pageant contestant is like some kind of modern day chick Republican Jesus—complete with going around saying “Bless You” to people who have not sneezed and Bible references to a woman in Proverbs 31 that her right wing Christians say she resembles. Palin additionally compares herself to Esther in Proverbs 3, because who doesn’t like to compare herself to a Jewish queen in the Bible? At a Christian conference recently she also thanked her “prayer warriors” for the “prayer shield” they built around her. Holy Lack of Separation of Religion and State.

Really, I’m amazed. I knew the conservatives liked her for some reason (though I never really knew what it was) but little did I know they think she is a prophet sent by the Lord to battle the evil forces of Democrats and abortion. In the article, there is a frightening picture of a little girl with Palin photos on her t-shirt, that reads MY HERO and includes a campaign pin for PALIN 2012. Really, Republicans? You are going to bitch and moan and whine and cry about Obama for four years, and then you are going to send Saint Sarah to the White House? Make our Democratic day.

I bet the only Democrat in the United States of America who has a PALIN 2012 pin (besides possibly Obama hiding one at the White House; obviously Saint Sarah as an opponent would increase his chances for re-election) is Tina Fey—because she would love a four-year gig at her alma mater Saturday Night Live (or heck, her own separate show on Comedy Central) playing the “I can see Russia from my house” quitter.

What’s that? Why yes, that’s right—I said QUITTER because my non-political GOD, you Palin-puppets do realize that she quit her job as governor of Alaska to pursue her fabulous new gig on Fox news and the book tour for Going Rogue? Right? And I didn’t find anything in the Newsweek article about how quitting your job as governor of one state qualifies you for the Presidency of All the United States.

But maybe you don’t need qualifications if you have divine intervention.