From cisgender thicket-dwellers to bluegrass Beyoncés. 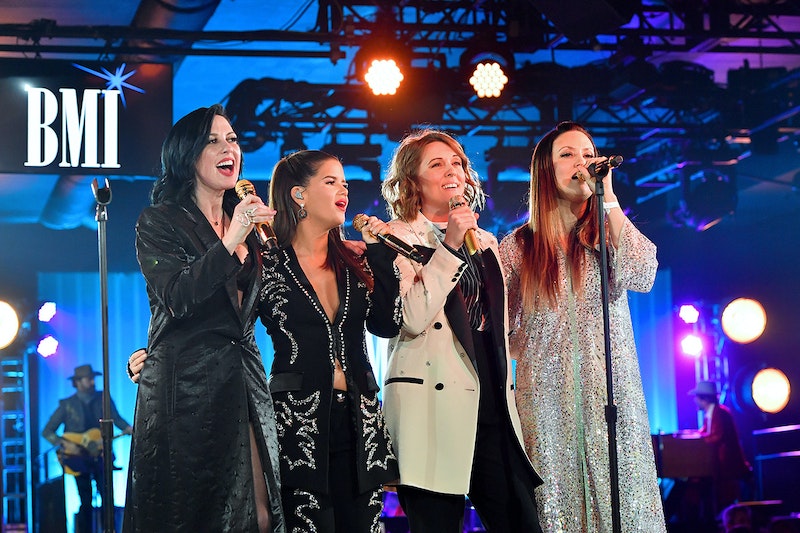 There were many excellent country records released this year. As all of us, together, traversed the year, I reviewed several of the items below (indicated by a link at the artist's name), pondering them at greater length.

The results represented in this Top 10, it goes without saying, are purely scientific, an ingenious application of Big Data. If you disagree with any of my assessments—even if you only disagree just a little bit for a moment—I pity your demonstrable irrationality and repudiate your intolerable insolence.

This is everyone's #1 this year. It's against my religion to agree with “everyone,” but it just is, and I hope somewhat more surprising choices are coming in a minute. As you may have heard, it's Brandi Carlile, Maren Morris, Amanda Shires, and Natalie Hemby. Shires in particular just kills, and there are many great songs, beautifully sung. I didn't love the Maren Morris album Girl, by the way, though the cover makes a good pin-up. But I do dig Yola (see below), whom I, like many, ran into as she spanked a verse on the song "Highwomen," though that's my least favorite song on the album. If She Ever Leaves Me is better.

That this album of wildly inappropriate covers is hilarious is an important factor in its attaining its exalted rank. But it wouldn't really slay if it wasn't being played by a crack bluegrass band. Somehow, whatever they do (Beyoncé's "Irreplaceable," for example, or Bieber's "Baby"), they convince you they’ve made a good decision, because they can definitely handle the material. The group consists of the eminent Digger Cleverly, who originates from a thicket in Arkansas, along with his nephews Ricky Lloyd Cleverly, Sock Cleverly, Cub Cleverly, and DVD Cleverly. It's an inspiring story, an American story: from cisgender thicket-dwellers to the Beyoncés of bluegrass. Their bold gender inversions, for example on the amazing cover of Kelis's Milkshake, emphasize the beautiful diversity inherent in country music, just as Ken Burns preaches. It's not that this has never been tried before—I seem to remember a bluegrass AC/DC cover band called "Hayseed Dixie," for example—but it's never quite been worthwhile until the Cleverlys.

3. Cody Jinks, After the Fire/The Wanting

I was a bit less enthusiastic about that Luke Combs album than some country folks I know. In a similar traditionalist-yet-now vein, these two Cody albums were released almost simultaneously in October, representing the light and the dark side of Jinks. I could do without quite so much psychological self-exploration, which seems to take familiar forms, but I can't do without the production, the band, and Jinks' classic country voice singing great neo-trad material. If the yin-yang of Cody's personality leads to songs like The Wanting, I'm okay with it. This year, former thrash-metal vocalists such as Jinks seem to be coalescing into a cohort, which I find quite puzzling, really.

4. Jenny Tolman, There Goes the Neighborhood

I bow to no one in my enthusiasm for Miranda Lambert, but I feel that this year's Wildcard is her worst studio album. In a similar vein as classic Miranda—though also quite distinctive in her own right—Jenny Tolman rips through this accomplished album, as though she's emerging as a big star. But is she? This is my simple test of whether there's justice in the universe. Maybe when I reviewed this record, or whatever it is that people issue these days, I didn't emphasize Jenny's loveliness (as a singer) sufficiently: So Pretty.

5. Reba McEntire, Stronger Than the Truth

Both Reba McEntire and Tanya Tucker have realized that this is a golden period for country music made by women, though the charts were again bizarrely male-dominated all year. But the women who are writing and producing with Miranda Lambert, Pistol Annies, Highwomen, are making the best country music now, even without radio, the relevance of which fades more with every year. Here Reba avails herself of Brandy Clark and Erin Enderlin, among others, as writers, and assembles her best and most traditional album since the 1980s. When she sings Tammy Wynette Kind of Pain (co-written by Clark), the whole history of women in country music is compressed into the grooves. Or it would be, if there were still grooves. Reba's voice sounds fresh as a daisy, and whatever else she is (sit-com diva or awards-show hostess, e.g.) she’s a classic country singer, completely distinctive. In her time, she was the undisputed Queen, and that voice, full of inimitable ornaments, carries at this point an undoubted genre-defining authenticity. This is all roughly true of Tanya as well; I like her new album too, which was produced by Brandy Clark and Shooter Jennings, and she also deserves a comeback. But I like Reba's album better.

Dale Ann is a beloved and beautiful presence on the bluegrass circuit, and in a long and distinguished career as a recording artist this is one of the best albums, featuring definitive bluegrass players like Steve Gulley, Shawn Lane, Alison Brown, and the unbelievable fiddler Michael Cleveland. Songs like One Good Wiper Blade sound as good as contemporary bluegrass and acoustic country can, in a variety of dimensions, including the gorgeous harmonies. Right now Dale Ann's fine cover of the Dead's Ripple has 739 views on YouTube, so you might go check it out if you ever liked Alison Krauss, for example.

Can a black woman sing country music? Why not? And yet I couldn't name many who have (Shirley Caesar took a crack at it in a gospel mode, though). In a way, Yola, a great singer and a sort of down-home Lizzo, doesn't try. Really, the vocal style is pure gospel and soul, in the timing (often ahead of, rather than behind, the beat) and inflections. But the instrumentation and lyric themes are country, though eclectic (especially exploring early-1960s pop styles). It works remarkably well on songs like Rock Me Gently. And country and soul are close in various other ways: both are blues-based and often feature a highly emotive and charismatic singer. I don't love every moment on this album: the Phil Spector wall-of-sound approach on the first cut, "Faraway Look" is a bit much; I'm surprised that Dan Auerbach, who produced this record and who I associate with a very stripped-down rootsy sound, took that approach. But Walk Through the Fire yields many delights after that. This album, full of throwback gestures, feels fresh in its bold recombinations.

A lot of male traditionalists have worked that Waylon thump, but few do it better than Aaron Lewis. He has that down-low vocal range that seems bottomless, as though he's Randy Travis or Josh Turner, though in fact he's also a heavy-metal singer with a band called Staind. This record has no hint of anything but pure country, however, and it sounds very alive, as though it was played live in the studio by a crack session band. As he goes on, Lewis might want to depart more from the outlaw formula, though he fulfills it beautifully. But some of the best moments on the album, such as The Party's Over, try other approaches. He could sing anything country convincingly. Just speculating now, based on the lyric content of such songs as "God and Guns," that Aaron might not share the Highwomen's politics.

Coincidence? Probably, or probably not. Anyway, I want to credit people like Eric Church and Jason Aldean with keeping something like country music alive through the plague of bro, partly by making a few compromises. Aldean accomplishes this with grungy southern rock, ranging almost from metal (albeit with what is definitely a country singer out front; see Tattoos and Tequila) to pretty straightforward country-rock ballads. There are little pop touches here and there, including some mild vocal effects, rappy verses, and programmed rhythm tracks, but you're under no doubt as to the genre; Aldean's singing exudes country in any context. He's trying to fill arenas and stay on the radio, while still signaling it’s definitely country. Few of his previous outings are as good along these lines as “9,” which is about as elaborately and well-crafted as a big record can be these days. Despite various setbacks, Aldean never stops rocking, though you might sometimes wish he would.

If this material was polished up perfectly, it would be lovely and powerful, but it would also lose some of its freshness and charm. It sounds, rather, as though two young schoolteachers from Pittsburgh moved to Nashville and recorded a CD on a shoestring to sell at their gigs. That makes the quality of the writing and singing even more evident. They hit the now-classic range of female moods, from hard-drinking fun-but-bad (You're the Reason I Drink) to romantically wistful (Kentucky's Never Been This Far From Tennessee: damn that's good).

A few 2019 notes: Orville Peck, a gay, masked cowboy from Canada, sounds a lot like Chris Isaak sounded in the 1980s—all twang-and-echo. His album would make a good soundtrack for the next David Lynch film, if there is a next Lynch film. I'm not sure that there’s been a plausible follow-up to "Old Town Road," certainly not Blanco Brown's The Git Up, which also hit #1 on the iTunes country chart, for some reason. I live out here on Town Hill Road, by the way, so songwriters might want to head out into this redneck heaven in search of the next hit.

Midland's Mark Wystrach might be my favorite country singer right now (if it's not Cody Jinks) but Let it Roll represents a sophomore slump. Blue Highway, the Grascals, Irene Kelley, and Band of Ruhks, among others, also issued excellent bluegrass albums this year.