Four years after his death, I still can’t listen to Bowie’s final record. 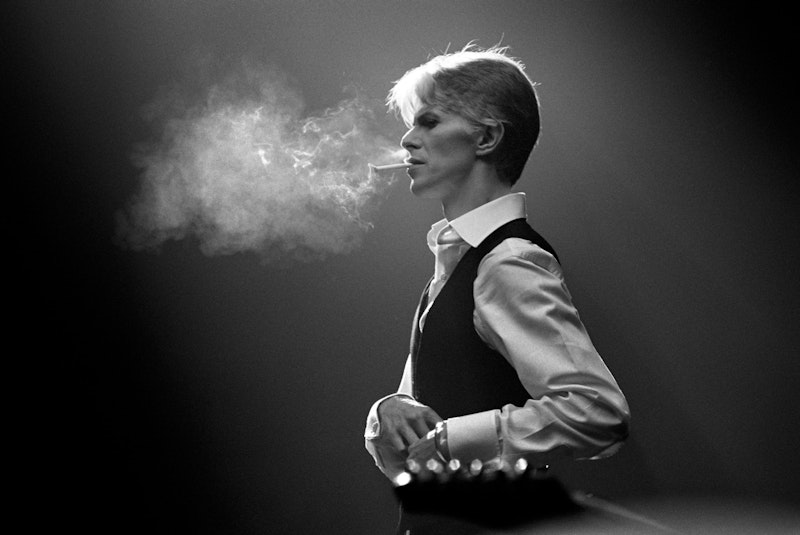 As the days of December ticked away, along with the Best of 2019 music and film lists, there was a steady drumbeat of notable celebrities who “we lost” during the year. Unless someone’s young—meaning south of 60—I don’t pay much attention, and am always surprised when an author or actor who’s in his or her 80s passes away and elicits a reaction of “Oh no!”

There’s one exception, at least for me. Since David Bowie died on January 10 of 2016, I’ve been unable to listen to his last album, Blackstar, either in its entirety or when individual songs come up on the iPod. Bowie was 69, and as he admitted on many occasions, his relative longevity, given a propensity for substance abuse and sexual promiscuity, was surprising. I liked Blackstar a lot when I played it over and over upon its release two days before his death, although I thought the comparisons to Station to Station were typically hyperbolic and the sentiment that “Bowie’s back!” was silly. You can’t replicate at 69 what you produced at 28. What was striking about Blackstar was its haunting, ghost-like feeling; on Jan. 9, I went to a movie with my sons and we talked about record. Nicky, the day before, posted a positive review, writing: “Bowie turns 69 today, and by the sound of Blackstar, he has a few more great records to come in the latter portion of his life.”

While I agreed with Nicky’s assessment of the record, I told him, “Blackstar is his orchestrated obituary, and he won’t be around much longer.” I’d no idea it would come so quick—that night—but his undisclosed illness was laid bare on the record. The title song sounds as if it’s being played in a church, at a funeral, with a very weird and exhausted Bowie singing, “On the day of execution, on the day of execution/Only women kneel and smile, ah-ah, ah-ah/At the centre of it all, at the centre of it all/Your eyes, your eyes/Ah-ah-ah/Ah-ah-ah.” And in the mesmerizing “Lazarus”: “Look up here, I’m in heaven/I’ve got scars that can’t be seen/I’ve got drama, can’t be stolen/Everybody knows me now.”

Talk about a death rattle.

I didn’t claim clairvoyance at the time when my younger son texted me with the news of Bowie’s death, it just seemed obvious. And I still can’t listen to any of the songs.

It was the timing, of course, another instance of Bowie shedding a layer, which he parlayed so brilliantly in the 1970s. He knew his days were numbered, and worked on overdrive for the record in 2015; his bandmates and producer Tony Visconti, aware of his condition, summoned up all their juice to create the best Bowie record in years. (It reminds me of a dying Ulysses S. Grant writing his autobiography to leave money for his family, although Bowie was wealthy.)

Usually, when a rock star of that approximate age dies it doesn’t coincide with an ostensible rebirth of a career. Like Ric Ocasek, for example, who died last year at 75, after a wonderful career with the Cars, but who hadn’t created significant new music in years. With Ocasek—or Dr. John, Robert Hunter, Ginger Baker and Leon Redbone, who all died in 2019—the news was a curious jolt and then tempered by the fact that he lived a fairly long life (especially by rock star actuarial tables) and you felt bad for his loved ones, but felt no personal loss.

And Bowie had a wondrous, ground-breaking career, from his late-60s recordings, folk rock/rent boy tunes, to “Space Oddity” (a dud in the U.S. when released in ’69, but re-issued in ’73 and became a big hit) to Ziggy Stardust, the “plastic soul” of Young Americans to the Thin White Duke of masterpiece Station to Station, and then the Berlin trilogy of Low, “Heroes” and Lodger. Throw in his canny collaboration with a dying Bing Crosby for the now Christmas staple rendition of “Little Drummer Boy,” his work with Eno and Iggy Pop, teaming up with Freddie Mercury for the magnificent “Under Pressure,” the song “This is Not America” for the film The Falcon and the Snowman (with Pat Metheny) and covering Bruce Springsteen’s “Saint in the City” (Springsteen at the time was said to be mortified by Bowie’s camped-up version, but as today’s Ambassador of Rock, sang “Rebel, Rebel” at his first concert after Bowie died).

I like a few songs from 1983’s Let’s Dance, although the only ones that hold up are “China Doll” and “Modern Love” and then he was mostly off my radar, though I gave Tin Machine a shot.

But if it hadn’t been for Blackstar released just two days before his death, and foretelling that fate, it would’ve been different. Although an early and sustained fan, I would’ve reacted with a, “Jeez, that sucks,” reminisced about his great records and the one terrific concert I saw of his in 1978 for the “Heroes” tour, and that’d be it.

When rock elders meet their maker it’s not of the same import as rising stars who died young. I think of all the great music Duane Allman (dead at 24 in a motorcycle accident) would’ve made; Jeff Buckley, who drowned at 30 not so long after his astounding Grace; Sam Cooke and Otis Redding and Kurt Cobain, who never hit 30; and most obviously Jimi Hendrix, dead at 27, with a career ahead of him—if he stayed clean—that had no limit. Even had Hendrix checked out at 45, just as he re-defined the guitar in impossible ways (my son, after listening to the newly-released Band of Gypsys box set of Fillmore East shows on New Year’s Eve in ’69 and then New Year’s Day—Songs for Groovy Children—called him an “electrician”), it’s not hard to imagine Hendrix forging a new rock/jazz fusion that would’ve jolted the 1970s.

Bowie’s quote about death, “I don’t know where I’m going from here, but I promise it won’t be boring,” could almost make you a believer.