Enough Authenticity for Anyone

Steel Blossoms is country both classic and of this moment. 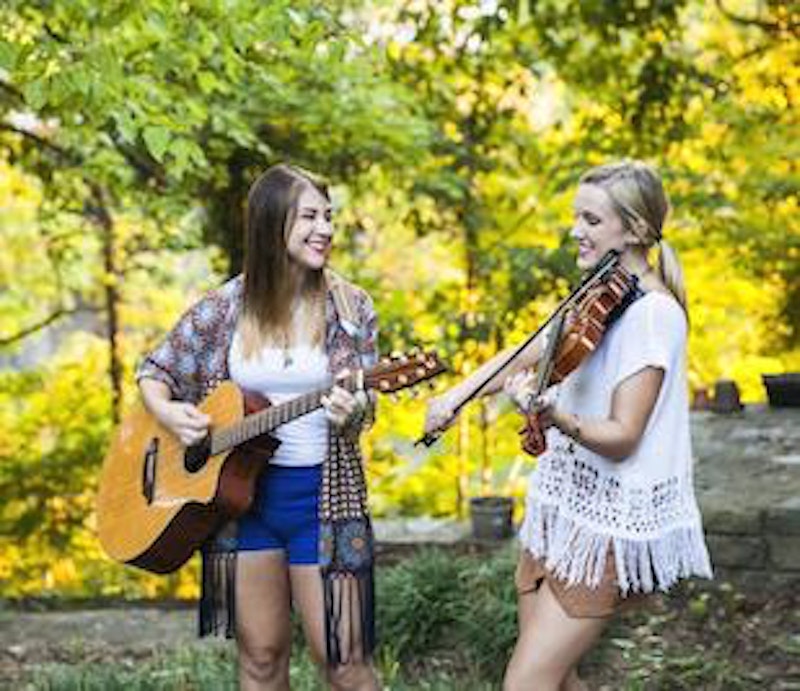 I'm definitely over the authenticity debate, insofar as it's about performers and not performances. Picture with me a dude who grew up in a shack in the Tennessee hills, or in small-town east Texas; he drinks bourbon, shoots things all day, goes four-wheeling with girls in cutoffs. He's country as piss from baseball cap to boots. But then he half-assedly “raps” his country hits over a mechanical claptrack. What good is his authenticity doing you, anyway, or me? And it runs the other way too: like, you're a pair of elementary school teachers from Pittsburgh (admittedly, it gets country quick in every direction from downtown), but you sound like Emmylou Harris singing with Linda Ronstadt. I don't buy his album; I buy yours (because I still buy albums, albeit now on iTunes. I don't even know why.)

The Steel Blossoms (Sara Zebley and Hayley Prosser) provide all the country credentials anyone should ever need on their self-titled 10-track album. It's beautiful. It's emotionally intense. It's alternately shattering and amusing. And it's beautifully sung, with Prosser in the lead and Zebley on harmonies (and a fine fiddle), working over fundamentalist country arrangements.

Zebley and Prosser's immediate influences, both with regard to the sound and to the lyric themes, are artists like Miranda Lambert and Pistol Annies, the trio of Lambert, Angeleena Presley, and Ashley Monroe. The first Kacey Musgraves album was in this vein, and the records of the brilliant Brandy Clark (who’s long overdue for the next one) and Ashley McBryde. It's a country sub-genre at this point, and it should dominate the radio, though it doesn't. (I also still listen to the radio.) One purpose of this material is to square up to the miseries of modern living, in a small town or a small city, as experienced by young women. Steel Blossoms has some of the darkest songs you’ll ever hear, on themes like addiction and abuse.

But all these artists go beyond feisty to funny and sick: they have a tendency to kill bad boyfriends, or issue extremely vivid threats. And then they go out partying with the girls, smoking dope, drinking dark whiskey, popping pills, dancing, regretting it all in the morning. We get versions of that here in great songs like You're the Reason I Drink, "Killed a Man," and "Trailer Neighbor":

She's my trailer neighbor, always there to do a favor,

catch me up on what's been going down,

like who's in labor, whose mugshot made the paper,

and whose man's been out fathering the town.

If I need a cigarette, a good cry or some Aquanet,

or someone to send prayers to the savior,

I waltz right over to my trailer neighbor.

As a cohort or movement, Lambert, Clark, McBryde and co. render American gender relations as they stand now with a kind of rigor, in the form of specific stories that take on a mythological character and an operatic intensity, even as the performances are relatively direct or even restrained. Their voices try to connect intimately with listeners, without a vocal effect in sight. That’s just the sort of thing that you want (or, anyway, that I want) from country music.

By such means, Steel Blossoms takes you on as intense an emotional journey as any country album you’ll ever hear.

"Heroine," for example portrays the whole arc of addiction, narrated in the first person by an addict: "It's the groom and I'm its bride." In some ways, it's even more shattering to hear Steel Blossoms sing this than it would be to hear it from Lambert or Monroe, or even John Prine, who's an obvious reference in the writing, as he is for several of these artists. Prosser and Zebley sound very young, and their voices have an indelible innocence. Listening to voices like that sing about this sort of pain and self-loathing ("I started doing things I swore that I'd never do. That's the kind of girl that it turned me into.") I find myself praying that Prosser is writing in persona, because she’s convincing. They definitely do write in persona on some of these songs, as on the astounding dirge "Revenge," narrated by a dead abuse victim haunting her abuser, infesting his dreams, driving him mad.

The traumas put the party songs ("Pick Me Up") in a different light, because the sources of pleasure or amusement (substance abuse and men) are also likely to be the sources of the murder or the genuine emotional pain on the next cut. Together, they yield a roller coaster.

Implicitly, a lot of this is of-the-moment politics, as on "County Line," a rich-and-poor side of town ballad. But it’s all framed through specific people's particular stories, and it’s all sung in these beautiful intertwined voices. Those voices are entirely authentic: the country timing (just behind the beat) is perfect. As if to prove all of that beyond doubt, they finish with "Kentucky's Never Been this Far from Tennessee," a classic original missing-you song about an interstate relationship that could’ve been a country hit for Tammy Wynette or Patty Loveless. (On the video, with less than 300 views as of this writing, Prosser has to read the lyrics of the song they just wrote off her phone.)

That's enough authenticity for anyone.