The Highwomen Redeem America (and Americana)

There's not liable to be a better record this year. 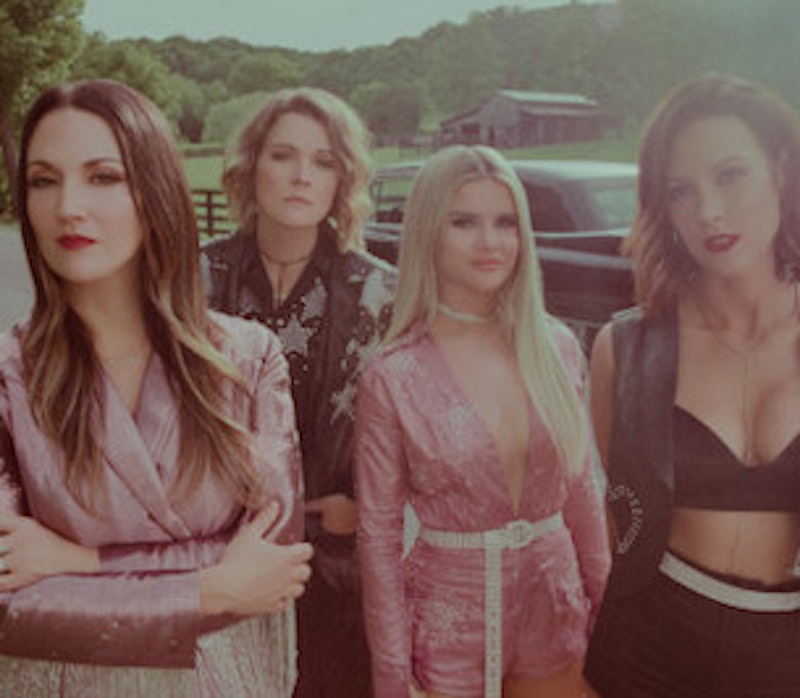 Though I was happy to hear of a newly-forged country/Americana/folkie supergroup consisting of Maren Morris, Natalie Hemby, Amanda Shires, and Brandi Carlile, I had some reservations as I pushed “play” on The Highwomen. I haven't loved the last couple of Brandi albums; she's sounded awfully down. And because these great musicians are entrapped, like all of us, in a bizarre world in which all the singles on the country charts are by male artists, and because the Highwomen are ticked off about that, I figured they were liable to teach us a good lesson about the value and power of women, which would be admirable but not necessarily pleasurable.

The first couple of songs confirmed my fears and also overcame them. The song "Highwomen" is an empowerment anthem that will have a run in Women's History Month curricula. "I was a freedom rider," "a mother," "a Honduran refugee," "a healer" accused of being a witch, and so on. It’s also extremely well-written and well-sung, which—through many changes of style and lyrical content—is characteristic of everything on the album. I was just getting ready to snicker "Are you really, really a Honduran refugee?" when I found myself tearing up and actually contemplating some of the astonishing history of gender oppression.

In other words, I needn't have worried; I was in good hands. This is a superlative set of talents, as songwriters and singers. There's not liable to be a better record this year.

The second song, "Redesigning Women," takes a more trad country approach but goes the same way, hitting you with Rosie the Riveter, etc. But it also begins to develop the wit and the joy that builds throughout the record, as they describe women, among other things, as "a critical reason there's a population." They indicate that they like shoes and Chardonnay, and begin getting a bit more personal and free-wheeling.

With those two (excellent) lectures out of the way, the Highwomen explore the full range of lyric themes, such as love going right or terribly wrong, or all the rowdy or melancholy subjects touched on by the other female country supergroup of now, Pistol Annies (Miranda Lambert, Ashley Monroe, and Angaleena Presley). The Annies probably wouldn't narrate a song from the point of view of a refugee. They make great records (three so far), but they also don't explore motherhood very much, or lesbian love. But either of these great ensembles could deliver lines like "I rip the filter from my mouth and all my cigarettes" ("Old Soul").

The song that really killed me the first time through was "If She Ever Leaves Me," sung by Carlile, which has been described as "the first gay country song," which it’s not. But perhaps it's the first one this direct. Her lover might leave her, Brandi feels, but not for a cowboy. "I've loved her in secret, and I've loved her out loud; the sky hasn't always been blue. It might last forever or it might not work out, but if she ever leaves me it won't be for you." It's a great twist, and makes you realize that we might just be getting started on the love song. Also we might be getting started on what women can do in country music.

That's also a theme of "Highwomen," and straightforwardly or subtly they pay tribute throughout to the history of women in country music. On "My Name Can't be Mama Today," Shires sings a verse in the voice of a young Loretta Lynn (one of the group's early gigs was Loretta's 87th birthday party). That's a bold move, accomplished perfectly. The intro of that song is a reference to Lucinda Williams, and there are echoes of Emmylou Harris and Dolly Parton in the gorgeous harmonies throughout.

It really is a supergroup. Morris is the top young female country star (with the possible exception of Kacey Musgraves), one of the few who can even hope to put a song on the male supremacist chart now. Carlile is beloved by many, including Barack Obama, who recommended her astonishingly wonderful career song The Story. Shires is a fine fiddle player, and has played with a late version of the Texas Playboys and also in her hubby Jason Isbell's band. She kills here on a song about the death of her father (or of the song's narrator's father, at least), "Cocktail and a Song." She's the revelatory singer on Highwomen.

As a writer, Natalie Hemby has had five #1 country hits. She so-wrote most of Miranda Lambert's brilliant album The Weight of These Wings. Keith Urban and Toby Keith have cut her songs, and she co-wrote "I'll Never Love Again," for Lady Gaga in A Star is Born. It's not all due to her, but the writing on this album is strong in every detail.

Obviously, the intended audience for this record is primarily female. But, speaking of cultural appropriation, if you're going to share your experience this vividly and this beautifully, you're inviting everybody. I felt connected to the voices and the songs; I had that feeling that they were narrating my life, even though it's not my life at all. It's the life of people I’ve loved, however. Maybe I felt like I understood them and myself and our relations a little better than I did before I listened. The Highwomen are speaking across our divisions, whether that's just what they're trying to do or not.

The production is straightforward and gimmick-free. That's because, in order to destroy and re-make country music, these great writers and singers don't need anything but their real selves.