They'll make you just a little happier than you were before. 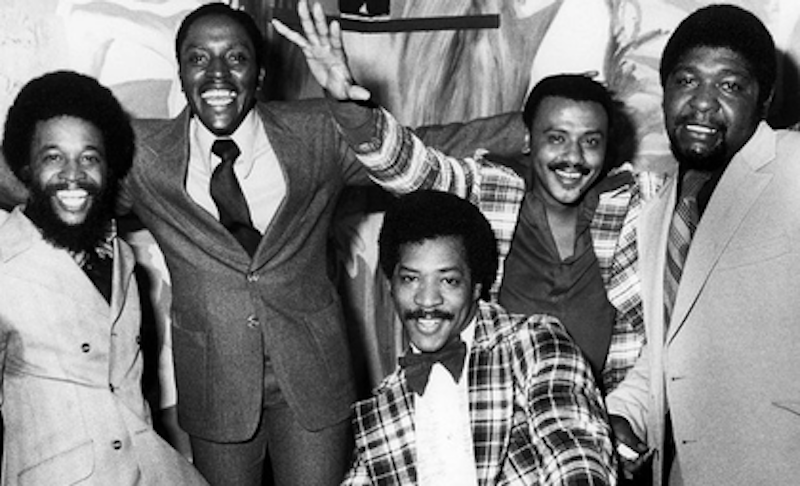 I'm not a straightforward enthusiast for a cappella music, and you won't find me downloading Rockapella albums or trailing along as a fanboy on the glee show circuit. It's all just a bit too goofy for a cool-ass motherfucker such as myself. But then there are the Persuasions, the greatest and longest-lived (1962-2012 or so) a cappella group that ever existed, embodying a beautiful legacy of soul and of many kinds of music.

The legend has them starting on the street corners of Brooklyn in the early-1960s. Their shows in the 1970s, the decade they emerged to become touring artists, were the most joyous I ever saw in a bar (in this case, the Bayou in DC): loose and precise, dedicated to disseminating joy, creating a (usually secular) soul revival in which everyone got to participate. They ended each show by bringing up audience members, teaching them how to sing the parts, and then leaving the stage one by one, so that the show went right on, now fully under the auspices of the audience.

The looseness, the precision, and the joy were all present on their first album, recorded live and produced by Frank Zappa. (That seems surprising, perhaps, but few people ever had more eclectic taste than Zappa.) 1970's Acappella sounds like someone turned on a cheap cassette recorder at a live show. The quartet just starts in clapping and rapping, seemingly randomly, until it forms up into Searchin' for my Baby. It's more than a series of songs: it's the creation of a whole context of pleasure in which everyone is caught up together.

Quartet harmony singing is one of the most enduring and least genre-specific musical configurations. You run into it everywhere from black gospel (The Soul Stirrers) to bluegrass (Bill Monroe's bands, which often performed “hymn time,” their religious segment, a cappella) and reggae (the Wailers [okay, a trio] and the Gaylads, for example). And of course it was a dominant set-up in doo-wop in the 1950s—which is how the Persuasions started out—and the soul music of the 1960s, which is where they found their niche.

The basic source of the Persuasions' sound is Motown, and when in doubt they'd start up a Temptations medley. Their great lead baritone Jerry Lawson, who died last year, can sound like David Ruffin or Levi Stubbs of the Four Tops. But the real signature of the Persuasions is the astonishing Jimmy Hayes. He plays the bass voice like he's playing a bass guitar or an upright: he primarily sets a rhythm and plays notes rather than singing lyrics: he's the rhythm section. And he's always perfect.

They put out a classic series of albums—one a year or more—in the 1970s: delights such as Street Corner Symphony and We Still Ain’t Got No Band (which, I think, was never even released on CD, much less on MP3). It's mostly covers, though there’s an occasional recitation with themes drawn from their own members and their own story. Well, Rockapella and the college a cappella group do covers too. But the Persuasions' are often both surprising and definitive, cutting to the essence of all kinds of songs.

And there are constant surprises, such as Hymn #9 from their 1972 gospel album Spread the Word, in which a father tells the story of losing his son to the Vietnam draft and then to heroin. Here the delight in which the Persuasions specialized gives way to profundity. They recorded another gospel album 30 years later (Sunday Morning Soul), and it's just as strong and as heartfelt.

They kept going until they couldn't anymore. Not so surprisingly, in later years they produced a series of cover albums in which they sang their way through the catalogues of Zappa, the Beatles, the Grateful Dead, and U2, among others. These wouldn't have been what I would’ve recommended if I'd been their agent. How about a tribute to O.V. Wright or Solomon Burke instead? But these albums are surprisingly excellent, lending new life to exhausted and overplayed songs.

I intend to avoid anything connected in any way to U2 for whatever days may remain to me, but recently I downloaded the double set Persuasions of the Dead (2011), and I keep on putting it on and smiling as it plays. The stylistic juxtaposition makes no sense to me, but it works. The boys don't just grab the songs you'd expect them to; evidently they listened through the whole Dead catalogue and came back with some surprising and excellent choices: "Ship of Fools" for example, or "Brokedown Palace." And on the cover albums, they occasionally slip in a few instruments or female voices. Well, why not?

I'm sure that by the time they were recording U2 songs they were just trying to hang in there and make a living. But whatever they were doing, they kept creating joy and surprise at every turn right up until the end. On Here Comes Sunshine 2 from the Dead album, for example, they descend into a pure rhythm of claps, stomps, mouth clicks, and so on. It's so unexpected and cool that even a motherfucker such as myself is a bit happier after listening to it than I was before.