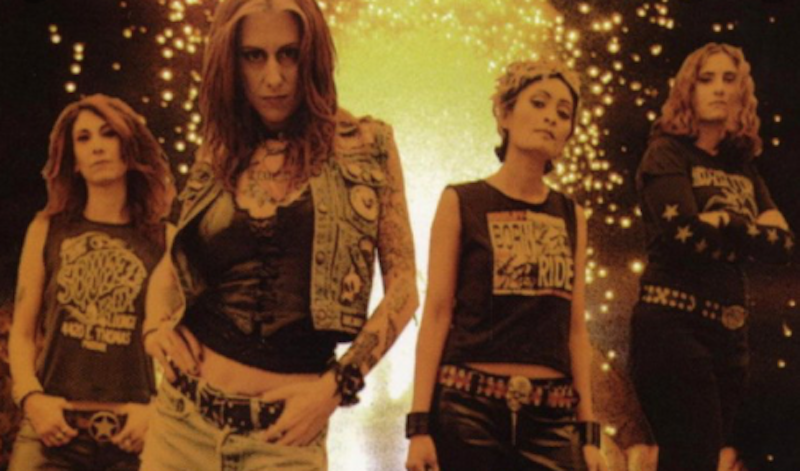 Perhaps, as is so often the case, I’m judging you too quickly, but I bet you've never heard of the band that—to bring us all redemption in the midst of our sin—made the last best rock album. Betty Blowtorch was all-female heavy metal/punk band from southern California. Their only record, Are You Man Enough? came out in 2001, just before all reality dissolved into vocal effects and rote EDM, leading directly to climate change, Donald Trump’s election, and the horrendous dynasty of the New England Patriots. Are You Man Enough? is a rock manifesto: a bit melancholy in retrospect despite its extreme kick-assedness. Not only did rock music die shortly after the release, but so did the band's lead singer and guiding light Bianca Butthole (Halstead), in a car wreck. Despite the sharp, hilarious writing and crushing musicianship on the album, it has rarely resounded since.

In the 1990s I was a fan of what I took to calling “girlpunk”: I liked riot grrlz such as Bikini Kill okay, but what really killed me was L7, a crack group of XX killers who played hard, fast, tunefully, and well, right at the cusp of punk and metal (what kept it punk was the vocal style). I probably first heard them on the soundtrack of my then-favorite movie Tank Girl and afterwards saw them a couple of times on tour. Whatever they did, L7 stayed true to the macho rock 'n’ roll persona of people like ur-punk Joan Jett. By 2000, thinking about the history of punkish people like Chrissie Hynde, Girlschool or Hole, it was possible or even sensible to consider rock a female style. Many women by that point had bent the leather-clad cockstrut and guitar shred to gender-critical ends.

Late to this atmosphere, Betty Blowtorch emerged from a band called Butt Trumpet and included L7's bassist Jennifer Finch in their terminal lineup. They were pointedly reprehensible in various ways, extremely bad girls, as many a hard rock outfit of 20 years before portrayed themselves as extremely bad boys. Betty Blowtorch devoted themselves to embodying the rock 'n’ roll lifestyle more clearly than Aerosmith ever had. The songs present that straightforwardly and play around with it ironically, and are fine pieces of rock writing (the “theme” linked above might not show this clearly, but gives you the subcultural vibe), performed with great momentum and surprising moments of sincerity and shifts in tempo.

Almost 20 years on, it’s still too much for a lot of people, and I don't necessarily recommend putting it on in the car as you drive your kids to school or your mom to the retirement home. I get the impression that my shockingly sweet girlfriend doesn't really like it. Even the mere fact that you know Betty Blowtorch at all, much less that you just put on Size Queen, "Part Time Hooker," or "Shut Up and Fuck" is liable to lower you in the eyes of all decent people. At this point in my own decline and self-betrayal, Are You Man Enough? is a pleasure I gloat over alone. Bianca wouldn't like that it's turned out that way, but she'd understand.

A song like I Wanna Be Your Sucker stands as a killer feminist/anti-feminist statement, and an unknown monument of girlpunk and hard rock. "Winter, spring, summer, or fall, I am your booty call," observes Bianca, and then she goes feral, snarling between the lines as though she's in the process of devouring you in a melodic blood ecstasy.

But Betty Blowtorch had other moments and moods. I'm Ugly and I Don't Know Why is a hilarious and sort-of deep depiction of a certain kind of childhood self-image crisis, and a completely anomalous composition in the hard rock environment. In the end, baby Bianca wasn't impressed by the explanation she was offered: "You're ugly because you're ugly." Songs like this are pretty courageous acts of self-reflection and self-revelation, the sort of things that make you realize that you haven't been quite fully honest. It's as though Elizabeth Wurzel was a rock star. Then there's "I Wish You'd Die": "Star light, star bright (wish you'd die), first star I see tonight (wish you'd die), I wish I may I wish I might, put you in a ditch tonight."

Their best song Love/Hate shows where they might’ve gone: deep and raw, but also well-crafted. Introducing the song onstage in the linked video, Bianca gives this: "My car broke down today. My husband's smoking crack; I don't know where he is. True story, ladies and gentlemen." I believe her, and I wish the 2000s had gone better for everybody.

They garnered some attention opening for the redoubtable Nashville Pussy, but never broke through even a little. After Bianca's death a few more bits were released, and a documentary of a couple of gigs, which doesn't even seem to be up on YouTube. It was a sad end for a band that sounded so alive. Betty Blowtorch claimed—as many had before but no one has since—that rock 'n’ roll can never die. We who are still trapped here above await the second coming, as it were.