Cyndi Lauper's first appearance on record is her best. 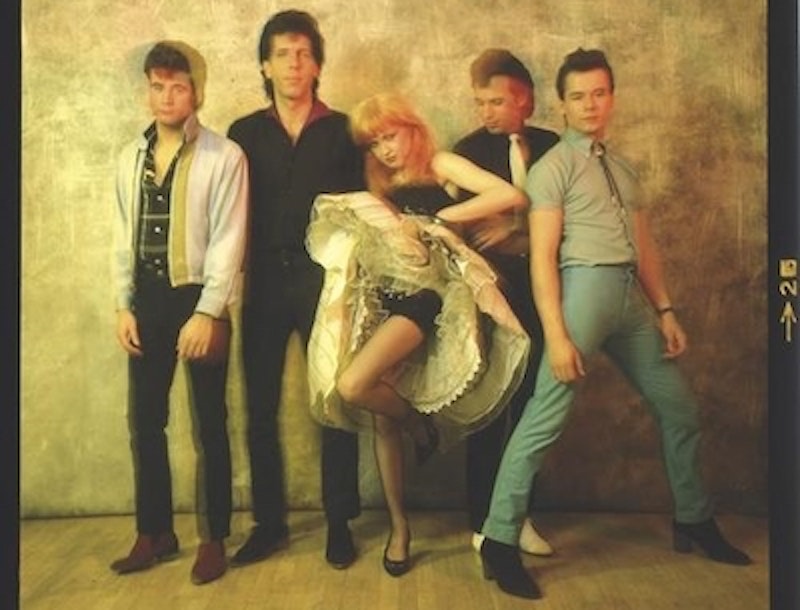 In the 1980s, I interviewed a number of pop stars. Among them all, Cyndi Lauper was the most sincere and also the nicest. She was in London in 1984 on her first big rollout and had the #1 UK single at that moment with "Girls Just Want to Have Fun." Ensconced in a chair in a hotel bar, she was doing half-hour hits with a series of magazine writers, as makeup and hair people fussed around her and management types fluttered about. With dolls dangling from her ears and in the most extreme New York accent ever heard, she was greeting everybody like long-lost friends, and very much enjoying her newfound celebrity, while also finding it hilarious.

She ended up shooing people away, giving me an hour and trying to make actual contact. I got on her good side by telling her how much I loved the band she sang and wrote with before her solo splash: Blue Angel, a New York new wave/rockabilly act or neo-roots throwback punk band, or something along those lines. Blue Angel was one of the first albums I ever reviewed (in 1981 for the Washington Star), and with the possible exception of The Pretenders it was my favorite album of the early-1980s. I listened to it daily for a couple of years.

What still kills me about Blue Angel is Lauper's singing, which the whole instrumental frame—straightforward, featuring sax and Farfisa organ—is designed to showcase. Lauper soars and whoops and hiccups and growls (girlishly, it is true) through her own excellent lyrics. This is from the album's opener, Maybe He'll Know:

Something calls to me I know I know.

I hear an echo start to pound like a drum. I'm

chanting a song, anchor me

but don't take too long.

I've got this anxious feeling,

Lauper re-recorded that song in a similar arrangement for True Colors (1986), with Billy Joel singing backup and state-of-the-art production. The Blue Angel version is better. She wrote "Maybe He'll Know" and most of the other songs with John Turi, who played keyboards and sax. It seemed like almost no one heard the album, despite my non-stop expressions of enthusiasm, at least until it was re-released after her solo success. But it embodies one of the great vocal performances in rock history.

Lauper sounds like no one but herself, even though various influences run in strands through the performances: when I interviewed her in '84 she mentioned Buddy Holly, Frankie Lymon, Marlene Dietrich, and (for heaven's sake) Lester Young. One’s liable to think of Roy Orbison, as well, especially on an operatic flight like "I'm Gonna Be Strong." As a coloratura punkette, Lauper landed somewhere between Deborah Harry and Kathleen Battle, two killer divas of that moment in NYC. The purity of her soprano contrasted almost hilariously with her fun/bad street kid persona, later on display as she messed around in the world of professional wrestling or made videos that seemed to be parodies or refutations of Madonna.

For a moment, she was Madonna's rival for hottest, sweetest pop star of the moment. But perhaps she got dismissed as a sort of novelty act; she’ll always be associated with a particularly extreme 80s look and with "Girls Just Want to Have Fun." Great song, but she has been an extremely strong singer throughout her career, and underappreciated in that dimension. She never quite accomplished the sort of transformations that saw Madonna through all those different periods of pop and fashion, though she had a big hit, for example with "True Colors." She's also had many a comeback (Kinky Boots and ads for psoriasis medication [which, as a fellow sufferer, I appreciate]), though not a re-climb on the charts. At this point she's a beloved figure of nostalgia and advocate for LGBTQ rights.

But I don't think she quite showed all she could do as a singer after Blue Angel. She should be cherished not only for her niceness but also as one of the greatest singers ever to make a classic pop record. This one.

Listen in particular to "Maybe He'll Know," I Had a Love, "Take a Chance," "Can't Blame Me," "Fade," "Just the Other Day," and the rock-out finale "Everybody's Got an Angel."