The controversial producer's influence is undeniable on the underground Florida hip-hop scene. 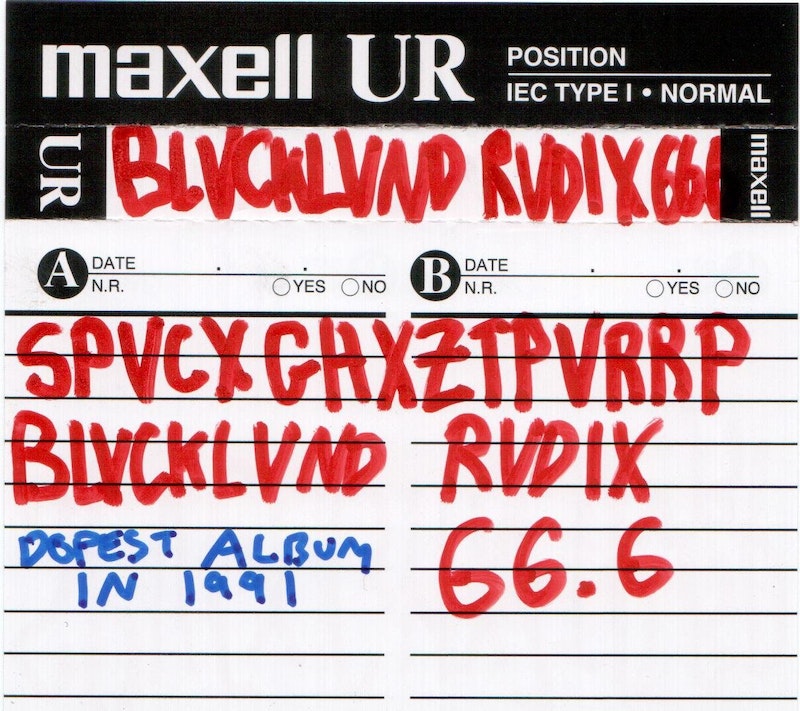 I plunged headfirst into BLVCKLVND RVDIX 66.6, SGP's most critically acclaimed album. The production is fascinating and confusing: the chopped-and-screwed Houston influence rings vibrantly throughout the tracks, with aspects of horror rap icons Three 6 Mafia. The obscure mixing of the tracks was the first thing that leapt out at me. I had to wiggle my headphone cable around to make sure there wasn't a bad connection or a faulty wire—the music was cutting in and out. Trap-like drumbeats were buried in the mix at the same muffled volume as the heavy waves of reverb and samples. The vocal tracks were mixed noticeably louder, then quieter again. But it was all an artistic choice. Samples of demonic laughter are thrown in throughout the album, as well as sound effects from film and video games such as Godzilla and Mortal Kombat.

Miami-born SpaceGhostPurrp relays a vibe that relies heavily on 1990s nostalgia—he often includes samples from arcade and video games. His references to the codeine-based drink “lean” are include the hazy purple imagery used in his album artwork and music videos, creating a twisted dreamlike atmosphere similar to a bad LSD trip. Even his name is an obvious homage to the Adult Swim show that many 1990s babies grew up on (myself included.) The mood that SGP lays out is an intricately crafted and luring fishhook to those who loved 90s experimental hip-hop producers like MF Doom, Madlib, Danger Mouse, and J Dilla, especially in the widely regarded Nasa: The Mixtape.

However, it doesn't take long to catch onto SGP's main weakness. His lyrics are often criticized for lack of imagination and originality. A$AP Rocky, a onetime collaborator turned adversary, described it best: “He's corny. Stick to making beats, that's all I gotta say.” And it's true—SGP’s lyrics are his biggest downfall. Aside from themes that appropriate misogyny and violence, SGP's bars are consistently uninventive, which can add to or take away from his appeal depending on how seriously you take his music.

Perhaps if SGP kept his opinions to himself, he wouldn't have sunk as low as he has. But his manic Twitter feed gives Trump a run for his money. Following A$AP Yam's accidental overdose, SPG tweeted, “Where is yams ? Oh I forgot he's dead my bad.” (He later reunited with A$AP Rocky to record a tribute track, but the two seem unable to fully squash their beef.) SGP's sense of humor is questionable, murky, and even sociopathic at times, but not inauthentic. In theory this trait is admirable, but after closely examining the details it becomes pitiful and punishing to witness an artist who had so much promise and ambition stoop to such lows. But SGP's homophobia and misogyny can’t be ignored. They're not hidden, always bleeding into the forefront.

Though he's far from a perfect person, I can't help but fuck with SpaceGhostPurrp's music. His atmospheric beats are a callback to the hip-hop I loved in high school. There's no questioning SGP's talent and influence on underground hip-hop, particularly in the Cloud Rap and Florida scenes. His hip-hop collective Raider Klan was highly influential, both musically and aesthetically, with their use of dark choppy production, all-black clothing, distinct hieroglyphics, and nihilistic lyrical content that paved way for many younger rappers to come. A SGP comeback probably isn’t soon in the cards, but as time goes by I believe he’ll continue to subconsciously spread influence into the evolution of hip-hop. The music is simply too brilliant to ignore.