This 1970s-90s duo was the greatest novelty act in popular music’s history. 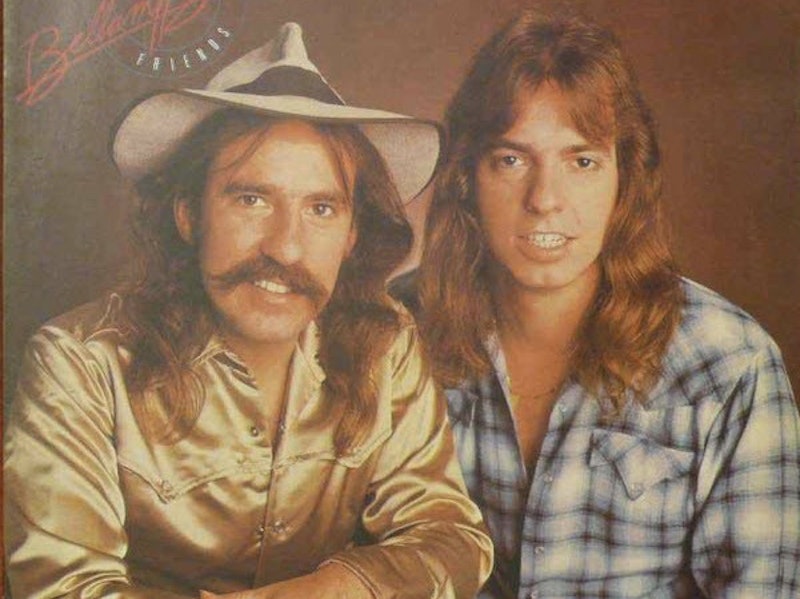 Often, their lyrics were humorous takes on the day's news or fads or trends. But unlike "Itsy Bitsy Teenie Weenie Yellow Polka Dot Bikini" or "The Streak," the Bellamy Brothers' "If I Said You Had a Beautiful Body Would You Hold It Against Me," issued in 1979, is beautifully-made and performed Caribbean country, in the style of Jimmy Buffett, but better.

David and Howard, originally from Florida, had a hand in novelty master Jim Stafford's repertoire and stage show, as David co-wrote Stafford's "Spiders and Snakes" and Howard worked as his soundman. They eventually scored 20 country #1's, produced and performed with great craft. They never used the wild gesticulations and cartoonish voices favored by Stafford or Ray Stevens, but placed their hilarious observations and re-workings of cultural clichés over smooth, solid country and rock tracks. They've released dozens of albums over the years—a vast and uneven oeuvre—but their great singles of the 1980s and 90s were delightful, both lyrically and melodically. They still sound great.

When social scientists come to study cisgender heterosexuality as an historical phenomenon, they’ll have to immerse themselves in the Bellamy Brothers. "What you need is a sugar daddy, diamond rings and a brand-new Caddy: little things to help a girl make it through," they trilled, laying their country-star cards on the table. But then they nodded, sort of, to feminism: "You're the kind of woman that likes to be on her own. Except for those times you need a man all night long."

"Do You Love as Good as You Look?" they asked, in another pick-up song, a theme they made into a genre. "I'd Lie to You for Your Love," they declared, in an admirable slice of singles-bar honesty: "I'm a doctor, I'm a lawyer, I'm a movie star. I'm an astronaut, and I own this bar." But once they got “her” home, they'd just start crooning, with a painful and amusing sincerity."I Love Her Mind," they claimed. "I Love Her Mind" was one of a number of times the bros managed to land mild but excellent reggae on the country charts, the most explicit (and least good) being "Get Into Reggae, Cowboy.”

They started singing anthems for their lost generation. "Kids of the baby boom," they intoned. "We had freedom; we had money, here in the land of milk and honey. Counting our chickens way too soon." And they kept track of developments in communication technology: "Now we all can run computers and we all can dance; we all have Calvin Klein written on our underpants. At 6 o'clock like robots we turn on the news and watch those third-world countries deal out more abuse." Good song, despite some lyrical enjambment, and good sociological data, laced with profundity. "Our optimism mingles with the doom."

"He's an old hippie," they observed, in a song that strikes close to home, "and he don't know what to do." The Bellamys were writing and singing the lives of us, the greatless generation. Theold hippie "gets off on country music 'cause disco left him cold. He's got young friends into new wave, but he's just too frigging old. He's an old hippie, his new life is just a bust. He ain't tryin' to hurt nobody. He's just tryin' real hard to adjust."

Almost unbelievably, they also did some of the best, most sincere and simplest love songs ever, such as "Let Your Love Flow," in which they went profound: "Let your love bind you to all living things." That is a lot to ask, I realize, but as a stopgap measure you can listen to these great songs, again or for the first time.

(1) "If I Said You had a Beautiful Body Would You Hold It Against Me?"

—"Resoundings" will consist of short re-introductions of artists who, in his ancient period, "Professor" Sartwell still loves, but who’ve been de-canonized or at least neglected in retrospect. Future installments: Augustus Pablo, the Kendalls, Ann Peebles, the Persuasions.