Throw Tom Waits, Thelonious Monk, and Kurt Weill into a blender, and it still doesn’t fully capture the essence of Boister. 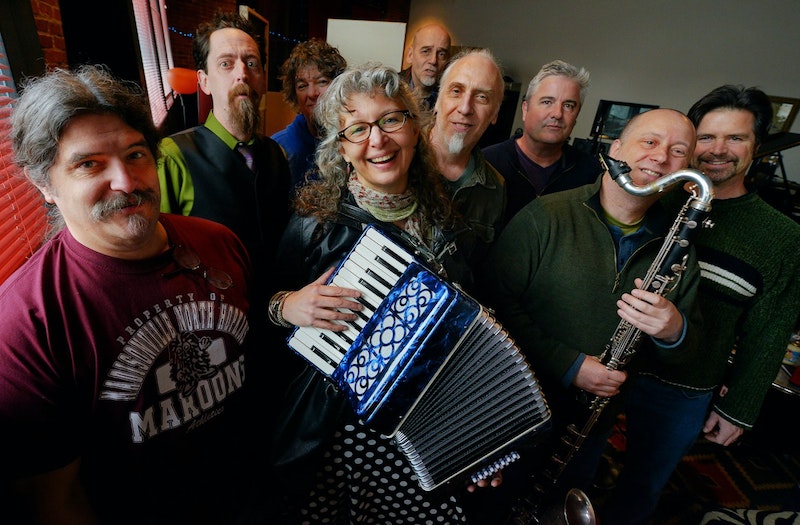 Boister, the nine-piece band led by Anne Watts, has been around for over 20 years, and their latest album Goddess of the Baltimore in Your Mind further solidifies their reputation as one of Baltimore’s best bands. It has everything that makes Boister great: tight musicianship, Craig Considine’s blaring trombone, Watts’ rich voice, poetic lyrics, and a music range that goes from slow piano ballads to uproarious stompers.

The album starts with the soothing piano ballad “Lenten Rose.” “You’ll have to be a Lenten rose,” Watts softly sings, “you’ll have to be a flower blooming in the cold.” The song also features beautiful background vocals from her daughter Posie Lewis, especially near the end when she sings, “Oh, how a rose e’er blooming.” As Watts explained on her radio show, a Lenten rose stayed in bloom in her garden throughout the winter months following the 2016 presidential election, so the song is a word of encouragement to stay strong through tough times.

Watts often uses nature as inspiration for her lyrics—the title of Boister’s 2008 album Some Moths Drink the Tears of Elephants came from something she read in one of her son Levi’s National Geographic for Kids magazines—and nature metaphors are present throughout this album. The song “Jane” paints a picture of Watts’ late aunt’s struggles in the lyrics, “She watches as the moon obscures the sun like a shroud/ocean waves are pounding/against the windowpane/and the water rushes in.”

Another recurring motif is summer turning into winter and vice versa. In “Laura Leigh” (about local musician and theater director Laura Leigh Todd), Watts sings, “Summertime will come and take you down/down to the riverbed, where we were young,” and in “Wait” she tells an unknown person, “Summer is gone, and the fallen leaves/clutter the ground, 'neath the sleeping trees.” The idea of staying steadfast during changing times is a common theme in Watts’ lyrics, especially in the song “Raid,” which Watts says was inspired by both Posie’s reluctance to leave home for college and a friend trapped in a bad marriage. Watts offers words of comfort to both situations singing, “You stay here, and I’ll go raid the dark for you.”

The album gets funky with the title track, which Watts wrote for her best friend Sally, a bartender in Baltimore. The band plays with polyrhythms and tonality throughout the song’s seven minutes, going from up-tempo funk to fast bossa nova to a slow march just within the first two minutes. The song was originally called “Goddess of the Hollywood in Your Mind” because of its bombastic sound, but Watts’ husband John suggested changing it to Baltimore, which turned the song into a tribute to the city. Following the song is the instrumental “Sister Odessa,” written for the late saxophonist Arthur Blythe. It’s a bluesy romp featuring solos from Considine on trombone, Warren Boes on guitar, and John Dierker on bass clarinet, showcasing the band’s tight musicianship. Everyone has a chance to express themselves without stepping over each other.

The album ends with “Rational Mind,” which Watts calls this her “dystopian tune.” “Finish your meal and grab your coat,” she sings, “this old town is just about to explode.” The music is very dream-like, with Boes providing atmospheric electric guitar in the background. Watts invites the listener to “leave the confines of the rational mind,” and instead live more from the heart, which is something she thinks is undervalued in society. As the song gently ends, the listener gets the feeling of leaving the rational mind after experiencing the album’s 41 minutes of musical transcendence.