Why It May Not Suck: Michael Bay’s Pain & Gain

Torn between thinking Michael Bay’s Pain & Gain is the best movie about bodybuilding and one of the worst things I’ve ever watched. 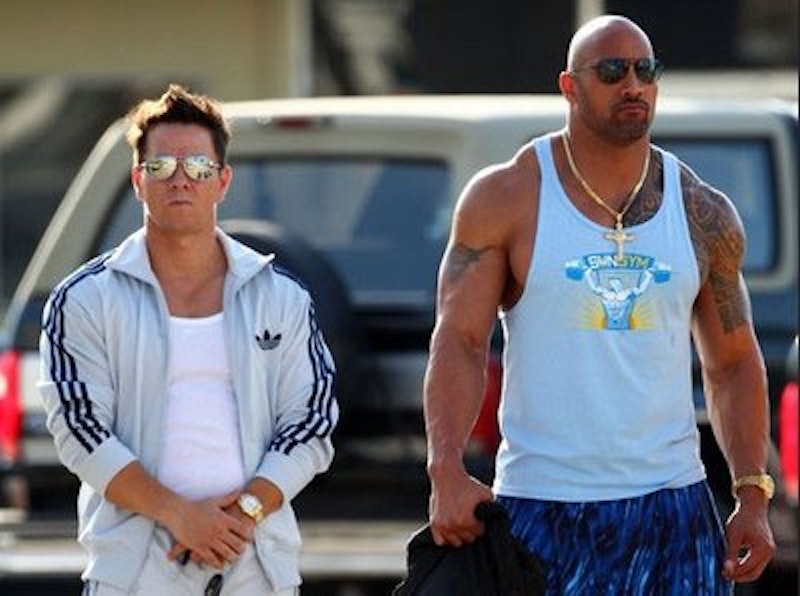 Although professionally trained and reasonably well-educated, Michael Bay has directed only the worst movies. Movies so wretched that he sometimes apologizes for them. Movies that, even when ostensibly "good" (like The Rock, which is somehow part of the Criterion Collection), achieve said goodness through bombast and craptacularity rather than any genuine engagement with or concern for the material.

That's fine. We all aren't destined to follow in the footsteps of Ingmar Bergman or Peter Watkins, which is for the best since most of that work, while undeniably great, is taxing on the attention span. Even a person such as myself, who can devote 20 straight hours to something as mind-crushing as Europa Universalis IV without so much as batting an eyelash, would be hard-pressed to tackle all 300 minutes of Bergman's Fanny and Alexander in a single sitting.

It was in the spirit of watching some brisk, entertaining badness that I paid $5 to stream Bay's forgotten 2013 trash-rock opus, the horribly-titled Pain & Gain. The film is loosely based on a series of events that you can read about in a Slate article. However, the historical accuracy of the film, at least for the purposes of this essay, is irrelevant. Neither do I feel the need to comment on whether Bay glamorizes the activities of the "Sun Gym Gang" beyond noting that, my goodness, look at how pathetic these cartoon characters are.

Instead, I’ll address how Bay explored issues of masculinity in the course of making a film that, while every bit as slickly-produced and vapid as his previous offerings, sometimes had me convinced I was watching a minor masterpiece.

The Daniel Lugo of the film, Mark Wahlberg's Daniel Lugo, is a brainless con artist who believes that anything’s possible here in the "buffest nation on earth." The body Wahlberg developed for the role is perfect: it’s not the body of the bodybuilding professional, the Ronnie Coleman/Jay Cutler build with the giant human growth hormone-fashioned abdominal wall that pokes out like a bizarro beer belly, but rather the squat and overstuffed physique of the somewhat committed amateur poseur. I know this body because it's the body I’ve inhabited, with periodic ups and downs, for the past 12 years. And I know this body is nothing special.

Lugo, however, believes that this lone and meager achievement, namely the cultivation of a physique that might have won the pre-steroid era 1942 AAU Mr. America, has destined him for greatness. He’s a "doer," a fact he realizes at a motivational seminar hosted by Ken Jeong, and the rules that apply to the morbidly obese and frighteningly thin people for whom he serves as a "professional spotter" do not apply to him.

Anthony Mackie's Adrian Doorbal is another recognizable type: consumed by feelings of inferiority stemming from his apparent micropenis, Doorbal overcompensates by abusing steroids and planning to undergo a phalloplasty. He lusts after voluptuous women, but succeeds in winning the heart of Nurse Robin Peck (Rebel Wilson) only when it becomes clear that he’s financially secure. He’s the least criminally-minded of the culprits, yet complies eagerly with Lugo's kidnapping scheme, in principal part because he hopes to prove and thereafter enhance his manliness.

Paul Boyle, the character played by Dwayne "The Rock" Johnson, is the largest and most intimidating of the three, and clearly the most ill-at-ease in his massive body. He’s huge and violent, filled with unspeakable passions and a vague, abiding desire to "do good." Physical outbursts are his ultimate solution to all problems. In spite of this untameable rage, he wants to be perceived as "soft," yet remains too "hard" to be anything but a lumbering, doomed goon.

The other men who populate the film, ranging from Rob Corrdry's washed-up, horndog ex-bodybuilder gym owner to Tony Shalhoub's arrogant, egotistical Jewish millionaire, all seem equally deserving of the punishments meted out to them. Only an ostensibly "natural" man, the detective Ed Du Bois (Ed Harris, channeling the stoic cool of some old noir actor who looked like Harris... Edward Robinson in Double Indemnity, maybe?) can bring this tragicomedy to a close. No lessons are learned—Lugo, in fact, uses the trial to give an impassioned and idiotic speech about the American Dream—and the guilty are mocked, punished, and, in the cases of Lugo and Doorbal, sentenced to death.

If one looks carefully, peeling back the lurid technicolor layers of Bay's glorious one-upping of the grossly overrated Coen Brothers, at base this movie is concerned with exposing the fatuousness of post-Pumping Iron muscle-manliness. As the police come to arrest him, Daniel Lugo is doing Roman chair sit-ups and screaming about how "hard" he is. At other anxious points in the film, he pauses in his illicit activities to "get a pump." His self-confidence is nearly unshakable and utterly misguided. Only when individuals such as the adult filmmaker he’s attempting to defraud question Lugo’s intellectual bona fides does the bodybuilder lose his cool. At no point, however, is he in charge of any situation: he’s always as schlubby, out-of-place and dumpy as his large-but-not-enormous physique makes him look when he's wearing a short-sleeved button-up shirt.

Lugo's explosive, misplaced pride results from the potent and thoroughly unreflective narcissism that consumes him. He, Doorbal, and Boyle are not really "friends": their most powerful relationships are with themselves. Doorbal and his penis, Boyle and his imagined self-righteousness, Lugo and his genius-bestowing muscles—each is, to quote The Male Body author Susan Bordo, a product of a culture where a man's most enduring bond "involves [himself], his member, and [whatever] has been put on the face of the earth just to get him hot."  Their urges and drives are internal, and they seek to perform on command. For Doorbal this is literally the case, as when his wife gives him injections so that he can sustain an unimpressive erection.

These men don’t caress or really even touch the female characters in the film. Lugo has so little interest in sex that he dupes the European stripper with whom he has been intimate into "taking care" of Boyle for the "good of the mission." At one point, Doorbal, so concerned about the loss of a domestic life in which he may soon recover full use of his phallus, continues to inject an interloping adult film star with horse tranquilizers until her heart stops. Only the retired Du Bois has a normal relationship with his (apparently second or third) wife, in whom he confides his concerns about the case he has begun to investigate.

Is Du Bois the "hero" of the picture, then? Insofar as this farce has one, I suppose so. But Michael Bay's purpose is not to offer a way forward, only to present a heavily stylized portrait of a bunch of men not even half-full. This is probably as close as Bay ever got to directing a Great Movie, and it accomplishes everything that the Harmony Korine-fronted Spring Breakers sought to do, only at a faster pace and with Dwayne Johnson's charmingly over-the-top performance in place of James Franco's. When we watch Pain & Gain, we’re watching stupid men from a stupid culture of faux-machismo behave stupidly, and for some of us, myself included, that state of affairs somehow manages to make perfect sense and no sense at all.