Film Review: On Chesil Beach Suffers From Too Much Padding

Saoirse Ronan and Billy Howle almost save the movie. B- 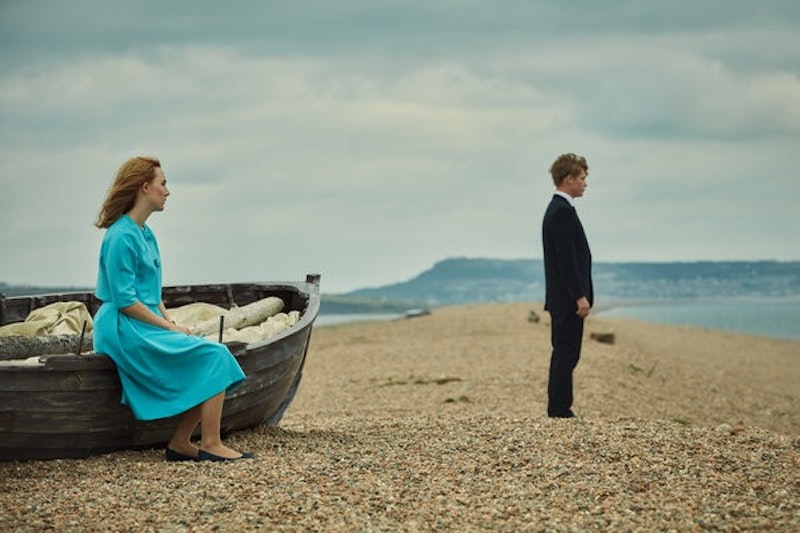 For the second time in the same month, Saoirse Ronan and Billy Howle star in a stately period drama based on respected source material. On Chesil Beach is more successful than The Seagull, better tuned to emotional complexities and performance. Director Dominic Cooke comes from an extensive background in the stage, and understands how to strategically place and move the actors. The film is mainly a two-hander between Ronan and Howle, and even scenes not focused on them tend to play out between only a few people at a time, and Cooke stages the back-and-forth with crisp competency, though not with any great original vision.

Adapted by Ian McEwan from his own novella, the story follows the newly-married Florence (Ronan) and Edward (Howle) on their honeymoon at the eponymous beach in Dorset, England in 1962. Flashbacks fill in what’s brought the duo to this point. Though her family is much better off than his, they’ve bonded through a shared desire to make art (him through writing, her through music) and a more ineffable sense of common trauma. Edward’s mother suffers from mental instability, which Florence can naturally and gracefully handle, while Florence herself comes from a background of abuse that’s more hinted at than plainly stated. But when the time comes to consummate the marriage, Florence’s issues come to the fore—an all but fatal problem in the emotionally illiterate world of the early 1960s.

The film is fighting hard against the interiority of the book. But opening up the world through the flashbacks and expanding the context for the characters’ actions might actually lessen the effect of the story rather than improve it. Much of the film feels like padding, and it may have been better off as a short, in the same way that the book comes in at less than 200 pages. But absolutely no one is willing to distribute shorts, much less put too much effort into them, and so we must get a movie overstaying its welcome, stretching over two hours. This added material does not magnify its emotional impact but dilutes it. A cut of the film solely devoted to the scenes between Ronan and Howle could say the same things in half the running time.

Ronan and Howle together save the film, continually juggling mutual passion with the frustrations of bumping up against the limits of one’s ability to articulate difficult emotions. Florence’s terror of sex is a problem they don’t even have the vocabulary to address—Edward can only furiously dismiss her as “frigid.” The film’s most troubling, lingering idea is that deep love can in fact be irrevocably thwarted by transient frustrations, and that this can leave us with nothing but long-standing regret.

But then, that theme would haunt the viewer more effectively if On Chesil Beach didn’t end with an extended sequence rife with unintentional humor. Skipping forward in time, it unspools the fallout of Florence and Edward’s honeymoon in the most ham-fisted manner, delivering one broad emotional beat after another. And it gets even worse when poorly done old-age makeup comes into play. The lasting effect is not of wistfulness but one similar to Christian inspirational fiction, full of “Oh, if only you had done this” tut-tutting toward the characters. It deflates the forthrightness of the rest of the story, and says aloud what the film could have much more effectively left unsaid.